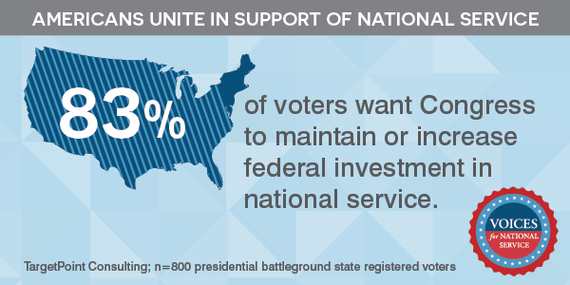 Last month, 75,000 new AmeriCorps members were sworn in to serve in communities across the country, pledging to do what they do best: use their energy and talents to improve communities, impact lives, and tackle some of the biggest challenges facing our nation. 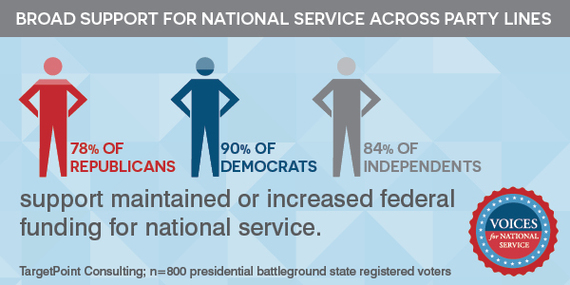 Each of these constituencies overwhelming agreed -- by better than 4 to 1 margins -- that such an investment yields important gains for the country, including preparing young people for the workforce, building stronger neighborhoods and communities, replacing government handouts with local, volunteer-based, community work, and empowering people to be more self-sufficient and less dependent on the government in the long run (AmeriCorps members earn a college scholarship worth $5,775, helping them to meet the ever-rising costs of college tuition). 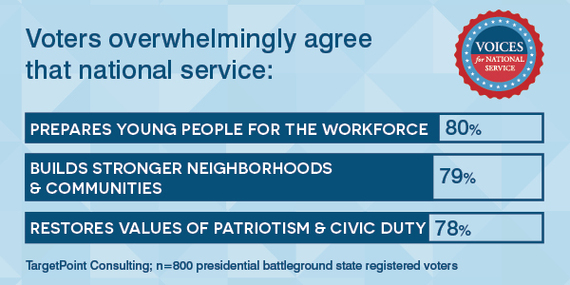 Despite this support, AmeriCorps and Senior Corps are in real jeopardy. The U.S. House and Senate Appropriations Committees are considering dramatically reducing the federal investment in the Corporation for National and Community Service (CNCS), the federal agency that administers AmeriCorps. The proposals being considered would reduce AmeriCorps by up to 25,000 positions, meaning significantly fewer local "boots on the ground" to strengthen education from preschool through college, help communities recover and rebuild after natural disasters, support veterans and military families, combat poverty, assist seniors in independent living, and build economic opportunity for individuals and communities.

The American people have faced the threat of national service elimination before, and we have won. We've won because the infusion of high-impact, cost-effective people power brings help, hope, and, most importantly, results to communities across our nation, leveraging private support and community volunteers along the way. The bang for the buck is compelling and badly needed: economists in this Columbia University study estimate that every dollar invested in national service generates almost $4 returned to society in higher earnings, increased output, and other community-wide benefits.

So as our members of Congress debate the merits of investing in national service and as presidential hopefuls unveil more details about their plans for the country's future, they should know that a commitment to increasing the funding for national service is not just one that resonates with voters across the political spectrum -- it's one they actively want.