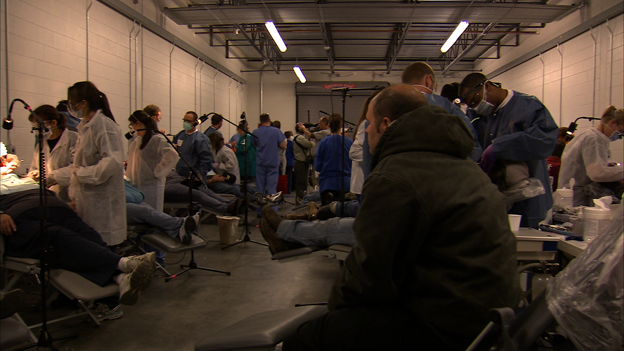 In the wake of Senate Minority Leader Mitch McConnell's callous and very public proclamation on Fox News Sunday that providing health care coverage for 30 million uninsured Americans "is not the issue", it's disturbingly necessary to reiterate: the fact that 30 million Americans live in pain, constant fear of becoming ill, and may even die of treatable conditions because they don't have basic health care coverage is, in a first world nation, the only issue. While this should be self evident, McConnell's statement only added fuel to a lingering suspicion that to some politicians the health care "issue" is just one more partisan identity signifier, when health is by definition about people, not politics.

I witnessed the visceral need for care firsthand this April while filming a documentary about a free "pop-up" medical clinic set up on the NASCAR Motor Speedway in Bristol, Tennessee by an organization called Remote Are Medical. While McConnell so blithely dismisses the importance of providing insurance for all Americans, thousands of his constituents and others from Tennessee, Virginia, West Virginia, and beyond flock to these clinics for medical, dental, and vision care they couldn't hope to receive otherwise. The feature-length Remote Area Medical documentary is in the works (expect it in early 2013), but in the meantime, here is a three minute clip that illustrates what goes on at a clinic:

Do you think the woman who slept for twenty-four hours in a parking lot to get her first visit to a dentist in a decade, just hoping she was early enough to make it inside, cares if her provider is a Republican or a Democrat? Probably no more than her volunteer dentist (all RAM clinic providers are volunteers, and some travel from further afield than the patients to donate their time) cares if she is a Libertarian, Muslim American, immigrant or anything else one has the right to be in this country. Perhaps I'm naive, but it is difficult for me to understand how politicians of every party can't simply agree that a person in need should be able to see a dentist some time before their only option is the extraction of an entire row of teeth and a prescription for dentures that are comically unaffordable for someone who couldn't even pay for a cleaning.

In my three days at the Bristol clinic, not a single local politician came to see what their constituents had to endure just to get their blood pressure checked or have their chest X-rayed; the RAM team says that that is usually the case. Here is what they might have learned if they had made the effort:

1) The need is greater than I had ever possibly imagined, and I am originally from Bangladesh, one of the poorest countries on earth. The knowledge that the resources and infrastructure are available here makes the sight of people lining up by the thousands for a donated pair of glasses so incongruous with our country's perceived wealth. Many of the volunteers and doctors I spoke with noted that knowing the numbers of the uninsured was one thing, but meeting the struggling patients face-to-face was something else entirely.

2) The demographics of these clinics are not what you might expect. The full or partial lack of care is so widespread that there is a much greater mix in the financial backgrounds of patients. RAM patients are not always homeless or unemployed; the vast majority work but have come to the cruel realization that simply working hard in America is not enough to get by anymore.

3) The ramifications of being uninsured go far beyond physical health and discomfort. People missing half their teeth, or essentially unable to see because the best they can do in terms of vision is a $9.99 pair of readers from the neighborhood pharmacy, are not going to get hired in a sluggish economy and so can do nothing to better their situation. Similarly, certain issues of pride and self-image are tied up in deteriorating or neglected health. Val Crosby, who we featured in the Remote Area Medical clip above, used to work as an assistant bank manager but was unemployed and unable to kiss her husband for over a year because her degenerative dental condition had become so visible and painful.

4) Seeing people's health care needs brings up uncomfortable questions about class in American society. Who receives care and who does not? What does it mean to be middle class in the U.S., and what does it mean to be one of the working poor? How clear is that distinction anymore? What does poverty in America look like? It is too easy to ignore the daily reality of this large swath of our population and act like their plight is an anomaly. The world knows that we are not taking care of our own.

5) One of the most painful lessons learned during the shooting of Remote Area Medical is that no matter how wonderful a job RAM may do, no matter how much they toil and persevere, it can never possibly be enough. These generous volunteers make miracles happen in the middle of a racetrack, a fairground, a high school, or any other public space that happens to be available, but there just aren't enough miracles to go around. RAM could never accrue the resources required to become primary care for everyone who is currently falling through the cracks, let alone every hopeful patient who shows up at every clinic, and our film will show the painful consequences for those who are turned away without care. Institutionalized charity will never be the answer. The good folks at RAM love to say their greatest hope is that a better system will come along and put them out of business

While Obama's Affordable Health Care Act is far from perfect, the Supreme Court's decision to uphold it last week still felt like a triumph, not for Obama or for Democrats, but for all of us, because it signified an acknowledgement of our broken system and a promise to begin fixing it. The question is, are the people responsible for doing so really committed to seeing the ACA as a first step to be built upon as quickly as humanly possible? Or will it take another four years to inch closer to the kind of coverage and access that people need right now? Yes, it is absolutely crucial to aim towards tangible, realistic solutions, and to consider the political ramifications of any system that is put in place, but how can we possibly do that if we turn individual lives into an abstraction, making it a battle of words and ideologies while closing our eyes to immediate needs and the neglect of basic human rights taking place within our borders?