It's time to stop brushing things under the rug and face up to glaring problems among Britain's Muslim population. 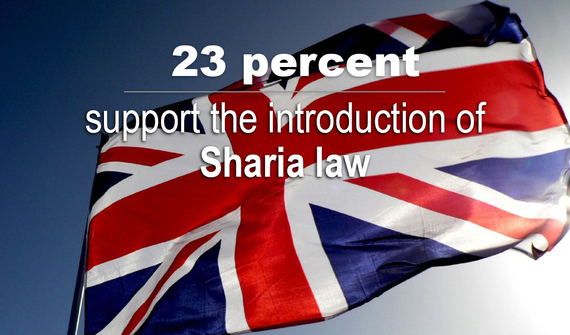 UK's Channel 4 recently commissioned an exhaustive survey titled "What do British Muslims really think?" The results, published by the reputable polling company ICM Unlimited, span over 615 pages of damning evidence that reveal just how acutely social integration of Muslims in Britain has failed.

Although much of the extensive results confirm that British Muslim attitudes align, for the most part, with the rest of Britain's populace, the few disparities are immensely significant in demonstrating the depths to which extremism and extremist thought is rooted within the British Muslim psyche.

Among the more promising results, 86 percent of those polled feel a strong sense of belonging in Britain, 91 percent said the same for their area, 88 percent said Britain was a great place to live, and 78 percent showed interest in integrating into British life.

Great, so what's the problem?

Among the most publicized results were those relating to homosexuality, with 52 percent of those polled saying that gay sex should be made illegal and only 18 percent agreeing on its current legal status. Many are taken aback by these results, yet these were perhaps the least shocking from the survey. The acceptance (or non-acceptance) of homosexuality has less to do with being Muslim and more to do with falling outside a certain age bracket, a dynamic that the survey fails to factor in.

But this cannot mean that this statistic should be taken lightly, especially when almost half, 47 percent, deem it unacceptable for a gay person to hold a teaching position. Personal views are one matter, but when half of the Muslims in the country (including employers, decision-makers, etc.) judge an entire group of people on something as private as sexual orientation it opens the floodgates for unending discrimination and bigotry.

As Muslims are loud and unwavering (and rightly so) in exposing injustice when they themselves are at the receiving end of discrimination, why hesitate to extend that courtesy to others?

Another worrying stat that has emerged from the ICM poll indicates that 39 percent of British Muslims believe wives should always obey their husbands. This sets a disturbing precedent for women in mentally and physically abusive relationships to be rendered incapable of leaving potentially violent situations because of the misogynistic worldview they've been indoctrinated with (and which most certainly isn't the Islam I was taught).

Nearly a third (31 percent) believe a British Muslim man having more than one wife is acceptable, yet challenge that idea with the reverse (women keeping more than one husband) and you'll be met with disgust at daring to think such scandalous nonsense.

Such ideas may seem irrelevant in British society today where law rules supreme over religious ideology, yet it is beliefs such as these that, if unchecked and unchallenged, can plant the seeds of misogyny in generations of British Muslim men to come.

Aside from the ultra-conservative social attitudes, the survey found alarming levels of Islamist ideology embedded within British Muslim circles. Nearly one quarter of those polled (23 percent) support the introduction of Sharia law, more than a third would not completely condemn those who practice stoning as regular punishment for adulterers, and an appalling two-thirds would not tip-off the police if someone they knew was planning to join ISIS.

"We are more nervous about Muslims because we feel people will be offended. But my view is that looking at the results of this survey, which have surprised me, that we have gone beyond the situation where we can say, 'OK, don't worry; they will come round in time,' because that is not going to happen. We have to make things change now."

As a British Muslim, I couldn't agree more with Phillips.

Self-awareness and the courage to accept your own shortcomings are imperative first steps to any improvement we can hope for in ridding British society, and the world, of the plague that is extremism--be it social or political. We cannot make any progress until we first accept and define, in no uncertain terms, what we stand against and the values we stand for.

We may criticize Trevor Phillips for his remarks, we may criticize Channel 4 for its messaging, we may poke holes in ICM's methodology, but we cannot deny that these troubling thought patterns exist in British Muslim society.

All data is sourced from ICM Unlimited's publication.