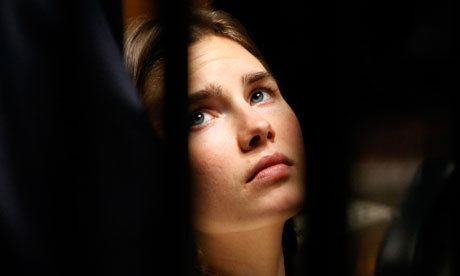 Amanda Knox is innocent of murder.

As a reader, you may have already chosen a side, since some have made this a battle of culture and evidentiary ping pong. Either you agree with my assertion of innocence or you don't, but there's a bigger social issue at play here: People's lives are being ruined by sexism and lies.

I am making an appeal to all feminists and people of rational thought: We need to speak out, regardless of our beliefs. Beyond the fact that no credible or realistic evidence places Knox or her then-boyfriend Raffaele Sollecito at the scene of Meredith Kercher's murder, Knox's very average sexual behavior and our sexualization of her image should not be spearheading the campaign against her.

When I ask people what they think about the case, most of them say, "It's obvious to me that she is innocent!" yet rarely do people discuss the treatment of Knox or the impact this case will have on others or society in general. Why is it OK to lie to someone about their having HIV only to attain a list of sexual partners which would then be leaked to the media? This is an example of systematic character defamation -- the modern equivalent of throwing an accused witch into the lake to see if she drowns. What sort of pain must we put others through in order to forge our own versions of the truth?

Let's pretend for a moment that Amanda Knox is guilty. Would her sexual partners or attractiveness matter? No. All that would matter is her culpability; you certainly don't need to be pretty to commit murder. But the fascination and objectification of Knox's "bad-girl" persona (when purposefully created and pitted against Kercher's "good-girl" persona) has constructed a sort of cinematic set of lies. Is Italy afraid that a good-looking American girl actually isn't a threat to the very fabric of modern society? It seems yes.

Knox and Sollecito's lives will doubtfully be untainted by this miscarriage of justice, but we still can learn from the case. First, though, we should know how not to talk about it.

Just a few days ago, Jezebel -- a blog for women -- published a piece, "The 12 Ways We Are Amanda Knox." While the author, Tracie Egan Morrissey, believes Knox is innocent, the article is silly, lazy and downplays the significance of the issue. I have hope that feminist journalists will start taking this case more seriously. I have hope that we will consider the repercussions of sexism when we take to social media to discuss the case. I have hope that we can look past pot and sex.

If that seems judgmental, it's because we as a society -- and perhaps we as feminists -- have failed Amanda Knox. People ask me why I care about this case. It is because I am a human and a feminist.

In 2007, Knox was being held in -- and consequently convicted to -- an Italian prison cell until her 2011 acquittal (she is now convicted again). In 2007, I was in college and I'd seen the headlines -- things like Satanic Ritual Gone Wrong and Gory Sex Game Leads to Murder. I remember thinking, this just doesn't add up. There's no basis for this assumption! They said she was a liar, which reminded me of a time when I was much younger and dealing with a legal case. While my experience had nothing to do with murder, I was, for all intents and purposes, considered a liar, a young girl with a bad M.O. I was slut-shamed for reporting a child-molester. She has to be lying. She wanted the attention, they said. She made the other girls lie, too.

Why are we, as a society, so quick to sexualize and blame victims on the very basis of gender? Why must we live by some imaginary angel/whore binary?

This case jolts me in other ways as well. As an Italian-American, I am ashamed and saddened that this fiasco has painted, for some, a revolting picture of Italian culture. Italians aren't barbarians without a sense of logic, but this case isn't helping the image. The trial of Knox and Sollecito has exacerbated the idea that many Italians are operating a witch-hunt run by stubborn, macho and misogynistic character-assassins. I cannot help but agree.

When Italian authorities celebrated the capture of Kercher's murderer early on in the trial (due to Knox's forced false confession, which implicated her employer Patrick Lumumba) the Italian "authorities" were revered as heroes. They had "solved" the case! They had brought justice to poor Kercher, whose bloodied, battered body called for peace. More so, and perhaps more importantly, they had caught the attention of the world, who watched as the small, rustic city of Perugia closed the case on something truly awful.

Couple this false "triumph" (it was not Lumumba after all, but Italy was already boasting) with botched forensic analysis, undeniable Italian nationalism and a bad feeling about a pretty American girl, and you have a media circus.

The prosecution's theories have changed and morphed over the past seven years; they've included sexual and Satanic motives (thanks to Mignini, the God-fearing prosecutor who has been known to use psychics as part of investigations), disputes over housework and personality and a spontaneous desire to kill. Just because the newest claims include a murderous "quarrel" involving stolen money doesn't mean we should forget the storm of sexism that set the tone for the case.

"As you may have read, and were most likely well aware of, the general consensus is you are absolutely smoking hot," Michael Kulich, the company's founder, wrote.

This offer made the news, sure, but the sad matter is that it barely shocked anyone. This is a woman whose life has been turned upside down by a wrongful conviction, and all we can think to do is comment on her looks? If Kulich sat in prison for four years for a crime he didn't commit, would he think his gesture so clever?

Like all murder cases, the facts should dictate the proceedings. The defendants shouldn't have to go on trial for their lives, their interests and their sexuality -- especially when it doesn't relate to the crime. But this isn't a normal murder case. This is an inquisition.

One fact -- perhaps the only fact we need to know -- is that Rudy Guede murdered Kercher. Another fact is that he partied in Perugia and fled to Germany immediately after the murder. Yet another fact was that his DNA was found on Kercher's body and in the room, while Knox and Sollecito's DNA was not. Guede admitted to being at the scene.

The DNA evidence for Guede and lack thereof for Knox and Sollecito isn't magical or a due to a fantastic bleach-clean-up (you can't see DNA). These are simply facts that have been ignored, manipulated and lied-about, not only by the court but by lazy reportage.

Asserting that Knox and Sollecito casually, you know, joined a criminal for a night of murder-and oh, yeah, maybe a bloody orgy-defies logic and lacks motive. The "facts" have been manipulated to fit the "theory." In this case, 2+2=5.

Just look at this list of Knox nicknames. How is it that most revolve around her sexuality, when Guede is most certainly the rapist and murderer? Knox has been called everything from "evil temptress" to "Luciferina" to "she-devil with an angel face."

Why have we turned her into a filthy, sex-obsessed slut and why aren't more journalists, writers, advocates and lawyers speaking up about this? Why should Knox have to explain her sexuality to Diane Sawyer?

This seriously flawed case is teaching us that we can be punished for being sexually active or good looking, and that it's OK to draw parallels between "sexual deviance" and homicide.

This case hinges on not only ignored and circumstantial evidence but preconceived notions and cultural expectations of "the good girl."

When people talk about Knox's reaction, they're placing a gendered expectation on her: Should she have been weeping publicly and often? Should she not have kissed her boyfriend? Would only a horrible she-devil derive pleasure while her roommate is dead in the morgue?

How we experience and move-through trauma is personal. It is not up to anyone to determine how one should behave during difficult times. Knox was 20 years old, an age somewhere between the never-land of youth and the terror of adulthood. Are we, as women, expected to be sensitive, sad and weak? I rarely hear critics discussing Sollecito's post-murder behavior. So Knox did a split and kissed her boyfriend? I would have done the same.

All other "evidence" is circumstantial or forced.

A grainy CCTV video, "pale eyes," a school-aged nickname and a few sexual partners does not a murderer make. Most women I've spoken with have indulged in far more drug use and have had far more sex than Amanda Knox has had, but because this is a modern-day witch-hunt we're talking about, Knox will continue being one of the most slut-shamed people in major media.

When you search "Amanda Knox" on Twitter, you'll see just how angry, uninformed and irrational some people are. 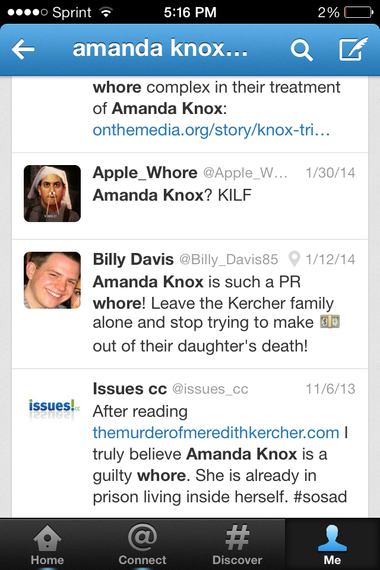 And if the public is being fed inaccurate information by the media (because Italy's judicial system is all about false and circumstantial evidence) they aren't going to know how to discuss the facts either. Social media has made it easy to report error and exaggerate information, and we should be using it for good. We should be taking a stand against these sexist allegations.

However, sexism isn't the only problem here. There's the issue of race -- only we're focusing on the wrong elements.

When people talk about racism and this case, they point to Knox's naming Patrick Lumumba as murderer. This is understandable without further information. Wrongful convictions based on race are all too common.

We should remember that Knox was interrogated for many hours without food or water. She was slapped and screamed at in Italian -- a language she barely understood at the time. When the police found her text message (which said the English equivalent of "goodnight, see you another time") with Lumumba, they psychologically tortured her and coerced her into confessing that he was involved in the murder. If her text message was sent to anyone else of any race, the same would have occurred. She named him because they named him. More so, false confessions aren't rare. According to the Innocence Project, "In about 25 percent of DNA exoneration cases, innocent defendants made incriminating statements, delivered outright confessions or pled guilty."

The real racial issue is this: Perhaps we wouldn't even be talking about the Knox case if she wasn't white and beautiful. This world spins on a white, heteronormative, image-obsessed axis, as does the justice system. In 2011, civil rights attorney Lisa Bloom told Larry King Live that society ought to be outraged by fact that pseudo-confessions and scant evidence would prosecute a young black defendant but slide under the radar of major media. Bloom is right. We need to stop paying media attention to only those cases where white is the central color. We need to be open to our flaws as people and as a system in order to jumpstart any change. We can begin by speaking up.

When we learn how to fairly talk about this trial, we will be able to see clearly -- or at least as clearly as possible -- through the mire Italy has left in its wake.