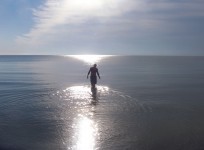 The Practice:
Be the body.

As a kid, I was really out of touch with my body. I hardly noticed it most of the time, and when I did, I prodded it like a mule to do a better job of hauling "me" -- the head -- around.

This approach helped me soldier through some tough times. But there were costs. Many pleasures were numbed, or they flew over -- actually, under -- my head. I didn't feel deeply engaged with life, like I was peering at the world through a hole in a fence. I pushed my body hard and didn't take good care of it. When I spoke, I sounded out of touch to others, emotionally distant, even phony; my words lacked credibility, gravity, traction.

Because of these costs, I've worked with this issue and come to appreciate the benefits of being aware of the body, coming down into it, inhabiting it -- most fundamentally, being it.

For starters, being the body is simply telling a truth. What we experience being -- thoughts and feelings, memories and desires, and consciousness itself -- is constrained, conditioned, and constructed by the body via its nervous system. The fabric of your mind is woven by your body.

Further, being aware of your body and its signals gives you useful information about your deeper feelings and needs. Tracking your body's subtle reactions to others also tells you a lot about them.

Coming home to your body helps you feel grounded, and it gives you reassuring feedback that you're alive and basically alright. It's exhilarating to feel the vitality of the body, even sitting quietly, and to experience the pleasures of the senses.

In particular, experiencing your body as a whole -- as a single, unified gestalt in awareness, with all its sensations appearing together at once -- activates networks on the sides of your brain. These lateral networks pull you out of the planning, worrying, obsessing, fantasizing, and self-referential thinking -- "me, myself, and I" -- that's driven by another neural network in the middle of the brain. Consequently, abiding as the whole body draws you into the present moment, reduces stress, increases mindfulness, and lowers the sense of self to help you take life less personally.

First off, a caution: for some people, it's disturbing to experience being the body. In particular, this is understandable and not uncommon for people who have chronic pain, a disability, or a history of trauma. If this applies to you, try these practices carefully, if at all.

But for most people, it feels good and brings value to be the body. And there are numerous ways to deepen the sense of this:
Wherever we go, whatever we're doing, there's always a doorway to a deeper sense of presence and peace: being the body.

Rick Hanson, Ph.D., is a psychologist, Senior Fellow of the Greater Good Science Center at UC Berkeley, and New York Times best-selling author. His books are available in 26 languages and include Hardwiring Happiness, Buddha's Brain, Just One Thing, and Mother Nurture. He edits the Wise Brain Bulletin and has numerous audio programs. A summa cum laude graduate of UCLA and founder of the Wellspring Institute for Neuroscience and Contemplative Wisdom, he's been an invited speaker at NASA, Oxford, Stanford, Harvard, and other major universities, and taught in meditation centers worldwide. His work has been featured on the BBC, CBS, and NPR, and he offers the free Just One Thing newsletter with over 115,000 subscribers, plus the online Foundations of Well-Being program in positive neuroplasticity that anyone with financial need can do for free.