After the January 12 earthquake in Haiti, Western leaders announced bold blueprints for building a "New Haiti." This reconstruction, they emphasized, would be "Haitian-led," based firmly on the principle of respect for "Haitian sovereignty" and carried out through "full and continued participation" by Haitians, "consistent with the vision of the Haitian people and government." At the March 31 International Donors Conference Towards a New Future for Haiti at the UN headquarters in NYC, nearly 10 billion dollars were pledged for Haiti's recovery. Nicholas Sarkozy -- the first French president to visit Haiti since the latter won its independence from French colonial rule -- proclaimed during his historic February 2010 trip to Port-au-Prince, "International aid must be massive and be there for the long term." 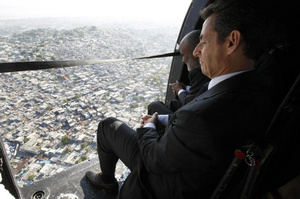 "Now is the time to step up our investment in Haiti," Clinton reiterated in April at an Inter-American Development Bank meeting in Washington, D.C. Yet six months after the earthquake, the plan for a "New Future for Haiti" (a "Haitian-led" effort which is curiously being funded under World Bank oversight, through a commission whose 20 voting board members include only seven Haitians) seems remote indeed.

A partial index of the West's "humanitarian efforts" in Haiti so far: