The “D.C.” in Washington, D.C., might now stand for “dirt collapse,” thanks to a sinkhole recently discovered on the North Lawn of the White House.

Voice Of America reporter Steve Herman first noticed the hole, and he says it’s getting bigger by the day.

“It was noticeably bigger between Sunday and Monday,” Herman told Quartz. “It’s more than a foot long right now.”

A second sinkhole has since opened up next to the first one, he said.

This week I’ve been observing a sinkhole on the @WhiteHouse North Lawn, just outside the press briefing room, growing larger by the day. pic.twitter.com/BsFUtxFqpB

Erosion and water drainage can cause sinkholes, which sometimes grow large enough to swallow whole buildings.

The White House did not immediately reply to HuffPost’s request for comment about the sinkhole.

However, the sinkhole’s location in D.C. ― a city described as a “swamp” of corruption ― did not go unnoticed by Twitter users.

The First Lady had kidney surgery (pissed off), 45 worried re leaks (literally & figuratively) & now this there's a SINKHOLE!!! Metaphors abound!

The swamp is rising

An actual sinkhole has opened on the White House lawn. It’s growing. And it's actually just hell opening up to welcome back it's children. https://t.co/NH6jZ2B90M

It's not like a growing sinkhole right outside the press briefing room at the White House has any existential meaning to it at all, right?

“It was noticeably bigger between Sunday and Monday, it’s more than a foot long right now. A second sinkhole has opened up right next to it." Clearly it's a sign form God that the White House is a swamp that needs draining. https://t.co/MTGj6i38no

Some people had theories. Lots of theories.

Whoa! Maybe it's the GOP rats leaving a sinking ship?

Melania's escape tunnel has caved in.

We all know who backed up the septic system @WhiteHouse and it wasn't Obama.#MAGA#Sinkhole pic.twitter.com/YSHleTXqyN

Some actually rooted for the sinkhole.

RT if you would be ok rebuilding the white house if trump literally disappeared from the face of the earth https://t.co/NLV07Y97Lq

never thought i'd ever find myself rooting and cheering for a sinkhole, but, well, here we are, y'all https://t.co/Ev0p0n9fdD

Please let it be the biggest and best sinkhole. A beautiful sinkhole.

Others made bold predictions about what would happen next.

CORRECTION: A previous version of this story indicated that Washington is built on a swamp. It is not. 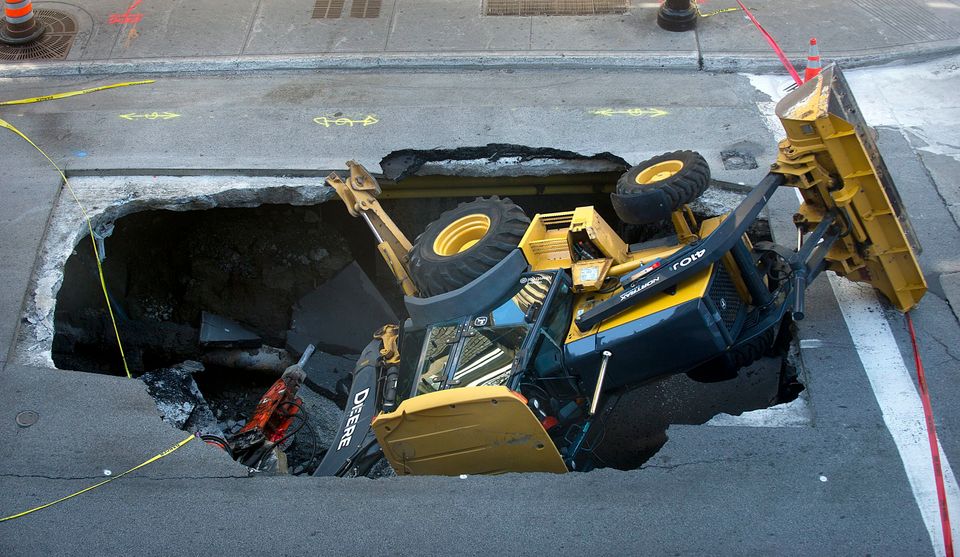