A sensible election administration reform is quietly sweeping the nation. According to the National Conference of State Legislatures, 18 states have implemented or recently adopted online voter registration, either initiating a new registration or updating an old one. Twelve other states have legislation winding its way through the legislative process. The reform is bipartisan in that both Democratic- and Republican-controlled state governments have adopted it, from Arizona to Maryland.

A substantial number of people -- 124,819 -- used Maryland's online system from the date the system went live on July 1, 2012 through the most recent date where I have data, April 11, 2013. Among these, 39.8 percent used the online system to initiate a new registration and 60.2 percent updated an existing registration. 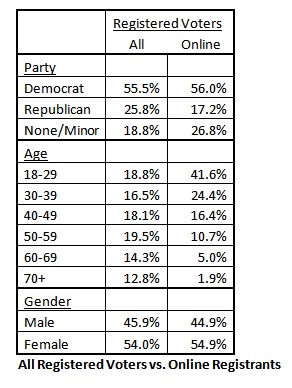 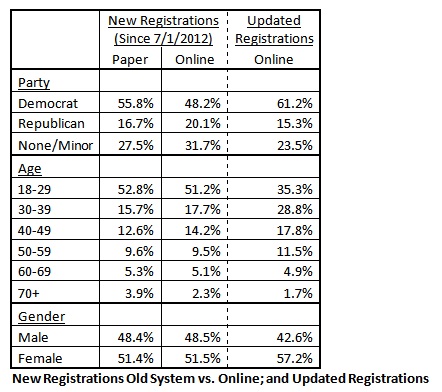 Those using the online system to update an existing registration are strikingly more likely to be female -- by 5.7 percentage points -- than those who use the system to initiate a new registration. They are also strikingly more likely to be a registered Democrat -- by 13.0 percentage points -- and tend to be older. Reflection of those who need to update their registrations may at least partially explain these patterns. While some are people who have recently moved, some are also women who are recently married, adopted their husband's last name, and need to change their last name.