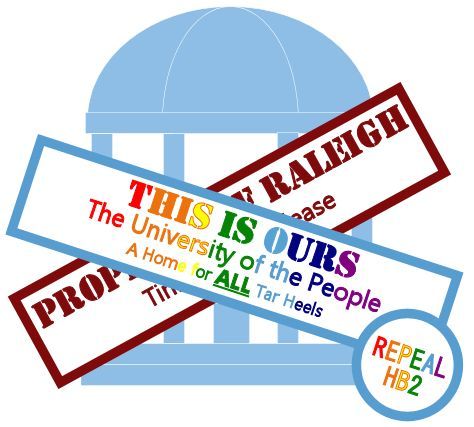 In North Carolina, the re-convening of the General Assembly for its short session on Monday was a conspicuous day in the fight over House Bill 2. It marked the culmination of a month of protest against the bill and featured Democratic-sponsored legislation to repeal the law (HB965), the presentation of signatures against the bill, and the coupling of anti-HB2 protests with North Carolina's Moral Mondays. The combination of these events, along with a pro-HB2 rally, attracted much-deserved national attention.

However, a month out, we can also now identify the weaknesses in the HB2 coverage. One of those weaknesses has been the lack of discussion about a series of important decisions made by the legislative bodies of the University of North Carolina at Chapel Hill, the flagship university of the UNC system. Just last week, the alleged transphobic actions of the UNC College Republicans quickly drew negative national press. Yet, at the same time, a couple of resolutions passed by UNC's legislative bodies failed even to reach our own news organs, despite there being reporters present. As a result, no one has tied these decisions together and considered their significance in the discussion of HB2 (though, see Pam Kelley's related and astute piece in The News & Observer).

Here's what you may have missed: apart from any action taken by the University's administration and the president of the University system, all of the legislative bodies at the University of North Carolina at Chapel Hill have responded to House Bill 2. Most of these bodies have condemned the bill and called for its repeal. All of them have re-affirmed the University's existing non-discrimination policies, which, beyond the categories included in House Bill 2, prohibits discrimination on the basis of gender, gender expression, gender identity, genetic information, sexual orientation and veteran status.

Thus, on March 29, Student Congress unanimously passed a resolution reaffirming the University's existing anti-discrimination policies and calling for the repeal of the bill. On April 6, the UNC Employee Forum discussed the effects of House Bill 2 and re-affirmed the University's non-discrimination policies. On April 12, the Graduate & Professional Student Federation Senate unanimously passed a resolution condemning the bill, reaffirming the protections provided by the current University policies, and calling for the General Assembly to institute protections for all categories included in those policies. And, on April 15, the Faculty Council unanimously passed a resolution affirming the University's non-discrimination policy and calling for the repeal of House Bill 2.

So what? Are these not just additional groups we can affix to the list of those protesting the bill? No. While every stance made against House Bill 2 marks a vital contribution in the movement against an unjust and discriminatory law, the calls by the representative bodies of the University of North Carolina at Chapel Hill are qualitatively different from those of businesses and private institutions. These calls emanate from within the walls of the system, coming from the constituents of a body named in both the legislation and the pending litigation. These calls are from the community of Joaquín Carcaño and other brave trans Tar Heels who have risen to lead the movement by telling their stories. And, our representative bodies, in their unanimity, have made it clear that the people who study, live and work at this University join with these fellow Tar Heels and fundamentally reject the General Assembly's legislation as contravening basic constitutional rights of a group of people who have historically been discriminated against and as impinging, not only on individuals' rights and self-identities, but on how our 40,000-member community has chosen to define itself -- as an open, welcome and diverse community.

These decisions raise the question, so gingerly handled by UNC administrators over the past few weeks, of "Whose University is this anyways?" Even though legislators continue to fail in their most basic duties with regard to the University, such as ensuring that their graduate teaching assistants and teaching fellows receive a fair and livable wage, the General Assembly seems to operate under the assumption that their constitutional obligation to manage the system enables them to mandate policies for it without regard for the views of the people within the system. The resolutions by the University's legislative bodies point to a different truth. The University belongs to those whom it serves and those on whose work the University relies. As Charles Kuralt declared two decades ago at the University's bicentennial, this is "the University of the People." In describing this moniker, he did not turn to the capital and the legislators who approved the University's budgets. Instead, he looked to "the liberating and liberalizing air of Chapel Hill" and the people who worked in the University and fostered a specific atmosphere. He spoke of "generosity... tolerance... and a disposition toward freedom of action and of inquiry" and larger-than-life figures who worked against "ignorance, poverty, and intolerance," all concepts which HB2 violates. While the University climate still needs work, in rejecting HB2 and reclaiming our own policies in the face of state legislation, the University's representatives at all levels -- undergraduate, graduate, faculty, and staff -- partake in this tradition of what it means to be a "University of the People" and make the University our own, apart from Raleigh. The resultant chasm between the General Assembly's legislation and the University's response is profound, and clearly echoing through it can be heard a resounding cry to repeal HB2.