I lived in New York City for twenty years. I owned and ran a successful design business. I had a myriad of relationships. I went to all the best restaurants, art galleries, museums, and therapists. I schlepped to the Hamptons, and back. I relished the exciting, crazy energy. I enjoyed the absurdity of there being three cupcake stores, four banks and sixteen drugstores within a five square block radius. You just never knew who or what you might see walking down Fifth Avenue. (Like the time I saw a guy in a wheel chair, walking a turtle on a leash.) You can get a Klonopin, a condom, or cat litter delivered at any hour. But if you want sunshine in the winter, forget it.

Let's be honest - while New York has a long list of amazing things to do, see and eat, it also has a lot of drawbacks. Aside from the obvious noise, congestion, dirt, and it being expensive and mostly ugly, it also has the worst weather and it's insanely difficult to get around. It's maddening and super stressful, and if you throw a dog or a child into the mix, multiply that stress level tenfold. Luckily for me, I worked from home and got to avoid the dreaded commute, but in the winter between it getting dark at 4:30 p.m. and the chronically shitty, freezing cold depressing weather, I never went anywhere anyway. I didn't see my friends. When I complained about the cold to my grandmother she would say, "Wear a warmer jacket!" I was like: "They don't come any warmer than a fur coat!" I'm petite and I always felt like all the necessary winter gear weighed me down, literally and figuratively. I was isolated and miserable and always waiting for spring to come. It felt like self-induced house arrest. And it seemed endless. I would say to myself: "If you can just make it until March . . ." I would look in the mirror and think I was dying. I couldn't get out of bed in the morning because it was so dismal outside. The gloom was crippling. It always went away in the summer, but then like clockwork every November I was back in my psychiatrist's office forlorn and ready to try new meds. It occurred to me that I was clinically depressed three quarters of the year. I had a horrible quality of life, and so did my dogs.

In 2011, I went down to Miami for Christmas. That delicious warm breeze that hit me when I first walked out of the airport was what I imagined heroin must feel like; instant peace and relaxation. It was 78 degrees and sunny at the end of December. I stayed with a friend, who had a place on the water, and after five days I looked out at Biscayne Bay from his terrace and I thought, "Why don't I live here?" I wasn't married, didn't have kids and worked for myself. What was I going back to? To the greatest city in the world that was 12 degrees and covered with ice, so I could stare out my window and want to kill myself? But who leaves NYC?! And could I really survive in a much slower paced environment? In New York, hard work is everything, and success is paramount. Everyone wanted to know what you did. While competition is motivating and healthy, after many years in the same business I just felt like I had lost interest in the rat race. I mean did I really need to be that successful anymore? Wasn't my mental well being a tad more important? I was at the age where I no longer felt like I needed to prove anything to anyone. "But what about the culture?" people would ask. I mean, haven't I had enough culture already? I could visit culture. And besides, culture doesn't make me happy. What makes me happy is the sunshine and the ability to go outside without five extra pounds of clothing. I mean, I had survived a lot living in NY, but I couldn't survive another winter. 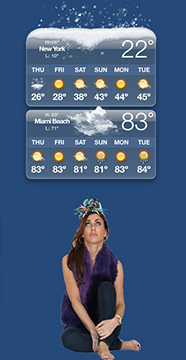 So I moved. I found a short-term rental in Miami Beach and I loved it. I didn't care that I knew almost no one. It was light out and it was warm. The Florida lifestyle is so civilized and relaxing compared to the frenetic insanity I had grown so accustomed to. It's such a relief that I don't have to protect myself from the elements anymore. I'm up early every morning, instead of not being able to get out of bed. I walk my dogs in a tank top and shorts and people are pleasant. And yes, Florida people are much nicer, and I honestly believe its simply because they're happier. Now I realize that eight out of every ten people I know in New York are miserable. But they would never dream of leaving, because it's New York, and because they don't even realize how unhappy they are. As time goes by I've slowly started to let go of the "Greatest City in the World" notion. I've been living in Florida for the past five years, and I don't miss New York at all. The good news though, is that it's not going anywhere and I am free to visit whenever I want. Never in the winter, of course.