There are two questions I get asked with an annoying regularity. They come as a pair.

The first is: "Why aren't you married?" This one I dispatch easily: I either go for the laugh, "I'm still waiting for that billionaire." Or -- if the questioner is an ass I will say: "No one ever wanted me. I guess I am just not worth being loved." My voice will catch and I will avert my eyes sadly (a la Princess Di).

Not being married and in your 50s is like having a weird stain on your clothing or food in your teeth. People want to help you -- but they don't know how. So they look away.

Not having any kids implies a problem. The subtext is: single women, married or divorced women, straight or gay women, women over 40 can have kids. So why didn't you? What's wrong with you?

We Western chicks in our 40s and 50s were given carte blanche for life. We're the first generation of women after feminism -- we got to make our own choices: work, travel, contraception, abortion, partners. We could choose not to procreate.

But did we pay a price for all that freedom?

Claudia always knew she didn't want children: "My clock never ticked. And now (at 50) when reproduction is not completely impossible but highly unlikely: I have no regrets." But she is a step mom -- so she is kind of off the hook.

I did flirt with the idea for a couple of months in the mid-1990s -- but I didn't want to give up my job. There was no way I could have lived on the road with kids along. And leaving them at home for weeks at a time just wouldn't have been fair. 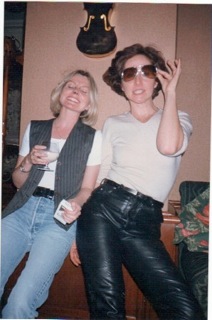 The author (right) and Carla in the mid-90s

As Claudia and I explored the issue -- we realized how many of our close girlfriends are childless (urgh -- even that word implies a lacking). And decided to discover why that was.

The replies surpassed our expectations. Who knew our friends had been sitting with all this pain and wisdom? Or, that they would be so willing to tell us about it. Not everyone was thrilled. As Simonetta (an ex-music business guru -- just turned 60) pointed out succinctly: "Asking a woman why she is childless is even ruder than asking how much money she makes."

"For me it wasn't much of a choice", said Annamaria, (52, who writes for TV and radio): "My maternal instinct never kicked in. I remember, even as a child playing with my dolls: I would pretend they were my students, not my children."

Kimberly, a writer/professor in her mid-40s, seconded that emotion: "Friends and even strangers would tell me that having children is the best thing this world has to offer, and if I didn't, I would regret it. They told me that I would never know the beauty of 'true, unconditional love'."

"I would say in all honesty I had no maternal instincts until I hit 40," admitted Carla (49/ex rock-chick and now property flipper). "Which didn't give me much time. But I look back now and see my life was pretty selfish, and in some ways, I was very immature, certainly about relationships."

"(For me) it boils down to one thing: I don't have the energy..." wrote Kimberly. "I would rather focus on my career and my husband. I feel my choices may be considered selfish, but they are also selfless. I know I will never hold my own sweet child, but I just don't think I could 'do it all'."

Mercia (a marketing exec, just turned 41) felt the same: "I understood very early on that my personality would not have allowed me to be a working mother. The guilt and pressures of doing both (jobs) well would've driven me crazy. I made the conscious decision to be financially independent and have a career."

Carla: "I met someone six months after my 40th birthday and spent a year in Australia with him. My relationships have never segued into one another. I spent many years as a single woman and I remember, vividly, sitting on the plane home -- coming to terms with the fact that I probably faced spending years on my own again. And along with the loss of the relationship -- went my last chance to have a child."

Mercia's marriage "was not in a good place from the start. I was determined to not have children until we could sort out our problems. We never did. We got divorced. And I am very grateful that I did not have children."

There was also an element of bad timing, which Carla laid out candidly. "It came down to: wrong man/right time, right man/wrong time," she wrote. "I have just married for the first time at the age of 49. My husband is 47 and has one daughter. There is no doubt for either of us that, had we been younger, we would have tried to have a child together."

We read sadder notes too. For some friends -- their choice was informed by loss.

A Spanish friend told of a miscarriage late in her second trimester. It was an event so devastating she never tried for a baby again. "The blood and the pain and that little body that I saw were too much for me," she said. "After that, for me, it just wasn't possible anymore".

Fabienne had terminated a pregnancy when an amniocentesis revealed her baby had Down syndrome. "I know what people say -- that Down babies are loving and non-judgemental and sweet, but what if I hadn't been able to love him? What if I couldn't bear to be with him -- how would that have turned out?" She never took that chance again.

And for others -- being childless wasn't a choice; it was the end of a dream.

"If you don't mind -- I don't want to be part in this" wrote one friend. I heard the echo of sadness and understood. For her something she had hoped and wished for had never come to pass.

L was more direct: "You know the answer to that Sue -- I couldn't find anyone who wanted to marry me let alone have kids with me. And I didn't want to do it on my own."

I won't be quite so flip next time someone asks me "Why not married, why no kids?" These questions go to the heart of femininity, to the core of being a woman. The answers define us -- both in other people's eyes and our own.

Perhaps we owe it to all the women before and after us to look the questioner in the eye and say instead: "you know, that's a complicated one, and I would like to do your question justice. How long have you got?"

PHOTO GALLERY
Things I Know About Women Now That I&#039;m Post50
Download
Calling all HuffPost superfans!
Sign up for membership to become a founding member and help shape HuffPost's next chapter
Join HuffPost

Childless And Middle-Aged: What's Wrong With You?
Things I Know About Women Now That I&#039;m Post50