Woody Allen has released a movie every year since 1982 (and 45 films total during his highly lauded career), but his latest feature, "To Rome With Love," might have the highest pre-release expectations of them all. It follows last summer's "Midnight in Paris," Allen's most financially successful offering yet. Is the director worried about living up to that success?

"To me, I try to make a good picture each time," Allen said during a press conference in New York on Tuesday. "Either I make it or I don't make it. ['Midnight in Paris'] was a happy accident."

The romantic comedy grossed just over $151 million around the globe, and earned Allen his third Best Original Screenplay Academy Award, and fourth Oscar overall. (He didn't attend the ceremony to accept the trophy, as is his custom.)

"I have no idea why everyone embraced the picture so enthusiastically," he said. "You make a movie and some pictures they like a little bit, some they like a lot, some they don't like at all. It's very capricious for the filmmaker.

"To me, it's no more appealing than 'Vicky Cristina Barcelona' or 'Match Point' or 'Annie Hall' or 'Husbands and Wives.' To me, they all have the same appeal," Allen said before quickly adding, "or lack of appeal."

"I've always liked to act," Allen said about his return to the screen. "When I write a script, I look at it and if there's a part that I can play, then I play it. In the last half-dozen scripts that I've written, there hasn't been anything I felt I could do. This script, I looked at it and thought I could do it."

Allen plays a retired American music producer in "To Rome With Love," who tries to get his daughter's fiance's father (played by singer Fabio Armiliato) to use his operatic singing voice for financial gain. He's also set to co-star in John Turturro's "Fading Gigolo," but -- as he noted during the press conference -- not as the titular gigolo.

The cast members at the press conference included Baldwin, Cruz, Gerwig, Page and Italian actress Alessandra Mastronardi, all of whom heaped praise upon the director, and not just for his acting prowess.

"With Woody Allen, you have someone who is responsible for more memorable moments, on every level -- writing, producing, directing, acting -- than any other person that has ever lived in film," Baldwin told the assembled press. "Even Woody Allen's less-successful efforts are better than most other films you see. When you see the greatest films he's made, they're some of the greatest films ever made. When he calls you and asks you to do this with him, you go. He's on an island on his own in terms of filmmaking."

While Allen runs a tight ship on set, the director said he's often lost when the editing process begins.

"You start off with very great ambitions," Allen said. "You want to make 'Citizen Kane.' Then when you get in the editing room you realize that you screwed up so irredeemably that you'll edit the film in any configuration to avoid embarrassment. You put the beginning at the end, you take the middle out, you change things. The editing process becomes the floundering of a drowning man. That's been it for me from the start of my career."

Fortunately, "To Rome With Love," with its four disconnected stories linked by the common setting of Rome, is the type of film that allowed Allen to play around with narrative structure.

"I couldn't settle on one story. 'It's a funny story about a guy who could only sing in the shower. No, it's funnier if a guy wakes up and is suddenly famous and doesn't know why.' Then I thought, 'Why not just do them all in a cavalcade of stories? Just put them out there and the audience will follow.' I was confident they would follow them," he said. "I don't think they're too difficult to follow. I edited them logically, so when you left one story, you weren't disappointed coming into a new one."

Ultimately, that's for audiences to decide, but it's hard to argue with the strong work -- and harsh criticism of the media -- Allen offers in the section of the film devoted to the character played by Benigni (acting for the first time since 2005), an Italian businessman who unwittingly -- and literally -- becomes an overnight celebrity. In the film, Benigni fields questions as inane as his breakfast preferences (bread, toasted), perhaps Allen's biting parody of press swarms such as Tuesday's event.

Asked what were some of the dumbest questions he has ever gotten, Allen replied with a chuckle, "I don't think we have enough time."

"When I walk through those red-carpet things. The amount of times that I have been asked, 'Is Scarlett Johansson your new muse? Is Penelope Cruz your new muse?' Those questions are silly. If I make one picture with somebody they assume that I have a muse, that I want a muse, that that person wants to be my muse. That's one of the millions of questions that are really, really stupid."

PHOTO GALLERY
To Rome With Love Premiere
Download
Calling all HuffPost superfans!
Sign up for membership to become a founding member and help shape HuffPost's next chapter
Join HuffPost 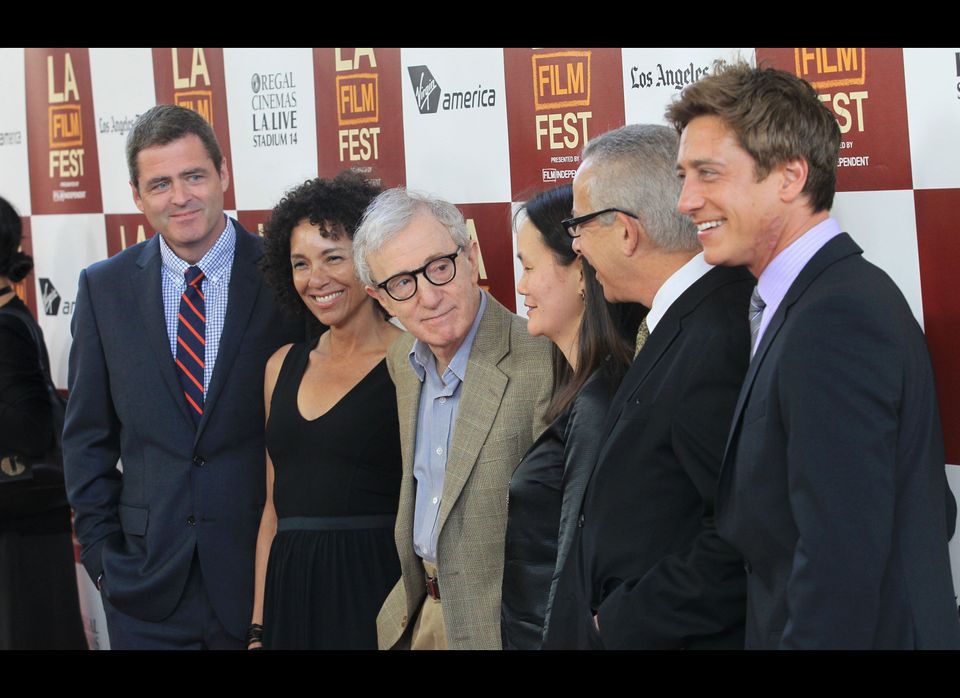