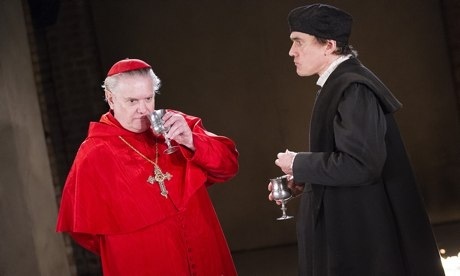 After seeing Wolf Hall (Parts 1 & 2) I've learned that other than beheadings and the advent of social media, scandals involving the British royal family have not changed much since the 1500's, when King Henry VIII was wedded to six different women between the years 1509 and 1547. Part I begins during Henry's marriage to Katherine of Aragon, -- his first -- who is unable to deliver him a male heir, so the King instructs Cardinal Wolsey to arrange a divorce from Katherine, which is forbidden by the Church. When Wolsey (Archbishop of York) fails he quickly falls out of favor with the king, and this makes way for Thomas Cromwell, Wolsey's right hand.

While the story may revolve around the problems faced by the King (portrayed with great exuberance by Nathaniel Parker) the show belongs to Cardinal Wolsey and Thomas Cromwell, played respectively by Paul Jesson and Ben Miles. The political machinations orchestrated by Cromwell involved everything from importing grain from France to engineering the downfall of reigning queens and they are all handled with a level of aplomb that should make today's politicians envious.

A Wolf Hall mini-series recently premiered on PBS featuring some of the world's finest actors, but the play offers something the television series is lacking -- consistent humor and wit. "The King doesn't give bad news, he delegates it to me." "She's a very gracious lady if everything goes her way." "I've been thinking about purgatory. I know we used to have it, but do we have it still?"

I spoke with Paul Jesson, who plays Cardinal Wolsey and told him how the play had wowed me unexpectedly. "People have called this is more than a play," said Jesson. "It's a historical pageant -- a chronicle if you will, because it follows historical facts, even though it's from Hillary Mantel's particular viewpoint." Although it's not mentioned in the play, Wolsey and Cromwell worked together for 15 years, but Jesson and Ben Miles convey the relationship so perfectly it's completely understood. "Wolsey was a man who was very able and industrious and he saw the same in Cromwell," said Jesson. I also mentioned to Mr. Jesson how much I enjoyed the play's humor, and he told me that he's performed the play in England and America and the New York audiences have laughed the most.

I found every aspect of the play compelling. The costumes are beautiful and the simple stark set helps all the more to feature the story and characters, portrayed by a remarkable ensemble of nearly two dozen actors. Pierro Niel-Mee plays Cromwell's servant Christophe, and steals nearly every scene in which he appears. Wolf Hall is a unique theatrical experience rarely found on Broadway and should not be missed.