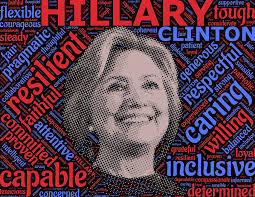 My husband was worried about me as the returns came in. "Why are you so damn calm? She's losing in some important states and you seem fine. It's scary."

"Because she's going to win. I know it."

I knew it the day she announced her run.

I knew it because despite well-funded, anti-Clinton machines that told us a million times across dozens of media outlets why we shouldn't the trust facts, I counted on enough people to dig through the lies and add up the truth.

I knew past any red hot issue, jobs, immigration, that voter conscience would shove aside party, fear and Hillary-hate. America has self-respect. We know when enough is enough.

Voters felt long before they ever decided, that can't be our President.

When Trump appeared millions of angry voters said this guy will turn the establishment on its cozy head, shake hard and man, oh, man, my life will be better than it is now.

Soon shocking numbers of people habituated to Trump's horrible and pretended the vile he said never happened or was taken out of context or he "didn't mean it."

But I knew a tipping point of undecided and Republican voters would eventually say, "You're not a good enough person to be my President. My kids are watching for God's sake."

And the fact is most voter voters did, because Hillary won the popular vote.

So when I hear "the people have spoken," I think yes they have, but the electoral process told them to shut the hell up.

At about 3:30 am on election night, I moved out of denial and into the bargaining stage of grief. I sat on my bathroom floor and pleaded "Please, pleeease, God, no. Do you know what this means? My daughter just voted for the first time."

About 4am, my husband came into the family room and saw me still watching the election returns and sobbing on the couch. Blurry after too much wine, shock and despair, I almost couldn't get the words out, "This can't be happening."

The last stage of grappling with grief is acceptance. Acceptance is the place where you don't agree with the outcome but you make peace so you stop feeling so shitty.

But I'll never accept that *61,336,159 Americans decided racism, sexism and misogyny weren't deal-breakers. I shouldn't have to explain why in 2016.

Now all I can do is ask what's next? What do we do? Where do we start?

My suggestion is to start by not making things worse.

1. Remember why you love your friends and family. People you loved on Monday, November 7th are still those people. Your cousin Frank is still smart, a damn good storyteller and funny. Your best friend Lisa is still warm, a beautiful friend and generous. Good doesn't disappear overnight. Forget their politics. Separate them, from him.

2. Stop mentally dividing people into Hillary vs. Trump.This election viciously divided our nation into two mutually exclusive people piles. Now all we feel about our Trump friends is shock, disappointment and anger. Now we see our Trump neighbor as one word, Trump, and the antithesis to all we hold sacred. Now we wonder if the guy at the gas station or gym is one of them. Our deep tribal division is sad, dangerous and regressive.

We think we know everything we need to know about Trump supporters from disgusting chants by pockets of devolved people. We don't. Trump pulled votes from almost every demographic, including a disappointing number of women. I heard a man tell Michael Moore, Prince of the Progressives, that he voted for Obama, loved Michael's movies, but that Trump was his guy. This election isn't about good people vs. bad. Trump won for a long list of complex reasons that have nothing to do (for plenty of voters) with the hate that came out of his mouth.

3. Don't knee-jerk piss people off or excommunicate anyone. If your anger is in danger of glaring at some poor unsuspecting Trump tee-shirt-wearing guy minding his own business, by all that is right in the world, stop yourself. Look away or give him the half smile you'd give any stranger in your path.

But if the Trump tee-shirt-wearing guy says something stupid when he sees the safety pin on your collar, breathe, then walk away. Yeah, go high. You'll wonder how the hell you did it.

Don't unfriend or boycott anyone unless he or she insists on being an a-hole. Sometimes you have no choice but to shield yourself from toxic people or nice people who won't back off. If you hate your friend's political rants on Facebook ignore her posts or hide her feed. If someone brings up the election, tell her "I love you but let's not go there." If she goes there, say it again and shut down the conversation. There's thousands of other topics in the universe. Kids. Football. Dogs. Career. Dating. Movies. Books. Food. Travel. Her cool boots. Anything that won't divide you into two angry piles.

4. Learn to actively listen. Okay for some masochistic reason you want to confront the roaring stomping elephant in the room with friends and family. Your anger is who you are right now and you want people to understand why you can't just "get over it."

Fine, but set the stage to learn something from a Trump supporter. Ask friends and family to explain without bashing Hillary, why they chose Trump. Then explain without bashing Trump, why you chose Hillary. Stay off the controversial and personal. Focus on issues. Let them speak without interrupting. Don't debate. Debate time is over. You might want to slam your head against the wall or you might learn something. This act of bravery will be damn near impossible which is why I don't suggest you try it right now. Emotions are too high.

Post-election town halls are cropping up all over the nation so a better idea is to vent your anger in a moderated setting instead of railing against your loved ones. Your precious relationships matter far more than this election.

5. Focus on your election wins. I lost a lot this election, so much that if I focus on the meaning and impact, I'll go fetal and become a useless citizen. So I'm trying to focus on some state and local wins. Florida Congresswoman Stephanie Murphy beat John Mica. Mica wasn't my choice for Congress but he has an impressive record on mass transportation. Tapped for a possible Whitehouse position, maybe he'll keep Florida's transportation needs on the front burner. Medical pot finally won in Florida and a solar amendment designed by the utility companies to confuse consumers lost. My town of Orlando picked Hillary. It's only a symbolic win, but I'll take it.

6. Get off the election grid. If you're a seething mass of negative, go under for a while. Turn off all news. Get off Facebook and Twitter. Go the movies. Watch sitcoms. Head to the pet store and pet puppies. I promise you, puppies help. Personally I don't have the willpower to get off the grid, but you might. Get away from the slow drip-drip-drip of 16 months of soul-sucking election stress. It's hurting you more than you think. And for a while, you might pretend the impossible never happened.

And when you're ready to come out from under the madness, depression and anger, activate.