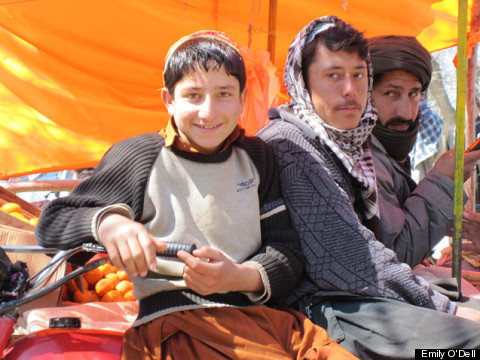 I can't get their faces out of my mind. When I read about bomb blasts and drone strikes in Afghanistan and Pakistan, these are the faces I see. Maybe I'm haunted by the smiles and tears of the children I met and photographed in Afghanistan because I haven't yet shared them. So let me introduce you to some of my small friends, whose entire lives have been marked by America's longest and least talked about war. 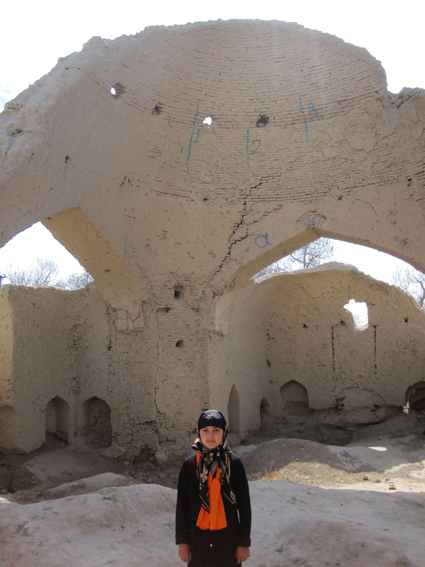 "My name is Butterfly," she said.

When she saw me taking pictures, she asked for a portrait of her own. She had come to this mud-brick dwelling -- thought by Afghans to be the medieval home of Rumi's father -- because Rumi, the revered 13-century Sufi, is her favorite poet in school. As she began to recite long passages of his Persian poetry by heart, she put my years of Persian study to shame. When I quizzed her about Rumi's life -- she knew every date, every detail. Now, every time I read Rumi in Beirut, I think about this devoted, young Rumi scholar, standing in the middle of a war zone, singing poems of peace. 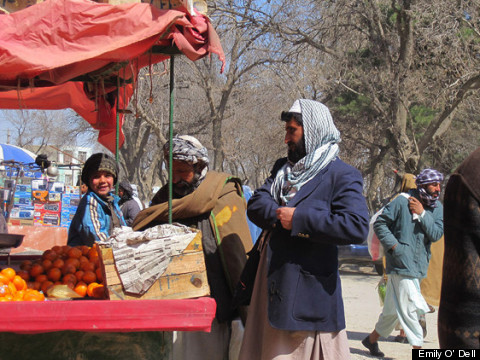 This kid cracked me up. He sells oranges in the marketplace, and you can tell from his charming smile that he's quite the businessman. He has to sit in the cart with the oranges, because if he stood next to it -- he wouldn't be able reach them. All over Afghanistan, I saw small children like him hustling on the job, instead of studying in school -- more than happy to take a few moments from work to pose for a picture. 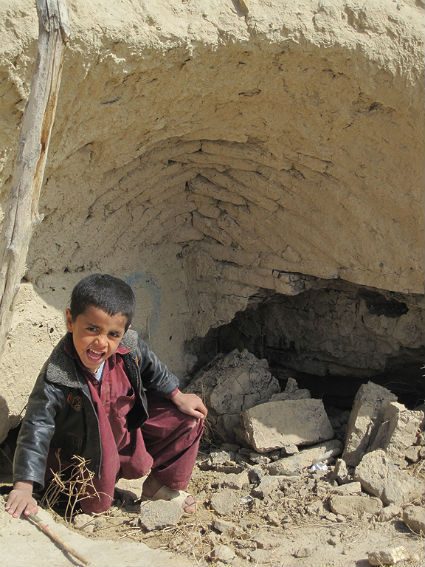 "Come on, hurry up, get inside," this little rascal said to me, as his friends counted down for a game of hide-and-go-seek. Even though the war is still going strong, it hasn't stopped kids, like him, from playing. 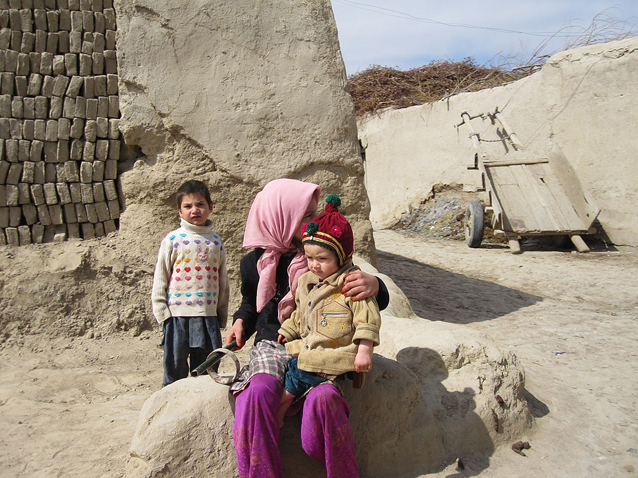 In America, we have helicopter parents, but in Afghanistan, it's the actual helicopters -- not the parents -- that do the tracking. In each village I visited, children were roaming the streets on their own -- without an adult in sight -- while looking after the little ones. In her left hand, I noticed the girl in the pink scarf was holding her sibling, but in her right hand -- she was shaking a makeshift toy and still playing. 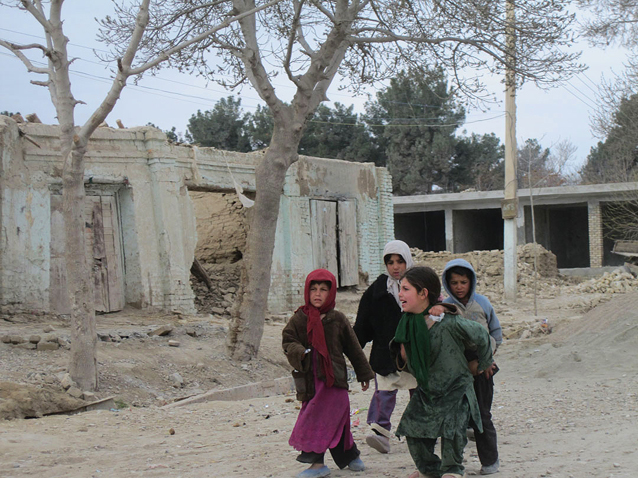 And then there was the girl in green who wouldn't stop crying, as she broke away from her friends, gripping her sibling on her back. When I saw her in hysterics and heard her heart-breaking sobs, I thought of all the tears shed this past decade by the children of Afghanistan in this never-ending war. 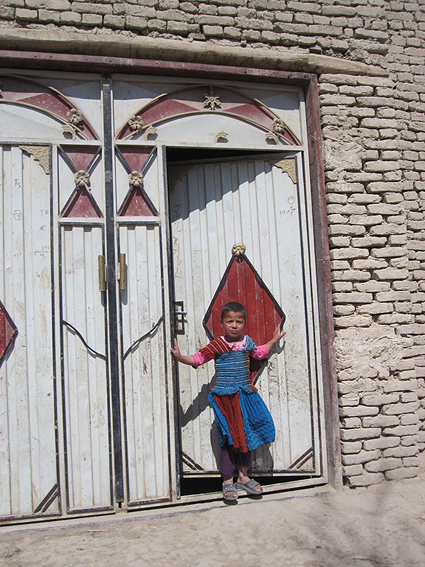 When she stepped out of the door and froze in this pose -- her head shaved to prevent against lice, and her outfit matching the house -- it was like the photo had been planned before I even arrived. 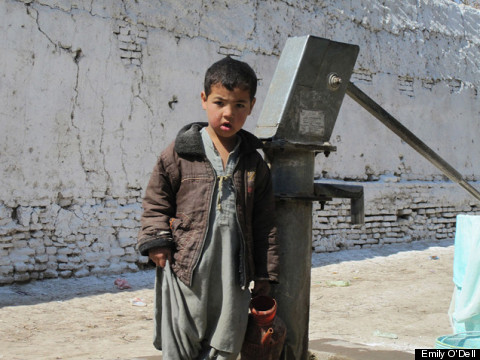 This kid was totally lost -- alone at the pump on a household errand. No matter how much we tried to help him or encourage a smile, his gaze remained glazed. Today I wonder: will children like him -- like my friends in Beirut who grew up during the war -- suffer the symptoms of PTSD as adults? After all, soldiers aren't the only ones haunted by trauma for the rest of their lives -- children of war are too. 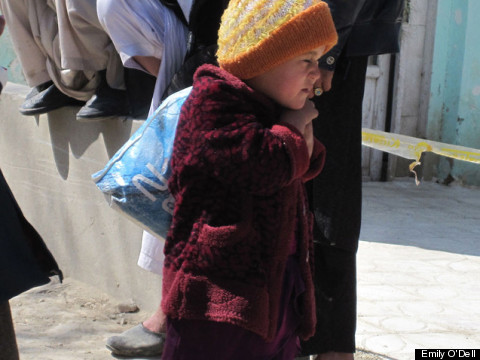 When I saw this toddler -- trudging all alone past a crowd of old men, and carrying what seemed like the weight of the world in that blue bag -- this image struck me as the perfect symbol for all the children in Afghanistan -- shouldering not only the difficulties of the present, but also the heavy demands of an unknowable future. 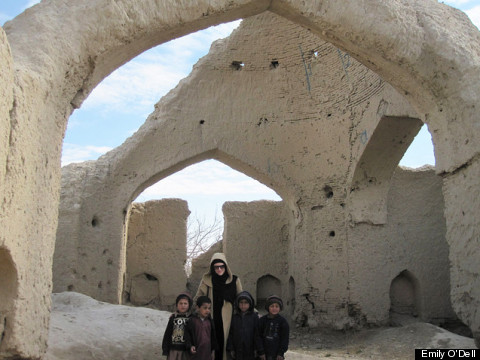 "ALWAYS POSITIVELY LOVE EACH OTHER," is the message written on the shirt of one of these little rascals -- who I stumbled upon at Rumi's father's house. Like them, Rumi was a child of war too, forced to flee west when the Mongols invaded. Anytime I mentioned Rumi's name to them, this little gang would interject: "Rumi al Balkhi!" Translation: "Rumi, the one from Balkh"--the region where they live too. 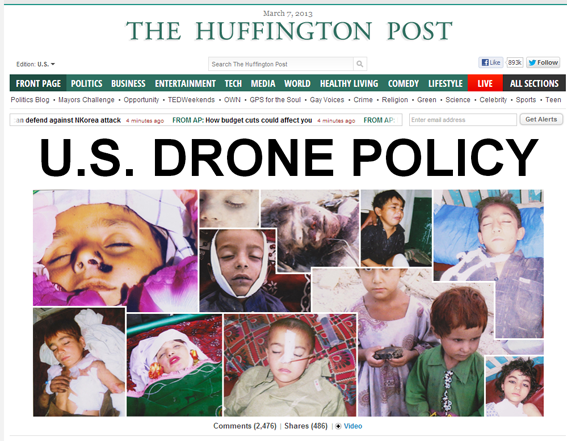 I really can't get the faces of these living and dead children out of my mind -- and I hope I never do.