What's more, many of these states are undergoing rapid population changes with Latino registered voters growing by 438 percent in Georgia and 575 percent in Kansas from the 2000 to 2012 presidential election, according to Census statistics. So these are states where we should continue to paying attention to the Latino vote in future statewide contests. We are not saying that Latinos will singly decide the 2014 Senate election across all six of these states, but rather that these states should be on your radar screen on November 4. 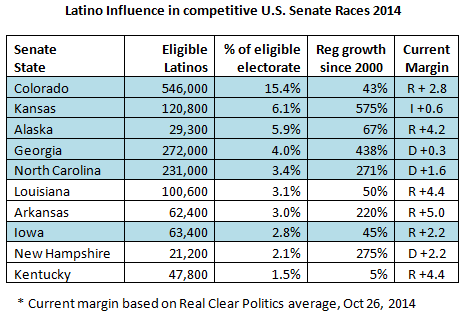 However, voters are heading to the polls to elect more than U.S. Senators in 2014. There is a long list of competitive gubernatorial elections that will decide control of the governor's mansion in about a dozen states and the Latino population is large and growing across these states as well. Looking at competitive elections for governor, there are 12 states where the share of Latino eligible voters is larger than the current polling margin between the two candidates. Some of these competitive states like Arizona and Rhode Island are now moving more towards the "leaning" column, but still have very large Latino electorates.

But other states like Florida, Colorado, Connecticut and Illinois all have margins of 1 percent or less and Latino voting populations of 10 percent or more. Other states like Georgia and Kansas which small but growing Latino populations have competitive races for both Senate and governor that could all be decided by less than 1 percent. Even the state of Wisconsin which is currently rated as a tie in the polls has a 3.3 percent Latino eligible electorate and has had 124 percent growth in Latino registered voters from 2000 to 2012. 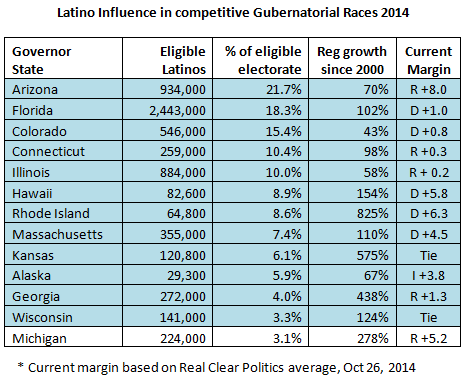 Whether or not Latinos are part of the coalition that cast the deciding votes will depend largely on voter enthusiasm and voter turnout. In 2012 a record number of Latinos voted driven by strong enthusiasm for Obama's executive order protecting DREAMers (DACA), combined with a robust Latino-focused get-out-the-vote effort by OFA, and uncoordinated, but equally strong efforts by national Latino civic groups dedicated to growing the Latino electorate. In 2014 Latinos could be the decisive vote in many of these 18 statewide races for Senate and governor, but only if the campaigns activate, inspire and mobilize Latino voters. If that happens, we'll all be talking about more than just Colorado on Wednesday November 5th.

Where the Latino vote is growing

These dramatic trends are being driven by immigration flows 25 years ago in which many immigrants are now finally eligible and pursing naturalization and entering the electorate. Further, the number of U.S.-born Latinos turning 18 and entering the electorate is increasing by the month. According to the National Council of La Raza, on average 70,000 U.S. born Latino citizens will turn 18 every single month and are eligible to vote. As these trends continue more and more states will enter the domain of Latino influence in elections for governor, U.S. Senate and president.

Matt A. Barreto is co-founder of the polling and research firm Latino Decisions. Barreto is Professor of Political Science at the University of Washington and co-author (with Segura) of the just published book, Latino America: How America's Dynamic Population is Poised to Transform the Politics of the Nation. 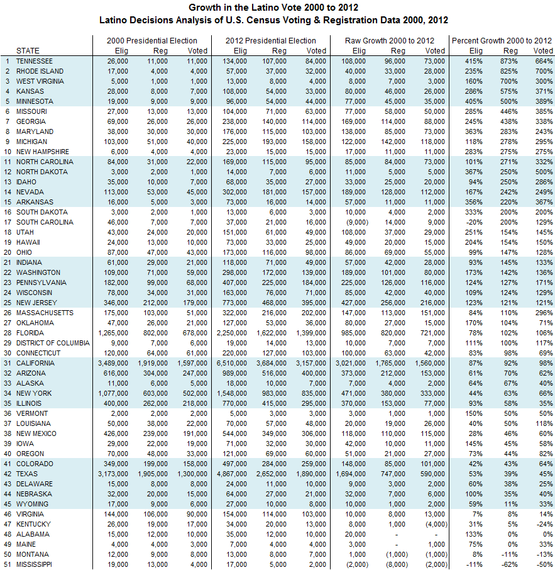