In the great state of Alaska, north of the Arctic Circle, there is a place where you can be dropped off by bush plane and stand amidst one of Earth's last true wilderness places. There are no signs of humanity in your perimeter; there is nothing other than wide open space stretching far into the distance. There are no man-made trails, only game trails, winding through spruce and birch forests that hug the foothills of the mountains and serve as a habitat for wildlife. Beneath your feet is soft Arctic sand decorated by grizzly bear tracks; the dunes, a relic of the last Ice Age. Catching your eye on the horizon is the Kobuk River, softly glinting whenever sunlight lands upon it. It is without measure one of the most pristine areas on the planet; it is Kobuk Valley, America's least visited national park.

Because Kobuk is so completely unique and because it is realistically a place that few travelers will ever journey to, we wanted to paint a picture of it by breaking down what we think are some of the most notable features in the area--so you can virtually travel there right here. We've also included some info on how to go about getting there and some simple safety measures if you are adding Kobuk to your real-life travel itinerary. Onward! 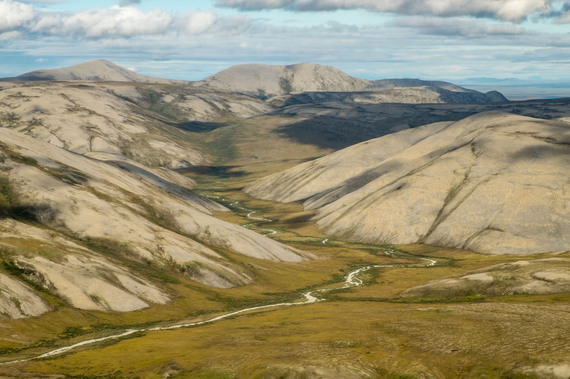 Arctic Sand Dunes: There are a few national parks in America where sand dunes can be found: Guadalupe Mountains in Texas; Death Valley in California/Nevada; Great Sand Dunes in Colorado, and probably others that we've seen but are failing to mention here. Kobuk Valley is the only park where you can find Arctic sand dunes that, as the National Park Service puts it, "look more at home in the Sahara than 35 miles above the Arctic Circle."

The dunes were formed over tens of thousands of years with the rise and retreat of glaciers in the high mountains that surround the Kobuk Valley. Over such a long stretch of time, the activity forced the rocks into fine grains of sand that layered itself into large piles around the bases of the mountains forming the dunes we see today. It is an environment that is full of life with sprouting grasses, wildflowers, sedges, and wild rye rising from the sands; with scatterings of geological remnants including schist and jade (which there are large deposits of in the east area of the park.)

There are three dune fields in the park: the Great Kobuk Sand Dunes, Little Kobuk Sand Dunes, and the Hunt River Dunes. The Great Kobuk Dunes in the eastern area of the park are the most accessible, rising 100-feet high from the ground and stretching 25-square miles, rolling in beautiful formations across the landscape--its a marvelous place to hike, play, and photograph. If you can arrange it, your bush pilot can let you off right on top of them, and the in-flight is mesmerizing. 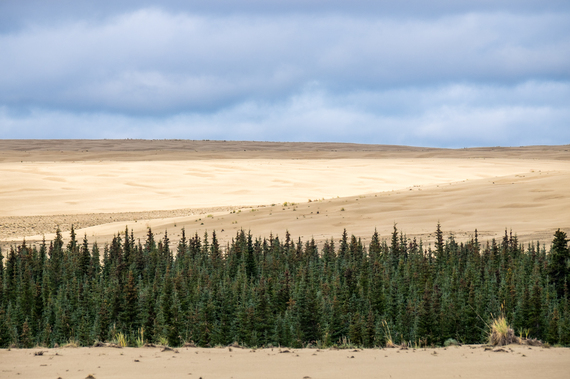 The most active Arctic sand dunes on the planet can be found at Kobuk Valley National Park in Alaska. Photo credit: Jonathan Irish 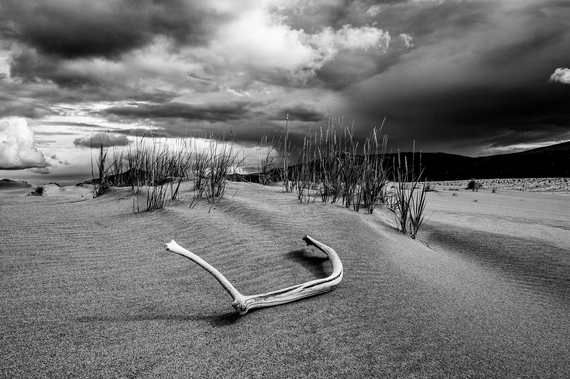 Even if you don't see the caribou migration or any wildlife at all, their presence is represented throughout the park. Here, a caribou antler in black and white. Photo credit: Jonathan Irish

Caribou migration: Kobuk Valley National Park is home to the largest herd of wildlife in Alaska. Holding at a population of around half a million strong, the nomadic Western Arctic Caribou travels through the park during migration each fall from their northern calving grounds to their southern wintering areas. In late September, you can see their hoof prints stretching across the dunes; year round from a bush plane, you can see their trails tracking through the tundra that have created a permanent effect of erosion from the trampling of vegetation. You maybe never see them, but their presence is always represented... caribou have sustained native Inupiat people in the area for millennia.

Wildlife: Wildlife is ever-present in the park even if you never see one species. Even the birds are elusive, darting between trees faster than you can raise your binocs. Animal tracks stretch across the dunes. Games trails of all sizes traverse the landscape providing passageways for black and grizzly bears, wolves, moose, porcupines, and foxes to travel to and fro. Raptors fly overhead and salmon swim in the Kobuk River. Fauna is everywhere, just quiet yourself and let the wilderness open up to you.

Native Alaskan history: Kobuk may be the least touristed national park, but in the areas surrounding the Kobuk River live hundreds of native Inupiat people in small villages who still conduct a subsistence lifestyle the way their ancestors have for 10,000 years. In the extreme conditions, they get around on snow mobiles (which in Alaska they call "snow-machines") and rely on hunting (bear and caribou) and fishing (salmon) to sustain their communities. The Kobuk National Park management plan aims to protect traditional native practices of subsistence living ahead of tourism opportunities, and as such, no facilities or trails lie within the park boundaries leaving us a remarkably uncluttered place to explore.

One-of-a-kind scenery: To stand atop the Great Kobuk Sand Dunes and spin a 360, you would have no idea where you were--sand dunes, tundra, forest, rivers, mountains, and big sky don't generally sit altogether in one place. The confluence is in a transition zone between boreal forest and treeless Arctic tundra, giving way to densely blanketed tundra leading off into the Waring and Baird mountains. In the forests you will find organisms such as algae, fungi, mosses, and lichen. The Salmon River, like the Noatak River in Gates of the Arctic, has a wild designation given by the National Wild and Scenic River System; and a 60-mile stretch of the Kobuk River also runs through the park. And rising amidst it all are immaculate dunes... in the Arctic north--it's totally surreal. Kobuk has a sense of place that makes you feel a little bit as though you are wandering inside of a landscape painting or in a storybook tale, and you can get there from Anchorage or Fairbanks in just a few hours. 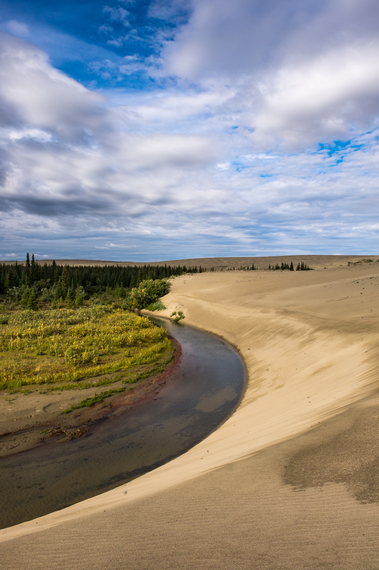 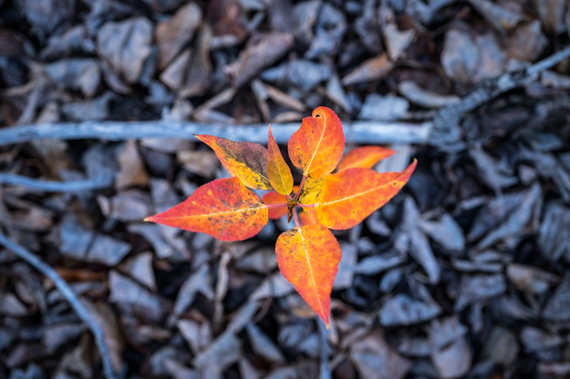 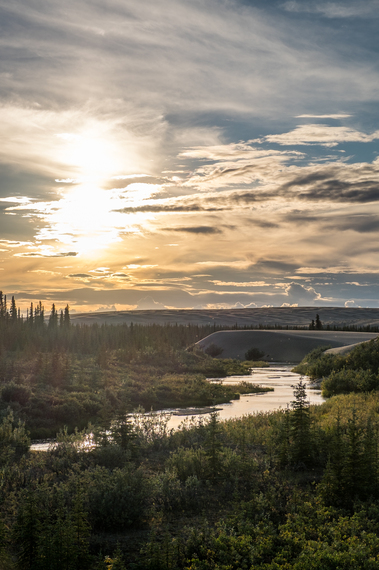 Extreme solitude: Touching down atop the Arctic dunes in Kobuk was the first time in recent memory that any of us could recall being completely alone outside, without the possibility of someone other than a moose, a bear, a wolf, or a bird, watching us. When you are alone in that way, it is a very strange feeling... it's absolutely wonderful. Depending on how and when you travel in Kobuk, you might come across native Inupiat peoples from nearby villages hunting or fishing in the park--particularly so during the annual autumn caribou migration--but such a run-in is unlikely in a wilderness that is so vast. It is highly unlikely that you will see other travelers either, though you may see a bush plane fly overhead from time to time. Looking to really get away from it all? This is the place. 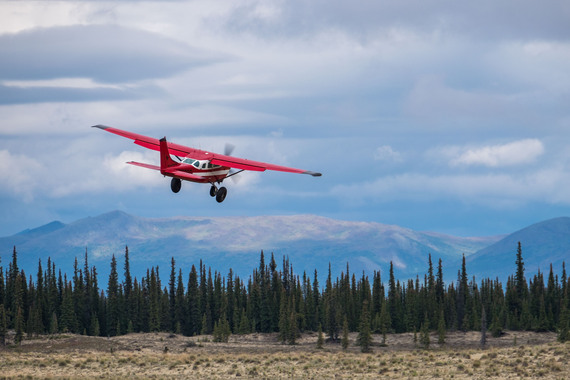 Our bush plane with tundra tires takes off, leaving us with the solitude of Kobuk Valley National Park in Alaska. Photo credit: Stefanie Payne 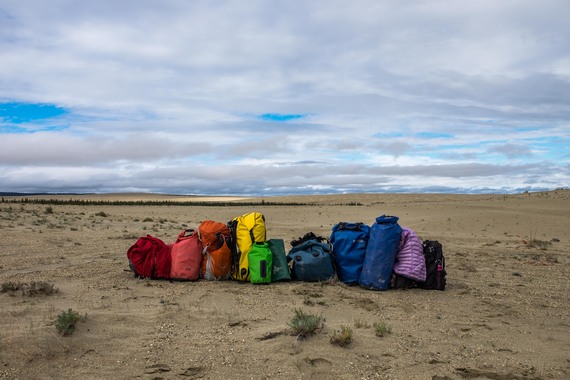 Left with our gear in the Arctic Alaskan wilderness... we got creative right away. Photo credit: Stefanie Payne

How to explore the park: Kobuk is the least visited park for a reason--it's a challenge to both get to and to navigate, and it would be ill-advised to do so without hands-on guidance from those who know the region, climate, and way of life in Alaska. Such assistance doesn't come cheap, either. Alaska is notoriously expensive, and getting to Kobuk is particularly so as there are only a few outfits that know the area and operate there.

Here's a breakdown of ways to explore Kobuk:

Some visitors mark this one off of their national park bucket list by scheduling a bush flight from the nearby access point of Bettles for a visual tour of the park, while setting foot down only for an afternoon stroll and a picnic on the dunes. This flightseeing experience is the easiest way to get "into" Kobuk. Those up for a bigger challenge arrange their own bush flights and go backpacking inside of the park. There are several lodges scattered around the Kobuk wilderness that provide access and guidance. For those (like us) wanting to see as much as the park as possible in a short amount of time, there are a select number of guided adventures that provide immersive experiences. Ours was with Alaska Alpine Adventures, the leading adventure travel operator in many of the wildest places in Alaska. (Below are some photos of our traveling posse doing what people do in the wild...) 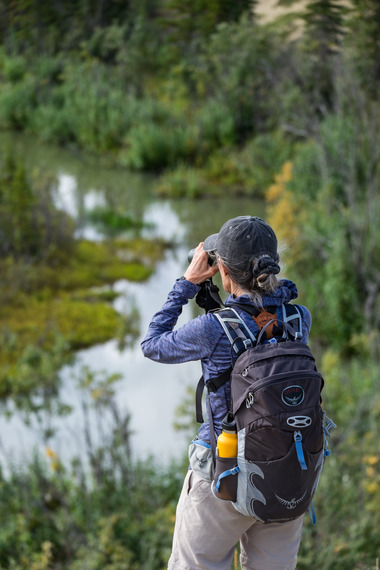 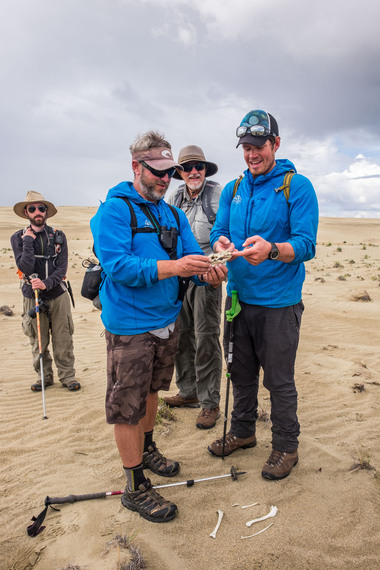 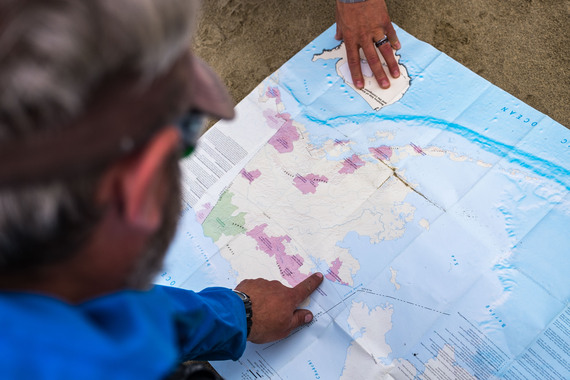 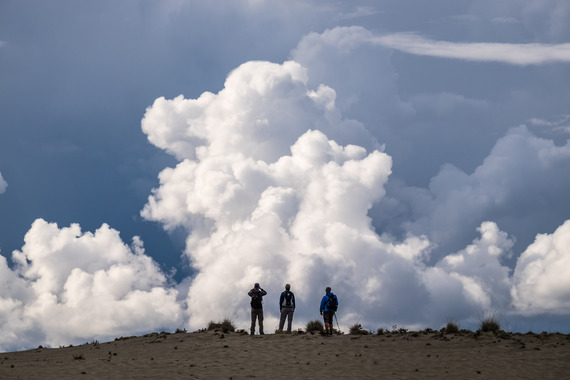 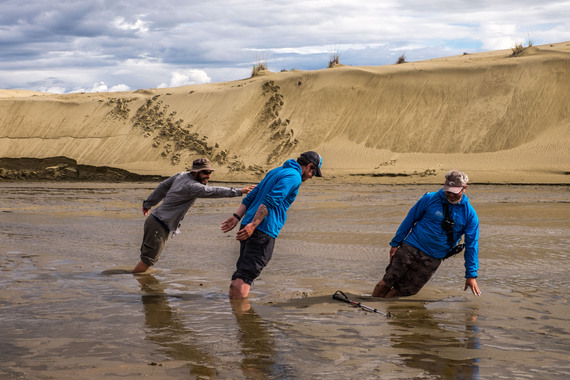 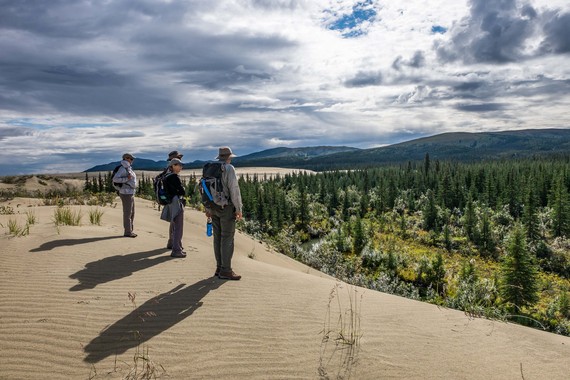 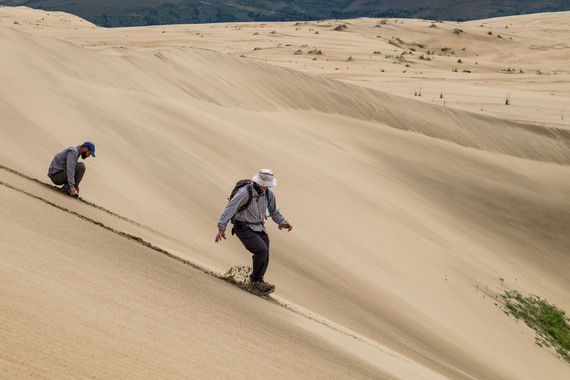 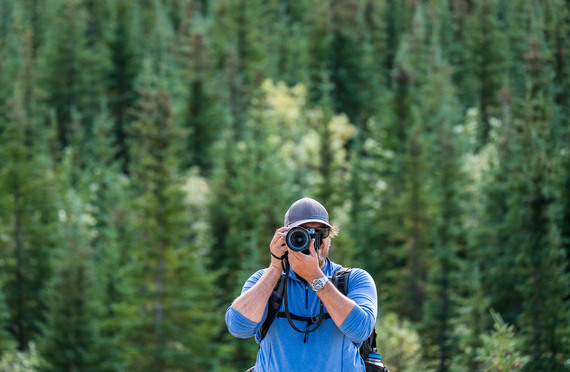 Getting there: Commercial flights run daily from Anchorage to Kotzebue, where the park's information center is located and from where you will jump off from to get into Kobuk. Kotzebue is the nearest full service town (a fishing village with a population of approximately 3,000) to the park. The National Park Service provides a resource guide to air taxi companies operating in the area on the official park website.

A note about safety and smart travel: Like Gates of the Arctic, Kobuk is so remote that help is days away if you need it and as such, you should either travel with a guide outfit or have rock solid survival skills. Either way, you must have a plan. Even armed with outdoor skills--lack of communication, a very remote location, and unpredictable weather can leave travelers stranded for days. Planning for that kind of situation is vital. It is also important if on your own to keep with you a compass and topographic map as the dunes are a disorienting place to wander and it is easy to lose your way. And don't forget a filter/iodine pills to treat your water. Leave an itinerary with loved ones... Those are just a few of the precautions to take entering the Kobuk wilderness. As always in all of our national parks, your safety is your own responsibility and yours alone.