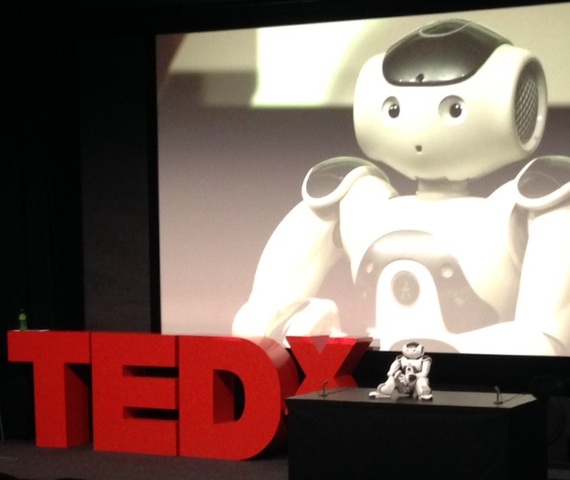 I recently had the opportunity to be the closing speaker at the 5th annual TEDxTransmedia event, held in the iconic Radio Television Suisee building in Geneva, Switzerland. Organized by media pioneer Nicoletta Iacobacci, the event was opened by a two-foot tall robot that gave a short welcome speech. The theme of the event was exponential beauty, and over a dozen speakers, performers, and young change makers also made presentations. The event was an overwhelming success that was topped off by a festive farewell cocktail reception.

Below is a condensed version of the first part of my speech, which touches on various ideas of beauty and is dedicated to the field of life extension science. My talk was titled: The Beauty of Being Alive:

In the last few hours you have heard many incredible speeches about beauty. You have heard many definitions, many interpretations, and many ideas about it. The experiences we have of beauty seem endless. For some, it's a spectacular sunrise over the snow covered Alps. For others beauty is simply being kind to strangers. For some, beauty is racing a sports car down an empty country road.

For a number of years, I worked regularly as a journalist for the National Geographic Channel. Some of my reporting put me in danger, such as when I tracked illegal loggers in Paraguay, volcano boarded in Vanuatu, or chased wildlife poachers in Cambodia. Some of my assignments were even in war zones, like the ongoing conflict in Pakistan and Indian Kashmir.

However, it was in the jungles of Vietnam that I faced my most dangerous assignment. During the Vietnam War, America dropped millions of bombs on Vietnam. Approximately 5 to 15 percent of those bombs never exploded. Many farmers in Vietnam grow rice and earn only a few dollars a day. Yet the salvaged metal from one large unexploded bomb can equal almost a year's worth of rice farming. Not surprisingly, thousands of farmers have given up their agriculture ways to search for unexploded bombs in the jungles, creating the strange profession of bomb hunters.

The problem with this line of work is twofold. Parts of the country are filled with landmines, and dismantling armed bombs can be extremely dangerous. Despite this, bomb hunting in Vietnam is thriving. And fortunes have been made.

I went to Vietnam to document this fascinating story. After almost a week of roaming around the countryside with a group of fearless bomb hunters in the DMZ (demilitarized zone), I was mentally exhausted. There are few things worse than walking through the jungle, wondering if the next step you take is going to be your last because you got unlucky and triggered a mine. 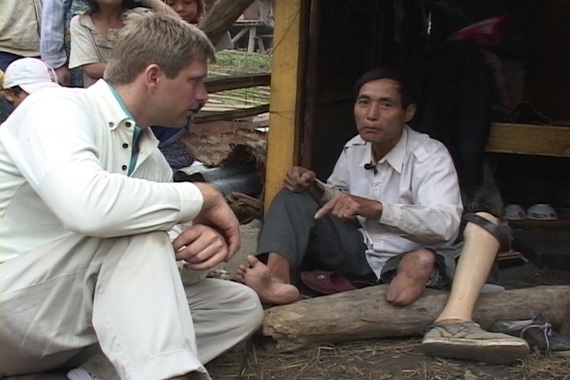 On my final day of filming, we ventured back into the jungle hillsides. I left the trail by just a few steps to search out a strange impression in the ground. It looked like a large object may have hit the earth in that exact area decades back. Without warning, from behind me, my interpreter tackled me. My video camera and I slammed into the ground. Everyone began shouting and pointing. In the earth, right in front of where I was walking was a small round buried object. It was a partially exposed landmine.

After being tackled, I lied still on the ground, staring at the landmine, which was only inches from me. While the mine did not go off, something in my head did. For me, nothing was ever the same again after that moment. The incident permanently seared itself into my psyche, reminding me of how precious our minutes alive on this planet really are. What happened to me can be aptly described as a philosophical bomb--which is why I consider it the most beautiful and transformative moment of my life. It triggered a response that I am still passionately pursuing today: the goal of eliminating human death and suffering.

Upon returning to the United States, I curtailed much of my journalism work, and began actively promoting the field of life extension science and transhumanism, areas of research that aim to use radical science and technology to stay alive as long as possible and improve the human condition. Many top scientists believe we have a good chance at conquering human death via modern medicine within 20 years. With enough resources directed at the research, we could probably do it in 10 years.

What is happening to our species is we are becoming far more than just human. All around us incredible advances in technology are changing and improving us. The advocates of this type of human progress are scientists, technologists, futurists, medical professionals, engineers, and everyone interested in using science and technology to significantly advance and evolve the human being. When you get a 3D printed organ to save the life of your child--that is it. When you turn on your cell phone and call someone on the other side of the planet--that is it. When you can't see because your vision has deteriorated, and a surgeon fixes your eyes with lasers--that is it. This futuristic and radical technology is all around us, and it's advancing exponentially.

A new era is upon us; an era where we suffer far less from the hardships our ancestors faced. Look anywhere around you: Paralyzed people in wheelchairs can walk via exoskeleton technology. Those born deaf can hear via cochlear implants. Those with memory loss from Alzheimer's can remember with brain chip implants. Those who lost arms in war zones and automobile accidents have robotic limbs with feeling sensors that are tied to their nervous systems. Indeed, modern science and technology are slowly eliminating all suffering and disease on our planet.

Despite the fact that the world is beginning to embrace such amazing innovation, some people argue that death is both necessary and beautiful. Some people feel death fits naturally in the cycle of human life. Others insist there would be no value or meaning in living without death. I disagree. In fact, I strongly disagree. Death is not beautiful at all. Perhaps the way a person dies can be beautiful. But the result afterwards, of not speaking to them again, of never seeing them again, of never holding them again--this is not beautiful.

Additionally, the idea that death is necessary to make life meaningful is also incorrect. Our lives have plenty of meaning and value without the spectre of death hanging over us. Consider this: Except for mean-spirited or insane people, few would endorse their loves ones (such as their children) dying one day just to justify the so-called meaning in their loved one's lives. Having meaning in one's life is not defined by whether one dies or not, but by whether that person chooses to see and find purpose in their daily existence, whatever that may be.

Billions of people unknowingly live in an indoctrinated global culture of death. Often, this is promoted by religious ideas which endorse afterlives. But cutting-edge life extension science is not interested in afterlives it can't see, know, or prove, but rather in what is taking place today: the living.

As a nonreligious person, I believe beauty (and meaning) end with death for any person who has once experienced or pondered it. This all means one very important thing: Preserving human life, memories, consciousness, and the general essence of a person is an imperative for beauty to exist to that beholder. Life extension science and technology are obvious ways to do that, and should be actively supported and pursued by society. Finally, death--especially in the 21st Century--should be seen for what it is: the ugliest thing we know in the universe.