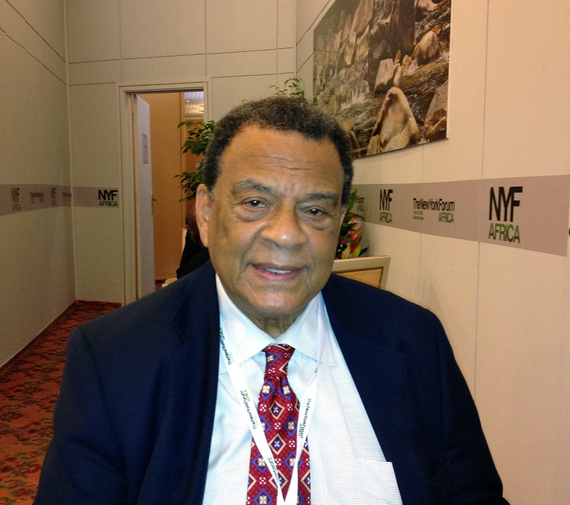 Andrew Young wants you not to worry. Despite humankind's failure to solve the problems of poverty, racism and inequality, and the smaller issues that cause us to despair, Young tells his listeners that a benevolent creator has everything under control. He offers this assurance in the biblical words of his grandmother .... "Don't be anxious about tomorrow... Consider the lilies of the field; they toil not..." and after a few more verses that roll easily off his tongue he adds with a beatific smile, "You don't have to be a believer to know that sounds good."

Young was in San Francisco recently, drumming up support for world peace, justice, compassion and his Andrew Young Foundation. In an informal - "You don't mind if I just sit in this comfortable chair instead of standing at the podium?" - talk at the Commonwealth Club, his remarks ranged from theories on how to make the world work to why prisons don't.

Just a few of those random thoughts include the following:

Re dealing with the bad and the angry: "Don't get mad, get smart."

Re getting smart - one of the first things Young did after being elected Mayor of Atlanta in 1981 was to increase the percentages of blacks and women in the police department, in order to insure that it reflected the population of the city. A story about how well that worked in one instance delighted his 2014 audience:

Anticipating two or three thousand people for a Ray Charles concert in Piedmont Park, the city sent a contingent of a dozen police officers to look after the crowd - but the crowd turned out to be over 100,000. "Ray Charles said he wasn't going out there," Young recalled. "He said, 'I'm blind, but I can see there's people pushing against the stage and I ain't going out there.' And we had a dozen police officers to handle 100,000 people." Enter one of the police contingent, "a tiny little woman named Sadie." Sadie mounted the stage, blew her whistle, got the crowd's attention and told them they were going to play a game. "You all know about Simon Says? Well, this is Sadie Says." When she blew her whistle, she explained, everybody on the front row was to turn around and face the opposite direction. When she blew it again, everybody on the next row was to turn around... and so on. By the time Sadie finished blowing her whistle, the entire crowd was facing away from the stage. "Now," she said, "everybody take ten steps forward." The crowd surge was ended, the concert went on as planned. 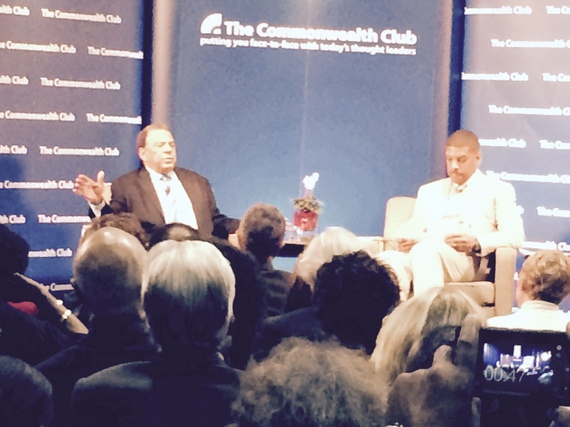 Re prisons: "You go to prison for taking money from an ATM; you come out knowing how to take the ATM."

Re global peace and prosperity: There are "ways to make the world work," Young believes. Because food and jobs are two of the keys, his foundation is pushing programs to make protein from duckweed in the south. Small farmers could be back in business, the hungry could be fed.

Young is almost as enthusiastically pro-duckweed as he is anti-Halliburton. "We don't need to be fighting ISIS," he says; "that's Halliburton's war. You want to go after people for not paying taxes? Go after Halliburton." And as to those wars, "One of the things we should know by now is that there is no military solution."

How can we find lasting solutions to issues like poverty and war? Young says, "I don't know how to do it - but our kids will know how to do it. I was in a restaurant where a two-year-old had his iPad out and said, 'Mom! They don't have wi-fi here!' -- but a few minutes later he said, 'That's okay Mom, I fixed it.'" Young urges audiences of all ages to work for peace and justice, acknowledging both the enormity of the tasks and the potential for success. And in the end, he says, "We just have to believe we've done the best we could." You don't have to be an Andrew Young believer to know that sounds good.

Sacramento Mayor Kevin Johnson, host of the recent event, asked Young which of his titles he preferred: Mayor, Congressman, husband, father, CEO, Ambassador...? The reply came with another quick smile.