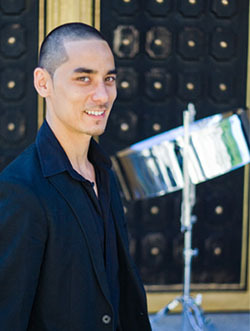 Andy Akiho is a master of the steel pan, and a talented and innovative composer of classical music. His knowledge of rhythm and percussion, which he gained through exploration of the steel pan, is expressed in his compositions. New York-based, and currently working on a Ph.D. in composition at Princeton University, he has traveled extensively in Trinidad performing on the steel pan.

His compositions have been performed by the New York Philharmonic, the L.A. Philharmonic, Bang On a Can, American Composers Forum, and The Society for New Music. Akiho's compositions have also been performed in major venues such as Walt Disney Concert Hall, Symphony Space, Carnegie Hall, The Metropolitan Museum of Art, MoMA, Lincoln Center, Merkin Hall, MASS MoCA, (le) Poisson Rouge, and John Zorn's: The Stone.

I first heard Akiho's music at a concert that the new music pianist Vicky Chow performed in Toronto.

I met Andy in New York City for an interview, which we did in front of the iconic Jackson Pollock painting at The Metropolitan Museum of Art. Akiho is unpretentious and has a genuine warmth to him, and the way he moves around has a kind of rhythm to it -- as though he is always feeling the rhythm of music as he talks to you.

Joel Garten: So tell me what you're doing with your music now?

Andy Akiho: Right now, I'm working on my longest piece yet, it's a percussion quartet for this newly formed group called the Time Travelers comprised of Ian Rosenbaum, Ayano Kataoka, Gwen Burgett and Svet Stoyanov. It's going to be about ten or eleven movements, and about forty-five to fifty minutes. That's what I'm working on immediately.

JG: So what's the idea behind the quartet?

AA: As far as concept, it isn't set in stone yet but I'm thinking of using the concept of seven pillars -- it's actually going to be called "Seven Pillars." I'm thinking of having seven movements with the full quartet, and four movements of solos between the full quartet movements, the solo movements featuring each member on a different variation or different instrumentation. So one of the solos would be glockenspiel, one would be prepared vibraphone, one is going to be marimba, and another with found objects such as glass bottles. Then, we're going to mix it all together with the full quartet movements.

JG: How are you going to prepare the vibraphone?

JG: So you're going to put the head of the tambourine down?

AA: Yes. Let's say, if I put it in a cluster around the accidentals and the naturals, probably around B-flat, B, C, C-sharp in that area, maybe it'll extend further than that, but it makes a pretty cool sound. And with the rubber bands -- I've been doing that a lot lately with marimba, the vibraphone and steel pan. It mimics Bartók snap pizzicatos when you snap them, and when you strike with a normal vibraphone mallet the rubber band takes away the metallic quality of the vibraphone and puts it in the realm of a marimba-like sound.

JG: Cool. How long will it take you to write that?

AA: I'm going to try to knock it out in a few weeks.

AA: No, realistically, it'll probably take me a few months, but my goal is to finish individual movements one at a time until I work it all the way up to the full ten or eleven movements.

JG: And is it going to be performed?

AA: We don't have a set premiere yet. There are going to be workshops in Miami, Michigan and in Amherst soon, but those are about presenting some of the ideas and maybe some of the movements or sections of the piece. And then, hopefully, the premiere will be in about a year.

JG: And what are the inspirations and influences in your music?

AA: As far as other composers or art?

JG: Or anything, yeah.

AA: I mean for me, it's a little bit of everything, it's hard for me to pinpoint any one thing -- I love architecture, I love visual art and I love listening to all types of music. I mean, there's a million people I could mention. You could just name off everybody that's ever done something amazing! I am inspired by Beethoven, Bach, Brahms, Bartok, Stravinsky, Cage, Debussy, etc. and then all the amazing composers that are out there right now like my colleagues and all my teachers who I've worked with recently. They have all been a huge inspiration, as well as everybody I meet outside of music too.

It's kind of obvious, but it's really my environment and my friends who I'm surrounded by that really inspire me. I often write different pieces in different cities, and I believe that has a huge influence on how I write. For some pieces I've written, I've traveled to six different places while I'm writing them, so the music has a little bit of each place in it.

JG: I remember being at a concert in Toronto given by the pianist Vicky Chow, and she played a piece you wrote for her?

AA: Yeah it was written for Vicky Chow and Vicki Ray. So Vicki Ray spells her name with an 'i' and Vicky Chow is with a 'y.' The title is like a palindrome. The 'V' is the center and 'ick' going out on either end of it and the 'y' and 'i' represents the scale, especially with the prepared dimes inside the piano. The piece has a lot of palindromes.

AA: Yeah, as far as the overall structure of the time in certain sections and the pitches. 99 percent of the piece is eight pitches that are repeated every octave. These eight pitches have an axis where it's symmetrical. I messed around a lot with the B-flat and A-sharp, so it was kind of mimicking the 'i' and the 'y' of their names. I was actually more interested in the sound of the piano prepared with dimes put between the strings. It reminds me of the sound of Balinese Gamelan and steel pan. It is something I learned from Vicki Ray when she did a piano workshop at Bang on a Can http://bangonacan.org/ in 2007. I was really inspired by that and I was always really inspired by Vicky Chow's incredible playing.

JG: So do you find that you work a lot with structures like that?

AA: Sometimes I do. With every piece I do something different, but I often use a lot of structures like that. But a lot of times, I'm intuitively writing at the steel pan, which is I guess is similar to how a lot of composers write at the piano because I don't know my way around the piano anywhere near as well as I do the steel pan. That's where I feel at home, and where I can improvise and create. That's how all my first compositions started out. I try to change it up almost every piece though.

JG: And do you perform on the steel pan?

JG: Is there a lot of repertoire for steel pan?

AA: There's getting to be more and more. I just saw Paul Lansky yesterday and he just finished a new steel pan solo for Josh Quillen and SO Percussion. It's definitely growing. If you're referring to bringing steel pan into the contemporary classical genre, it's really happening right now and I've tried to do a lot with that.

AA: There are a lot of people mixing steel pan with western classical instruments, but most of the repertoire exists mainly for colleges and steel bands or more towards the calypso soca pieces as well as arrangements of classical music.

JG: Okay. You are going to school now?

AA: Yes I'm still in school. I'm at Princeton right now. This is my third year.

AA: It's wonderful. It's a great environment to really do your own thing and be able to focus on your goals and writing with the support from your colleagues and the professors there. It's kind of a hands-off environment.

JG: So have you performed Morton Feldman before?

AA: Unfortunately, no. I really like his work, and he's a composer whose music I need to explore a lot more, too because I'm really into it. Most of my music isn't towards that style, but I love it.

AA: Yeah, I think it would be great.

JG: Because it's a great contrast, his music and the sound of the steel pan.

AA: Yeah I love his piece Crippled Symmetry, that's great. I know you're a big fan.

JG: Yeah. Have you done any jazz?

AA: Yeah, that's how I got started in composition. I moved to New York to try to become a jazz musician. I would work on improvisations over tunes, and then I would start to write my own tunes, and then those improvisations became more substantial. I'd start to just play for like an hour or something and then eventually I started playing the same things and those became my compositions, and I started orchestrating those.

JG: And did you have a technical background in music?

JG: What kind of rhythms do you gravitate towards?

JG: I actually have a lot of inspiration in my rhythms from tap dance.

AA: You're a tap dancer?

JG: Well when I was a child I did tap dance.

JG: And you know I started improvising music as a child. So some of the rhythms of tap dance got into my piano improvisations, and then they're still there twenty years later.

AA: That's awesome because it's like part of your blood. Yeah, that's amazing. I think a lot of my rhythms also stem from when I used to play in West African dance companies in South Carolina. The repetition and the way that all the patterns are really circular, where beat one can be almost anywhere, however you interpret it, or you can feel certain things in three, or you can really feel them in four -- I love that. I love working with that, but I like to do that even with other odd time signatures, and mess around with different polyrhythms like five/sixteen, five/four or five/eight and then imposing dotted eighth-notes against that. You know, just creating these illusions almost, I love working with that kind of stuff.

JG: What do you have coming up?

AA: Ensemble ACJW, a group based out of Carnegie, just performed a new piece at Carnegie Hall and Skidmore College. I recently performed in Tokyo for the Ark Hills Music Festival. I have a premiere coming up with Sybarite5 in December. I also have a premiere by Anthony de Mare for solo piano, with the Liaisons Re-imagining Stephen Sondheim project -- it's a response to Sondheim's "Into the Woods." "Vick(i/y)" is also going to be performed during MusicNOW, the Chicago Symphony's new music series.

Find out more about Andy Akiho on his website www.andyakiho.com

Joel Garten is a composer, pianist, artist, writer and entrepreneur. You can view his artwork and listen to his music on his website: Joel Garten, Artist and Composer. This article was originally published on Joel Garten's blog: The Beauty of Life.

Many thanks to Vicky Chow for helping to arrange this interview.