The 1994 North American Free Trade Agreement soured the American public on trade deals that were supposed to boost the economy -- remember the giant sucking sound that followed? -- but it left America's globe-spanning corporate behemoths panting for more.

Since then, powerful business interests have cheered the signing of 19 more such agreements. The three most recent, with South Korea, Colombia and Panama, won congressional approval in October.

These trade agreements have been an enormous boon to multinational corporations, making it easier for them to shift production to lower-cost countries, move capital across borders, expand into new markets and overcome foreign legal hurdles. They are consistently a top priority for the big-business lobbying groups, including the U.S. Chamber of Commerce, the National Association of Manufacturers, the Business Roundtable, the Financial Services Roundtable, the American Farm Bureau, Pharmaceutical Research and Manufacturers of America, and the Retail Industry Leadership Association.

Despite being hawked as job-creating measures that open the world to American goods, however, these trade agreements have historically resulted in massive outsourcing of U.S. manufacturing jobs and increases in exports.

"They may be enhancing corporate efficiency, but they're not enhancing job creation here in the U.S.," said Michael Wessel, a trade strategist who works with the labor movement.

And now the White House is forging another one -- this time a regional compact, known as the Trans-Pacific Partnership (TPP) Agreement, with Australia, Brunei Darussalam, Chile, Malaysia, New Zealand, Peru, Singapore and Vietnam. It's the first trade agreement entirely negotiated by President Barack Obama, the biggest since NAFTA -- and potentially a lot bigger if and when China and Japan join in, as they are expected to eventually.

The goal, according to the Office of the U.S. Trade Representative, is "to enhance trade and investment among the TPP partner countries, promote innovation, economic growth and development, and support the creation and retention of jobs."

This is a whole new kind of pact, the trade representative says. It will include "new cross-cutting issues not previously included in trade agreements, such as making the regulatory systems of TPP countries more compatible so U.S. companies can operate more seamlessly in the TPP market."

A CONSPIRACY OF SILENCE

Figuring out what this agreement will actually do is difficult, as the public is being kept almost entirely in the dark regarding the ongoing negotiations. The draft text, for example, is only being circulated to "cleared advisers," who include dozens of corporate lobbyists and only a handful of labor and good-government advocates.

The first official word that ordinary people -- and Congress -- will get about what's been agreed to is when the deal is complete, and all that's left is an up-or-down vote.

In the meantime, however, common sense dictates that dropping trade barriers with a low-wage country like Vietnam, for instance, isn't going to do wonders for the U.S. textile or apparel industries. And leaked drafts of the occasional chapter have made consumer and good-government advocates fear the worst.

As Zach Carter reported in October for The Huffington Post, one set of leaked documents shows Obama administration negotiators trying to reverse reforms made during the George W. Bush administration that were designed to increase access to affordable medicines in developing countries. Instead, the U.S. would impose a set of restrictive intellectual property laws that would help American drug companies secure long-term monopolies overseas and increase drug prices.

The Electronic Frontier Foundation, one of the groups that led the recent, successful grassroots opposition to two bills that would have given corporations new powers to censor the Internet, sees the TPP as a backdoor effort to rewrite global rules on intellectual property enforcement -- including U.S. rules.

The proposed Stop Online Piracy Act and Protect IP Act were "bad laws prepared in secret, but they were defeated once they had to face public opinion," Maira Sutton, international outreach coordinator for the foundation, wrote via email. "The scary thing about secret agreements like TPP ... is that they may already be well along the process by the time the public has a chance to learn about them and speak up, which means that unpopular censorship provisions, like those in SOPA and PIPA, can be slid in under the radar."

Public Citizen, the nonprofit consumer advocacy group, warns that the pact will likely allow foreign companies to sue governments to enforce the agreement in United Nations and World Bank tribunals. There, Pubic Citizen argued, "they can demand taxpayer compensation for domestic policies that investors claim undermine their new privileges established in the pact."

THE POWERS THAT BE

"The polling shows Americans on a bipartisan basis hate our current system of trade agreements," said Lori Wallach, director of Public Citizen's Global Trade Watch. "In the light of this, in an election year, how is it possible that this huge NAFTA with Asia is being discussed -- much less that the Obama administration is rushing it forward, trying to get it done this summer?"

Wallach answered her own question: Major business interests use these trade agreements to push policies that won't fly even in a Republican Congress "by branding them as free trade, trade expansion -- all those appealing brands."

Behind this continuous stream of trade agreements, she said, are banks, multinational manufacturers, Big Pharma, Big Tobacco, oil and gas companies, agribusiness and other sectors -- all pursuing their bottom lines. "This literally is in one fell swoop one of the most elegant one-percenter corporate power grab mechanism ever designed," Wallach said.

The corporate lobbyists were certainly out in force this past fall, in the run-up to the vote on the latest three trade agreements, the biggest one of which was with South Korea.

The Chamber of Commerce combined forces with Boeing, Chevron, Pfizer, Goldman Sachs and Citigroup to form a U.S.-Korea FTA Business Coalition. Other big-business groups and major corporations joined them in their full-court press.

By contrast, the outgunned opposition was led by consumer groups and small, domestic companies, who, unable to seize the same opportunities available to multinationals, have found themselves steadily losing market share and forced to cut production and jobs.

The final House votes weren't even close. Republicans wanted the pacts so badly they overcame their aversion to supporting anything Obama proposes and voted overwhelmingly in favor. Most Democrats opposed the president -- but even among the opponents, Wallach said, the passion was dimmed.

Ever since the Supreme Court legalized unlimited political spending by corporations, Wallach said, "the dynamic is totally different." The greater threat that deep-pocketed corporations now pose to any incumbent with an even slightly contested seat looms over every exchange between lobbyists and members of Congress.

TO BRING MANUFACTURING BACK

In his 2012 State of the Union address, President Obama announced a plan to "bring manufacturing back" to the United States through tax code changes -- eliminating a tax break that rewards outsourcing, expanding a tax cut for domestic manufacturers and imposing a minimum tax on overseas profits.

But previous free trade deals have already made the incentives for outsourcing so strong that these measures, even if implemented, would likely fail, said Lee Sheppard, contributing editor at Tax Analysts, a nonprofit publisher of tax information.

"You can't use the tax law to make up for things that you gave away with trade deals," Sheppard said. U.S. jobs are lost, he said, "when we let in products made by poorly paid workers who live in dormitories and work 12 hours a day."

How will the TPP fare in the end? The corporate giants who will profit are bound to keep pushing it forward, as they have earlier trade agreements.

But Wessel, who looks at the effects of free trade agreements beyond the corporate bottom line, remains skeptical about these deals: "The benefits have not materialized." But he's holding on to some hope for the TPP "that there will be enough changes in the approach that they will maximize benefits for American workers. I think it is too early to tell."

Blocking a trade agreement, Wallach said, takes a combination of mass media coverage, grassroots activism and members of the public making clear they will hold their congressmen accountable. But the increasingly complex nature of the agreements, combined with their free-trade branding, has resulted in too little coverage of trade issues, she contended. "The mainstream media doesn't dig into it," Wallach said.

And that may make all the difference. "If people understood what this really was," she said, "they'd be surrounding the trade representative's office with pitchforks." 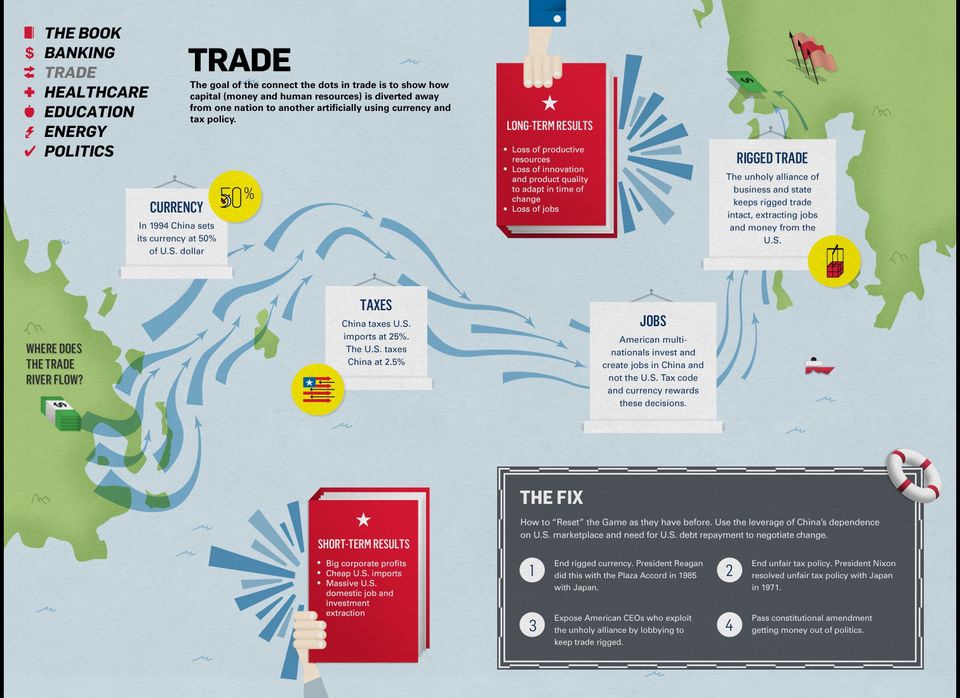