The majority of potato chip brands have always been gluten free. Yet, when someone is grabbing a bag at the grocery store, or offering you some at their house, they announce "they're gluten-free!" as if that's some sort of health benefit.

Sadly, many are picking up gluten free breads, cookies, and crackers thinking that these products are improving their health and physique.

If someone's gluten-intolerant or gluten-sensitive, deciding to go gluten-free will no doubt cut down on the inflammation they're experiencing from wheat, barley and other gluten-containing grains. However, anyone thinking that switching to quinoa pasta, rice crackers, and gluten-free muffins will lead to fat loss is seriously misguided. At the end of the day a brownie is still a brownie, and gluten-free or not, eating one everyday after lunch or consuming a breakfast that looks like the one below isn't going to fix your waistline: 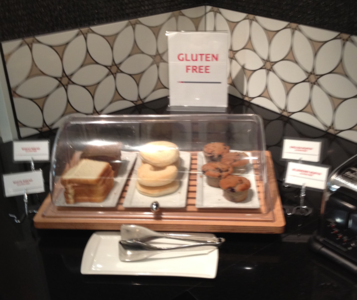 Don't get me wrong, a large portion of the population (me included) can improve their health and longevity by eliminating wheat from their diet completely.

Research from 2003 in the Archives of Internal Medicine suggests that varying degrees of inflammation from gluten are experienced knowingly or not in as much as 4.5 percent of the population (1 in 22).

However, if your goal is fat loss, filling the wheat void with equal or greater amounts of starches and high glycemic carbohydrates will not help.

Our Hunter-Gatherer friend pictured below (who clearly has nothing to lose) consumed an average of 80 grams of carbohydrates per day! 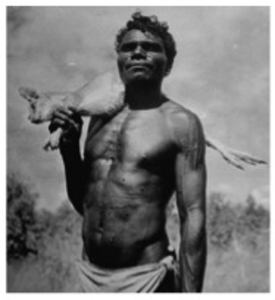 Just like we were tricked into selecting 'low-fat' and 'low-sodium' packaged products because of their apparent benefit, food marketers have simply found another way to convince you that their bag or box of garbage is healthy.

The market for gluten-free products totaled $6.3 billion in 2011!

I'm not saying don't go gluten-free, as I think the picture below from Dr. David Perlmutter's book, Grain Brain, does a fantastic job showing the impact that inflammation (from gluten sensitivity) can have on your brain: 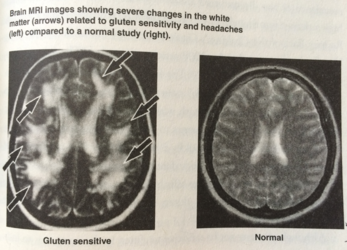 However, keep in mind that pizza is still pizza, pancakes are still pancakes, and a slab of pound cake beside your coffee on a Tuesday afternoon is and always will be a bad choice... gluten-free or not.

Mike Sheridan has been advising on nutrition and fitness for nearly a decade. His 3-step transformation plan has helped a tremendous amount of people lose the fat and keep it off without counting calories, doing cardio, or sacrificing their health.