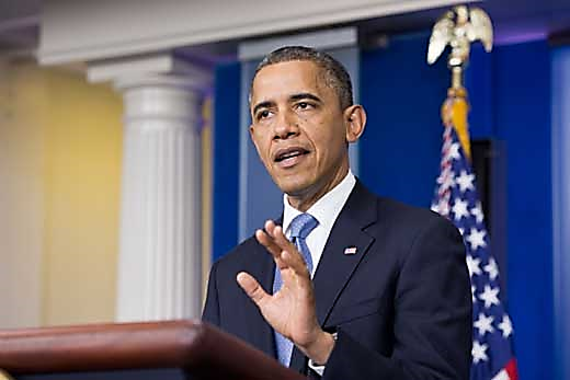 When American presidents retire, they are supposed to exit the national stage. Republican presidents, in particular, Ford, Reagan, and the two Bushes, have kept a particularly low profile. They wrote their memoirs, dedicated their Presidential Libraries, but beyond the occasional speech or in depth interview, retreated into a quiet retirement. Democratic presidents, Carter and Clinton, have been more active-engaging in all sorts of "do-good activities." Activities that in Clinton's case also proved to be particularly financially rewarding.

Barack Obama may prove to be the exception to the rule. To begin with he has already indicated that he and his family will stay in Washington DC for the foreseeable future. He has also strongly signaled that he intends to remain engaged in national politics and that he may emerge as a vocal critic of the Trump administration. Significantly, the White House has already announced that President Obama will have a closed-door meeting with Congressional Democrats on January 4, to discuss strategies for blocking the pending Republican effort to dismantle all, or a significant portion, of his Affordable Care Act. That is a very unusual move for a lame duck president just a few weeks away from his official retirement.

There are a number of reasons why Barack Obama may choose to stay engaged in national politics, and there are significant consequences to that decision. First, Obama is still relatively young. While it is unlikely that he would seek another elected office in the U.S., his name has been touted as a potential U.S. Supreme Court Justice or even as Secretary General of the United Nations. Both eventualities are long shots, but neither can they be entirely ruled out.

There is also the possibility that his wife, Michelle Obama, might seek elected office. That prospect generated palpable excitement in the Democratic Party-even though Michelle Obama has not given any indication that she wants to purse a political career. Besides, being the wife of a popular Democratic president is no assurance of political success. The last time the Democrats followed that strategy it didn't work out very well for the party.

The most likely reason why Barack Obama has a vested interest in staying on the national stage is to defend the legacy of his administration. Unlike past presidents, the Obama administration did not produce a substantial legislative heritage. Outside of the Patient Protection and Affordable Care Act, better known as Obama Care, and the Dodd-Frank Wall Street Reform and Consumer Protection Act, there is not one significant, enduring piece of legislation produced by the Obama presidency.

The Affordable Care Act is going to be extensively revised and, while there are portions of it that will survive, what is likely to emerge is going to have little resemblance to the original legislation. The same will be true for Dodd-Frank. Their status as a legacy of the Obama Administration is in doubt.

Internationally, outside of a New START nuclear arms limitation agreement with Russia, there was not a single significant treaty that was ratified by the Senate during Obama's tenure. During the eight years of the Obama administration, the Senate approved a total of 15 treaties, compared to the 163 treaties it approved during the eight years of the Bush administration. Those treaties that were ratified by the Senate included four agreements concerning fisheries, free trade deals with Colombia, Panama and South Korea, and mutual extradition treaties with Chile and the Dominican Republic.

On the whole, those treaties are hardly the stuff of a foreign policy legacy. Significantly, the most important international initiatives of the Obama Administration, the Iranian nuclear agreement (Joint Comprehensive Plan of Action with Iran), the "thaw" with Cuba, and the Paris Climate Accords, were accepted by the White House without seeking Senate ratification. Many of the initiatives of the Obama government were carried out through a combination of executive orders and administrative rule making. While such decisions cannot necessarily be revoked overnight, neither do they have the permanence or longevity of Congressional authorization.

In short, in the determined hands of the incoming Trump Administration, much of the record of the Obama presidency may end up on the proverbial "cutting room floor." Obama may have a vested interest in staying on the national stage because it may be the only way he can preserve any significant legacy of his eight years as the president of the United States.

That decision may have a significant impact on the Democratic Party and its ability to craft a new message in future elections. One of the peculiar features of the 2016 elections was the fact that over his presidency, per the Gallup polling agency, President Obama averaged a 48 percent approval rating, while at the same time an average of 76 percent of American's disapproved of the country's direction. Disapproving of "the country's direction" is not quite the same as disapproving of the president's policies, but it comes awfully close. That means only about 24 percent of the country, on average, approved of his policies. A gap of 24 percentage points between his approval rating as a president and the approval of his policies is unprecedented.

That gap proved to be a significant challenge for the presidential campaign of Hillary Clinton. The campaign had to embrace Obama and his Rainbow Coalition in order to win the election, while at the same time keep its distance from those policies that were unpopular. Embracing a sitting president but not his agenda is, from a policy-crafting standpoint, an exceedingly difficult thing to do. Accept those policies and the Clinton campaign risked being portrayed as little more than an Obama third term. Differentiate yourself from the Obama agenda too much and your positions risk being seen as an implicit criticism of the Obama White House. That may be one reason why the Clinton campaign focused so much of its election strategy on attacking and demonizing Donald Trump.

The Democratic Party is going to have a similar problem as it prepares to contest the 2018 mid-term elections and even more importantly the 2020 presidential election. Like the Clinton campaign it wants to preserve the Obama Rainbow coalition and leverage it to elect its candidates, but at the same time it needs to keep its distance from the Obama Administration's less popular policies. That is going to be harder to do if President Obama remains on the national stage and continues calling on Democrats to vigorously defend and preserve the legacy of his administration.