EDITOR'S NOTE: Michael Quattlebaum Jr., also known as Mykki Blanco, said in a recent interview that anyone discussing or writing about the latter persona should use female pronouns. For that reason, this article refers to Mykki Blanco within the feminine framework of gender identity.

Britney Spears and her new single "Work Bitch" are coming under fire by performer Mykki Blanco, who claims that the pop superstar is attempting to exploit the bankability of gay culture, claiming "this is not 'gay pride' it's 'gay marketing.'"

Blanco, a gender-bending queer performer, artist and musician, lashed out at the pop princess on Twitter last Sunday, calling the single "tacky" and asking "is it just me or is EVERY female pop star currently in a war to secure as many GAY fans and gay $ as possible ?"

Many of the Spears-referencing Tweets have since been deleted, but check out what Mykki had to say from this screengrab via OMG Blog: 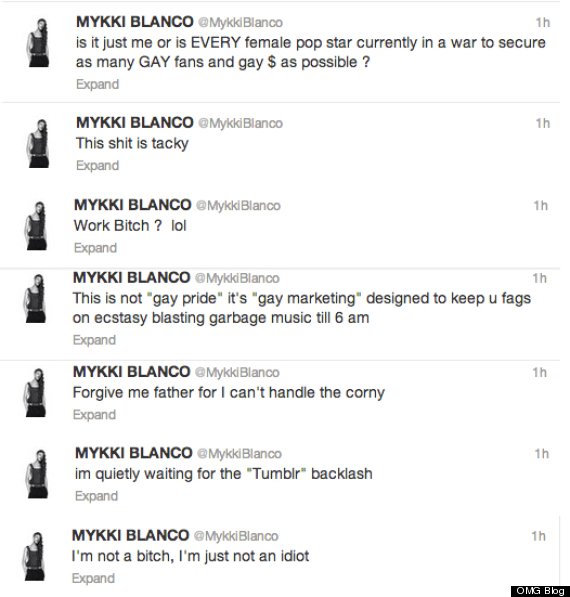 Spears, who was previously slammed for attempting to exploit the gay community during the release of her last album "Femme Fatale," was rumored to have recruited drag icon RuPaul as a feature on the track prior to the song's release. Indeed, a number of "Work Bitch" and "Supermodel (Of The World)" mashups have hit the web in the 24 hours since the song has been available.

For more on Mykki Blanco and the way sexuality and gender identity play into her work and the formation of her character, check out this interview.

Also, have a listen to Britney's "Work Bitch" below -- what do you think about Blanco's claims?

Britney Spears Blasted For 'Gay Marketing' By Mykki Blanco On Twitter
Gay Pride Anthems 2012
1 / 43
'Over The Rainbow,' Judy Garland (1939)
It's shocking to think now, but Judy Garland's signature tune was initially deleted from "The Wizard of Oz" because MGM executives thought it slowed down the action of the film. Ranked by the American Film Institute as the "greatest movie song of all time," it has since been recorded by Eva Cassidy, Patti LaBelle, Kylie Minogue, Matthew Morrison and others.