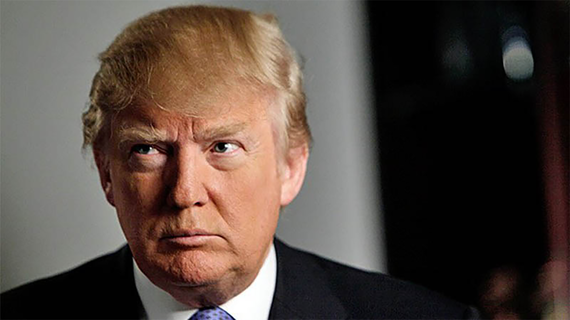 Trump fits the classic definition of a demagogue: a rabble-rouser who appeals to the emotions, fears, prejudices and ignorance of the lower socioeconomic classes in order to gain power. Demagogues oppose deliberation and advocate immediate, action to address a national crisis; they attack moderate and thoughtful opponents as being weak. .

No wonder his populist rhetoric has been attacked by Republicans and Democrats alike. This, and his other comments, are reminiscent of hate speech by radical fringe groups.

The conventional wisdom is that he can't be elected president, that the Republican convention will repudiate him, that Hillary Clinton will destroy him in a general election.

But these are extraordinary times.

Americans feel under attack by Islamic terrorists and by the continued economic decimation of the middle class at the hands of the One Percent, that seems to have taken over the political and economic system for their own enrichment.

Trump has the easy answer: he is strong and will protect us.

No matter that his easy answers on combating terrorism are unconstitutional and profoundly un-American.

But, there have been odious precedents in American history in times of fear and disruption.

In one of the ugliest episodes of American history, Franklin D. Roosevelt incarcerated 120,000 Japanese Americans in 1942, who had been law abiding and loyal U.S. citizens.

In 1882, a federal law prohibited all immigration of Chinese citizens, which was the defacto legalization of racial discrimination, according to one U.S. senator at the time. The legislation was nevertheless upheld by the Supreme Court in 1895.

While terrorism seems to be the driving issue of the day, the continuing economic woes of the middle class are equally powerful agents which could lead to the rise of a demagogic President.

The polls show that 62.2 percent of voters think the country is headed in the wrong direction. This is the 11th straight year of wrong-track pessimism in national polls.

The depressed middle class is fed up with the broken economy caused by the economic upheaval of a post manufacturing America.

The covenant between "Big" government and free markets to deliver a broadly based prosperity has been broken.

Since the 1980s, the percentage of Americans owning stocks or houses is way down.

Since 2006, only the top 10 percent of families have seen their income go up. The income of the bottom 90 percent has fallen.

John Maynard Keynes predicted in 1925 that in 100 years, by 2025, productivity would rise exponentially so that nobody would have to work anymore. See Atlantic Magazine's "A World without Work."

All well and good for some.The productivity bonanza Keynes predicted is largely coming to pass. But the downside for most is that the bountiful fruits of technology and globalization have been gobbled up by a greedy elite, while everyone else has been left behind in a jobless gulag.

"A political storm is not coming. It is already here"

We are living in a transformative economic time that needs instant correcting. The world is at a crisis point, the likes of which we have never seen before, argues Chris Hedges in a new book.

Hedges notes parallels between our time and the 1848 revolutions throughout Europe and the French Revolutionary era that preceded it.

Populist anger can power massive political disruptions from the right and the left sides of the political spectrum.

Andrew Jackson targeted a wealthy and influential elite in the 1830s; Teddy Roosevelt revolted against the excesses of the Gilded Age in the beginning of the 20th century, Franklin D. Roosevelt is credited with saving capitalism by providing a safety net in the 1930s; and the youthful disruptions in the 1960s, profoundly altered our culture, which, ironically, led to a right-wing Nixon reaction in 1968.

Trump's populist ascendancy has been compared to Father Charles Coughlin in the 1930s, Huey Long in the 1940s, Ross Perot in the 1992 election, Hugo Chavez and George Wallace.

European demagogues and populists have also been on the rise in this era of economic turmoil. In Italy, Trump-like Silvio Berllusconi is the most prominent example. But there are others: Jeremy Corbyn's recent populist takeover of the Labour party, the leftist Scottish National Party and the right wing UKIP are examples from Great Britain. Other outsider successful populist movements include the Syriza coalition in Greece, the Podemos in Spain and the Five Star Movement in Italy.

Even Republican strategist Glen Bolger wrote recently in his blog, "A political storm is not coming. It is already here."

Let us not forget that in the 1920's Hitler was able to gain traction with demagogic appeals and simple solutions to devastating economic conditions following post World War II. Hitler never won a majority vote, but the opposition was so splintered that he was able to seize absolute power nonetheless.

Donald Trump is not a Hitler and may not even believe all the vile proposals that he is espousing.

Trump is going all-in on the bet that there will be major terrorism attacks between now and the first primaries. He feels he can keep his no-nothing 30 percent Republican base and capture the nomination with early wins and then he will see.

It is a clever strategy. Don't discount his chances.