The idea that Democrats want to make America more like Europe is a favorite Republican attack line. Writing in the New York Times, David Brooks expresses amazement that so many millennials are supporting Bernie Sanders, an open admirer of the European model.

Why would anyone in his right mind favor "sluggish" Europe over "vibrant" America? If we focus on data rather than snappy sound bites, the attraction of the European model is clear: European countries, especially the high-income democracies of northern Europe, make better use of their wealth in supporting the well-being of their citizens.

Here is a chart that gives the big picture. The horizontal axis shows gross domestic product per capita. (GDP here is measured at purchasing power parity to remove distortions caused by over- or undervalued exchange rates.) The vertical axis shows a measure of human well-being called the Social Progress Index. Unlike some other broad indexes of human welfare, the SPI does not explicitly include income, wealth or GDP. Instead, it regards them as "inputs" that support the production of "outputs" like health, security and personal freedoms. 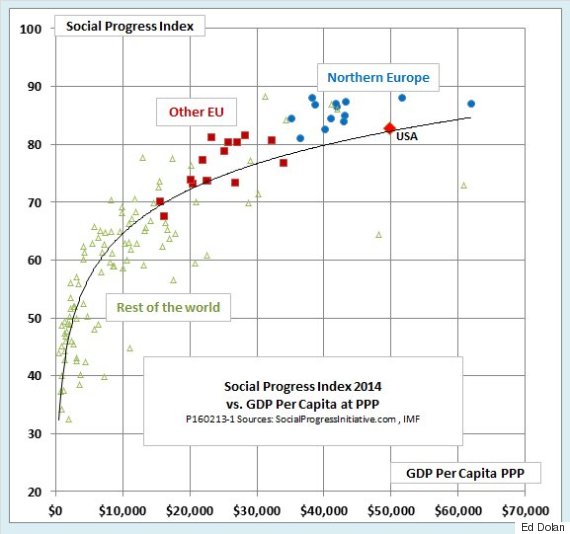 Several features stand out in the chart. First, as shown by the black trend line, higher GDP does, on average, contribute to human welfare, although the relationship is far from linear. At low levels of income, growth of real GDP has a strong payoff in quality of life. For middle- and upper-income countries, higher GDP is still associated with improvements to human welfare, but the relationship is not as tight and the payoff to an extra dollar of economic output is less. New Zealand, the country with the highest SPI index of all, has a relatively modest per capita GDP of just over $30,000.

Second, we see that the wealthy countries of northern Europe, shown by the blue dots, all lie above the trend line. Given their incomes, they do better than we would expect at converting economic performance into good lives for their citizens. The United States, although among the very wealthiest countries in the world, does only an average job.

Third, we see that the somewhat less prosperous southern and eastern members of the European Union, shown by the red squares, also perform rather well. All of them except Romania, Greece and Italy lie above the trend line. Some of them, including Estonia, Portugal, the Czech Republic and Slovenia, have SPI scores nearly as high as the U.S., despite having only about half the GDP per capita.

European countries, especially the high-income democracies of northern Europe, make better use of their wealth in supporting the well-being of their citizens.

But, you may say, the very name of this Social Progress Index makes it sound rigged to reflect left-wing values. What about things that conservatives prioritize, such as security from crime and terrorism, respect for property rights, absence of corruption, literacy and freedoms of the press, speech, religion and assembly? It turns out they are part of the SPI too.

We can get a clearer picture by breaking down the SPI into three components that its authors refer to as "Basic Human Needs," "Foundations of Well-being" and "Opportunity." Basic Human Needs include indicators like nutrition, basic medical care, access to clean water, sanitation, shelter and security from crime and terrorism.

The next chart shows that northern European countries are among the best in the world in providing for the basic human needs of their citizens. All of them do a better job than the U.S., which, as shown by its position below the trend line, does significantly worse than expected for a country with such a high income. Most of the remaining members of the EU also do a better than expected job of providing for basic human needs, relative to their lower levels of GDP. 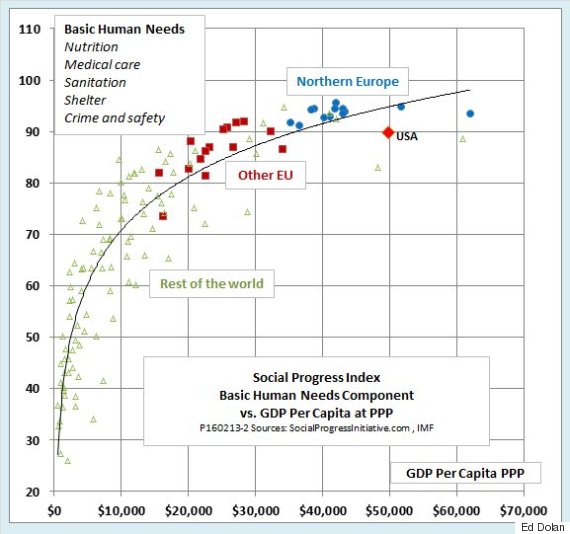 The picture is very much the same for the "Foundations of Well-being" group, which includes indicators like literacy and quality of primary education, access to mobile phones and Internet, life expectancy and environmental quality. European countries, by and large, perform better than expected for their levels of GDP. All of the high-income Northern European countries do better than the U.S., which, again, lies well below the global trend. Most of the eastern and southern EU members outperform the U.S. too. 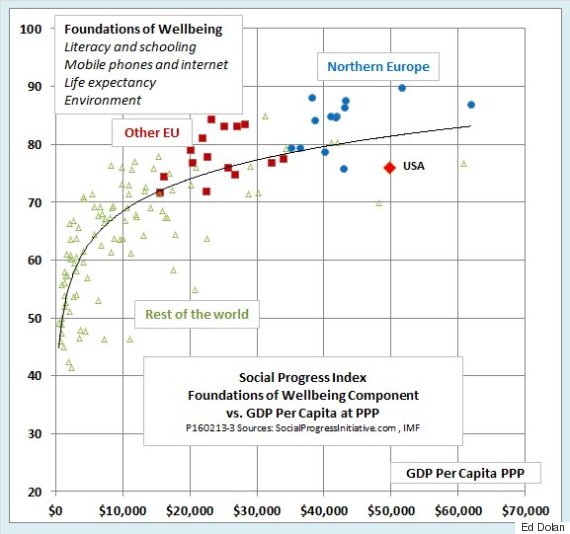 Still, you may be thinking: "Isn't it true that Europeans pay for their welfare state benefits by accepting reduced freedoms and opportunities?" Not really, as the next chart shows. The "Opportunity" component of the SPI includes indicators of political rights, freedom of speech and religion, property rights, tolerance, freedom of personal choice and access to higher education.

The U.S. does perform well in terms of "Opportunity" indicators, but not conspicuously better than many northern European countries. In contrast to the other groups of indicators here, the U.S. lies well above the global trend line relating opportunity to GDP per capita. However, that is not because it outperforms Europe but rather because the trend line is pulled down by the dismal record on opportunity, freedom and tolerance of a handful of resource-rich but undemocratic countries like Saudi Arabia, the United Arab Emirates and Russia. 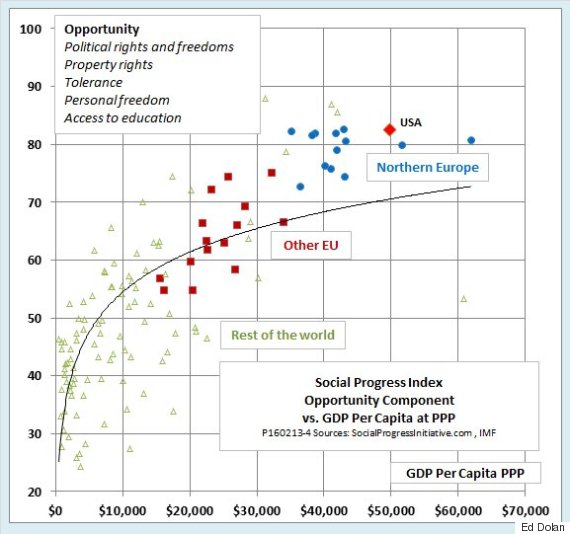 So just where is the surprise? Why should we be amazed that young voters think it would be not be so bad if America were more like Denmark, Finland or the Netherlands? In a recent interview, George Stephanopoulos cautioned Sanders that Republicans were likely to jump all over him for saying the U.S. should be more like Scandinavia.

Of course, Europe is not a monolith. Not every European country does everything right, nor does the U.S. do everything wrong. It is nice to know that it is possible for a country to provide its citizens with basic human needs and the foundations of welfare without sacrificing freedom and opportunity. Europe points the way.

Bernie Sanders On The Campaign Trail