When a health professional removes his Ebola suit in Bo, Sierra Leone -- a country where the virus is still spreading at full speed -- he has a choice. He can either place one foot in front of the other, like a Michael Jackson moonwalk, or he can clap his ankles together and open up his feet. Meanwhile, another health professional assists him so that the disinfection does not miss a single square centimeter that's been exposed to the disease. In this high-risk area, there's no such thing as too many precautions to contain the virus, which has already claimed 6,070 victims, according to the World Health Organization (WHO)'s latest report.

"Part of the material is destroyed," says José María 'Jota' Echevarría, a Spanish doctor who just came back from Sierra Leone. "Glasses must be cleaned three or four times in a bucket filled with chlorinated water in order to disinfect them. You must wash your hands all the time. Some days, up to 60 times."

In Sierra Leone, Echevarría has led a team trying to establish a center for Ebola diagnostics and identification. The center, now run exclusively by the International Rescue Committee, the NGO he works for, is one of the frontiers of Ebola, the first door the local population must step through after beginning to show symptoms of the disease.

Working alongside the Centers for Disease Control and Prevention (CDC), which has a lab in the area, Echevarría's team is in charge of deciding whether patients should remain in a transit hospital, whether they should be sent home, or whether they must be transferred to a Doctors Without Borders facility for treatment.

For 20 years, Echevarría has worked on humanitarian aid projects. They are more rewarding than any first-world operation room, he says. In October, after Spanish nurse Teresa Romero was infected with Ebola in Madrid and was subsequently blamed for it by Madrid's Minister of Health, the affable doctor sought out a media outlet where he could explain, based on his own experience in Sierra Leone, how people should protect themselves from the virus. His article in The Huffington Post Spain soon went viral, with more than two million hits. More than 130,000 people shared it on their Facebook profiles.

His article went beyond the controversy in Spain. It was a letter borne out of his experience. Echevarría published it shortly before coming into contact with a patient who was likely infected, which led him to believe that he might also be infected. After learning he does not have the disease, he spoke to The Huffington Post about his experience treating the virus.

What's it like to come back from [fighting] Ebola? Living through it is sort of like being a frog in a pot. If you put it in hot water, it will jump immediately. But if you put it in cold water and slowly warm it up, it won't realize what's going on until it's too late and it'll be cooked. I've lived through stressful situations in the past: kidnappings, armed violence, lack of security. Even if you're having an awful time, you are conscious of what's going on and you can control it. They are human beings you can communicate with, no matter what. You can't communicate with Ebola. You don't know exactly what it is, the exact transmission mechanisms, and you see extremely well-prepared and protected people that somehow get infected. You are constantly stressed, but you are not aware of it. Coming back is [therefore] a lot harder. You take much more time recovering, and then you become aware of where you've been, of the risk you were in, of the fact that you have a wife and five children. It affects you much, much more.

Are we winning the battle against Ebola? In Sierra Leone, Ebola is completely out of control. We are now able to provide patients with better care and there are more beds. There is now more and more money -- although Spain, shamefully, is not giving anything. But we still need much more. It is said that there are currently 5,000 cases, but there are many more. The numbers authorities put out are very low. Right now, in Sierra Leone, there may be more than 1,000 new cases each week. The World Health Organization thinks that by the end of the year there could be more than 10,000 each week. If the mortality rate is 60 percent, you can figure out the results.

The virus is transmitted through fluids. Knowing that, it's possible to increase precautions. But there are still many doubts and fears... We don't know anything. We don't know who the transmitter is. We suspect it's the fruit bat, but it's not clear. It's been established that the transmission mechanisms are fluids, any liquid from the human body. But the way in is not altogether clear. There's been contagion amongst the personnel working with this, even when they are very well protected. And it's very hard to identify how that happens. It is said that if there are no symptoms, there is no contagion, and that the first symptom is fever. We met a father who had two kids with fever. The mother had died from Ebola. After finishing our analysis, the two kids were negative and he was positive. We sent him to the treatment center, and he took his children there because he had nowhere to leave them. The situation remains the same. He is infected, but has no symptoms, and the kids have fevers, but are not infected. Three days later, the father develops a fever and suddenly the three of them are infected. He had no fever, but he was infected, which destroys the theory that says that without fever there won't be contagion. In medicine, two and two rarely make four. 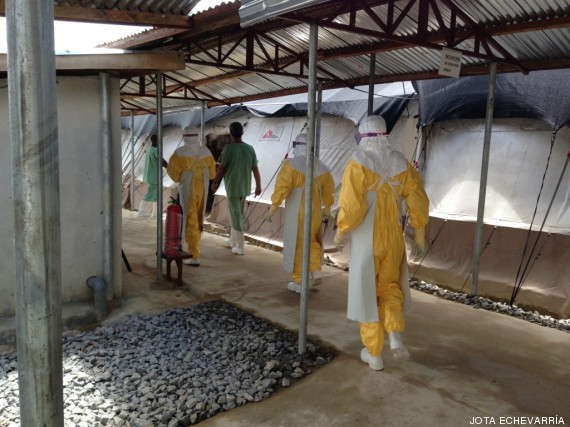 That is why, when you learned you'd been in contact with a suspicious case, the world came crashing down... At our treatment center, there is a high-risk area from which no one can depart. That's where the patients are. When health personnel go in, they are completely protected. On the way out, they remove their protective equipment in accordance with very specific procedures. One day we were in the low-risk area and there was a kid who had exited the high-risk area. So there was probable case. We started a follow-up protocol for all the people in the area. The kid's results came in and he tested positive.

What were your thoughts? I freaked out. I wasn't sure if I had touched him or not, if I could be infected. Then we performed a second analysis and it came back definitely negative. But he was running a fever and his father had had Ebola. For a time I was really scared and I kept telling myself, "It turns out I came all the way from Spain to work here, and now there's a 60 percent chance that I will die here."

You wrote an entry in your blog for The Huffington Post that broke all the records. More than two million views. Why were you so critical? I wasn't critical. I criticized the Health Minister because he has no shame. I wrote what you had to do, what we were all doing. Teresa was infected because things weren't done correctly and neither she nor the rest of the personnel were properly trained. Everything is on the Internet! The suits, how to set up an isolation unit ... It's easy to know what to do. And they didn't. Even if they made things better afterwards.

You also criticized the fact that the government is not giving enough funds to fight the epidemic. It's shameful that the Spanish government has not joined in and supported [the fight]. And I am not talking about giving funds to me or my organization, the International Rescue Committee. We don't expect any aid from the government. I am talking about Doctors Without Borders. It's beyond comprehension that the government hasn't gone head over heels to support them. If they had only used up half of what they've spent on the black card banking scandal... Or a tenth of what has been stolen in the cases of corruption... with that money, we could end Ebola.

Has the perception of the disease changed among the local population? In June, when I was there for the first time, they had already started avoiding greetings, shaking each other's hands and touching each other. But, in general, the message hasn't been conveyed well. The local population distrusted doctors because they saw that the virus was not common and that when their loved ones were taken to a hospital they usually died. There have been lots of rumors -- that Ebola was witchcraft, that the government had begun an ethnic cleansing campaign, that it was divine punishment, that they took you to the hospital in order to harvest your organs... And then they won't allow you to inspect a corpse! People don't understand what's going on because they haven't been heard.

The so-called First World can't seem to get it right even when they are trying to help. Here, we listen to anyone on the television. We believe what he says and we follow his instructions. [In Sierra Leone] they don't. They need someone from their own community to guide them. Otherwise, they believe they are being tricked.

Why do you do this? Why run all these risks? [He pauses for a few seconds.] Because I like it and because someone has to do it. [He laughs.] I don't go there to help because I believe that they are helping me more than I am helping them. I am utterly happy doing what I do and I sleep like a baby. I am happier doing this than I would be if I had stayed here. You see people that have nothing and that are going through unbearable suffering, people that were forced to flee without anything to call their own, people who can survive through charity. And then you see how they thank you. Not with a "thank you," but rather by sharing a chicken leg with you. They'll suck the bone so you can eat the meat.

Is it worth it, then? In truth, I am not sure whom I have helped in these 25 years. When I was a surgeon -- I was sure about it then: I helped my surgery patients. It was direct. But with these macro projects... Setting up care centers like the one for Ebola, have I really helped anyone? Are we helping people with this Ebola center? We are improving the infrastructure and reducing waiting times. Theoretically, yes, we are helping. Probably. That's what we are there for. But, to tell you the truth, I am not certain. 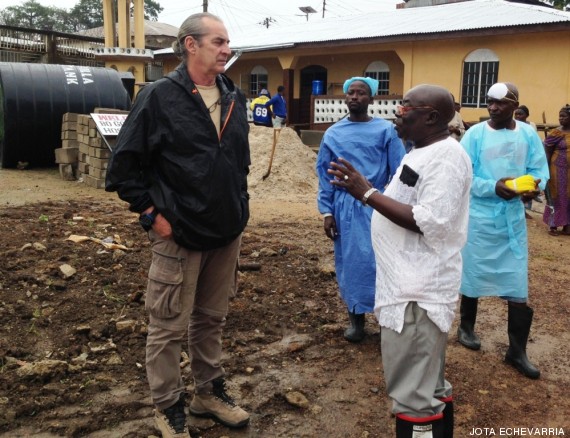 (Image credit: Jota Echevarría) This article originally appeared on HuffPost Spain and was translated into English.