True story: Early this week, a griffon vulture flew across the Israeli border and into Saudi Arabia, where it was captured on suspicion of espionage. Local authorities found a GPS transmitter on the bird as well as a leg bracelet emblazoned with TEL AVIV UNIVERSITY. Despite claims by Tel Aviv University scientists that the creature had been tagged as part of a long-term study of area migration patterns using satellite tracking, Saudi Arabian newspaper al-Weeam reported the likelihood of "a Zionist plot." [read Huffington Post news account]

This concern comes on the heels of recent reports of sharks and jellyfish weaponized by the Mossad, the Israeli foreign intelligence service, then dispatched to wreak havoc on Egyptian tourism. Moreover, as Middle Eastern rumor has it, Israel possesses unmanned aerial vehicles -- a.k.a. drones -- disguised as barn swallows, so the captured vulture could at least be a decoy. As one al-Qaeda member recently lamented: Step out of your house, you risk being blown up; Stay inside, your house gets blown up too. Whether the vulture innocently flew off course or was in fact part of an elaborate Mossad covert operation, the psychological effect is the same.

And lethal robotic vultures are a possibility.

The U.S. Army is developing robotic bats that fly autonomously, powered by their own self-recharging lithium batteries. With lifelike outer layers of bat fur and features and the realistic manner they flap their wings, land and perch, these "Com-Bats" can fool real bats, let alone men, all the while transmitting what they see and hear in real-time, from miles away. 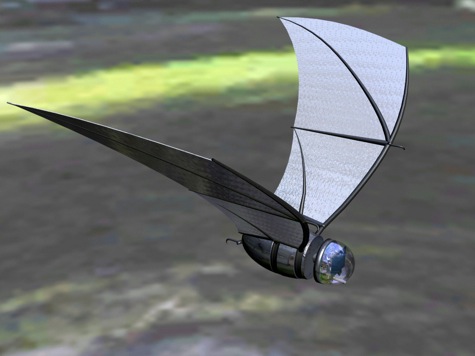 In addition, Israel has made no secret of its fleet of unmanned aerial systems, ranging from the Frisbee-size Mosquito to the Heron, a veritable flying arsenal with a wingspan nearly that of a 737.

As intelligence community wisdom goes: Take an existing unclassified device, imagine it with two decades worth of technological enhancement, and it's not unreasonable to assume that the clandestine service "Toy Makers" have it already.
The Heron
Go To Homepage