Here's my review of Why Romney Lost (And What The GOP Can Do About It) by former George W. Bush speechwriter David Frum.

In a nutshell, the title of this book is deliberate. David Frum argues that President Barack Obama didn't win Tuesday's election as much as former Massachusetts Gov. Mitt Romney lost it. 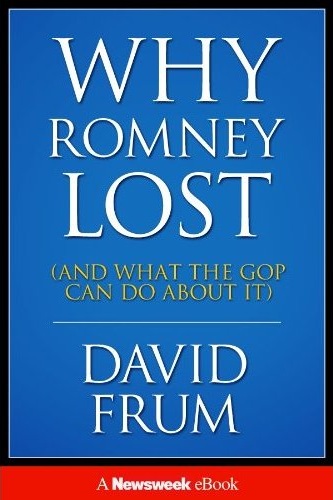 Frum is a 52-year-old Canadian who wrote speeches for George W. Bush about the economy. (He was a Canadian citizen when he joined the administration.) He is also hard to typecast.

But in a 2009 Newsweek column entitled Why Rush Is Wrong, Frum insists his Republican credentials are sincere: "I'm a conservative Republican, have been all my adult life. I volunteered for the Reagan campaign in 1980. I've attended every Republican convention since 1988. I was president of the Federalist Society chapter at my law school, worked on the editorial page of The Wall Street Journal and wrote speeches for President Bush--not the "Read My Lips" Bush, the "Axis of Evil" Bush. I served on the Giuliani campaign in 2008 and voted for John McCain in November. I supported the Iraq War and (although I feel kind of silly about it in retrospect) the impeachment of Bill Clinton. I could go on, but you get the idea."

So back to the book

Frum argues that the Republican party has become the party of "yesterday's America," noting that while the GOP won 5 out of 6 elections from 1968 to 1988 by a comfortable average 5 point margin, since 1988, Republicans have won the majority of the popular vote only once out of 6 presidential elections and then by the slimmest of margins: 50.73%.

Frum notes that while Obama is the most activist and expansionist president since Lyndon Johnson, the congressional Republican leadership made a series of miscalculations that (accurately) portrayed them as weak and ineffectual, including their refusal to work out a compromise on the Affordable Care Act and stalling an increase in the debt ceiling to push Paul Ryan's budget which had zero chance of passing and wouldn't have balanced the budget until 2040.

And while all of this was going on, the GOP's answer to the job crisis was to lower taxes on wealthier Americans while offering nothing to convince middle class Americans they could help them afford college and medical care or even stay in their homes.

With eyes glued to Fox News Channel and ears tuned to talk radio, conservatives were convinced that an African(-American?) in the White House was secretly plotting with Arabs to launch jihad against America. They thought that voters in swing states faced with losing their homes and jobs would vote on Fast and Furious or the lax security at a consulate in Libya.

These are the conservatives Romney was speaking to when he wrote off 47% of Americans he felt were sitting on a couch, waiting for Uncle Sam to feed, clothe, medicate and house them.

Frum goes on to state an incredible array of outrageous comments and characterizations from conservative media flacks that successfully drove a wedge between the GOP and black and Hispanic voters. My personal favorite is the line from Fox & Friends co-host Steve Doocy asking whether the 47% should even be allowed to vote.

Frum observes the irony that "by insisting so emphatically on ferocious, militant ideology, the GOP rewards most those who believe the least, because only cynics and nihilists will make the transition from the real world of governance to the make-believe world of party purity tests."

After observing that the current conservative ideology is completely foreign to the next generation of Americans (and over half of those under 18 are non-white) Frum presents a strong note of caution: "To be a patriot is to love your country as it is. Those who seem to despise half of America will never be trusted to govern any of it. Those who cherish only the country's past will not be entrusted with its future."

Why Romney Lost (And What The GOP Can Do About It) was published in eBook form November 9, 2012. It is available for $3.99 for Amazon Kindle and in the iBook store.