AVENTURA, Fla. ― Senators, protesters and admirers weathered a cold, rainy day in the nation’s capital for the inauguration of President Donald Trump. One thousand miles or so to the south, roughly 120 Democratic donors and dozens of other party insiders retreated to a golf resort to regroup. It was a balmy funeral. Self-styled leaders of “the resistance” sipped cocktails around a heated outdoor pool, debated voter outreach strategies under the chandeliers of a piano bar and listened to hour after hour of presentations about What Went Wrong and how to right it.

The event was organized by David Brock, a longtime Hillary Clinton operative whose various organizations collectively burned through $75 million in the 2016 election cycle only to watch their political patron fall to a reality TV demagogue. In the opening address of the conference at Turnberry Isle Resort, Brock defended both his own work and the direction of the Democratic Party. Trump’s election, he insisted, was a “black swan” event born of James Comey and “traitors inside the FBI.” Democrats should not “over-learn” the lessons behind their loss. Clinton, after all, won the popular vote by 3 million, despite Russian interference ― a grand achievement in the face of the vile sexism of voters who would not accept “one of the most qualified, dedicated, committed, forward-thinking and honorable people to ever seek the presidency of the United States.” Brock didn’t mention her paid speeches to Goldman Sachs.

Brock’s only regret, if it can be called that, was the Clinton campaign’s refusal to follow his advice about Trump’s business record. Republican nominee Mitt Romney was known as a successful businessman before Barack Obama savaged him in 2012 over Cayman Islands investment schemes. A sustained campaign blasting “Don the Con,” Brock said, could have prevented the 2016 Rust Belt wipeout by focusing on Trump’s reliance on cheap foreign labor and his aggressive avoidance of federal tax bills.

“Did Hillary’s own campaign rob her of the only anti-Trump argument that would have opened up the all-important economic issue to her advantage?” Brock asked. “That’s the inescapable conclusion.”

It’s true that Clintonia botched its economic message. But Brock’s broad diagnosis of the Democratic Party’s ailment was so obviously wrong that many of the party elites he invited to speak at his Florida retreat rejected their host’s premise. Multiple speakers talked to reporters about a decade-long slide in state and local party viability, which resulted in the loss of over 900 state legislature seats in the Obama era.

Did Hillary’s own campaign rob her of the only anti-Trump argument that would have opened up the all-important economic issue to her advantage? Democratic political operative David Brock

“I can tell you,” said one insider, “the conversations going on in those rooms are a long way from David’s talk.”

Reporters were not allowed into most of the donor presentations, but many of the speakers spoke frankly to the press afterward about their assessment of the party’s predicament.

“Everyone in that room agrees that absent the Comey letter and absent WikiLeaks, [Clinton] wins,” said Jon Cowan, president of the Third Way think tank. “It’s a close race. But you can’t start from that if you’re going to rebuild the Democratic Party …. Democrats are in their worst electoral position since the Civil War.”

“The challenges that face working people ― and I’m not talking code for white working people but all people trying to survive in a 21st century economy ― [result from being] let down by an approach towards globalization and towards financialization and so forth that can’t be squared,” said Mike Podhorzer, political director at the AFL-CIO, the nation’s largest federation of labor unions. “That has to be acknowledged.”

“Bernie Sanders won the primary in West Virginia,” said Ilyse Hogue, president of NARAL Pro-Choice America. “Bernie Sanders ran on a zero fossil fuels platform in a state that really, really wants its coal jobs back. So there’s a bigger thing at play than just the policy fights that are healthy within a party. And it’s a values proposition, and it’s the way we’re connecting with people from a values perspective.”

The Brock dissenters at the Florida confab have their own differences. Cowan recently raised $20 million for a project to reinvigorate the party by ― many critics suggest ― essentially crushing the Sanders and Elizabeth Warren wing that has effectively assailed Trump’s Cabinet nominees after Clinton’s loss ― a strategy Brock himself ostensibly disavowed in an (admittedly odd) public letter to Sanders.

But some of Brock’s allies aren’t ready to make nice. “Populism is inherently anti-government,” Cowan told Politico. “That works if you’re a right-wing conservative, like Donald Trump. That doesn’t work if you’re the party of government.”

Others rejected the idea that Democrats need to choose between so-called identity politics and economic messaging, arguing that the party needed to work harder to reach working-class voters of all colors. “The Democratic coalition lives in the economy, all right?” former Bill Clinton campaign manager James Carville said. “The idea that somehow it’s only white working-class people that live in an economy and, you know, blacks, Hispanics, unmarried women, gay people ― they’re like everybody else…. That’s an insane argument to have!”

While Brock’s stable of thinkfluencers battled over different visions of a Democratic Party re-think, Brock himself was asking for money to reboot the existing infrastructure. The Democrats got outflanked digitally by the hard right this round, he said. Ramping up funds for the ShareBlue.com space would probably do the trick.

“[ShareBlue] was one of the few places online where Hillary supporters really felt safe,” Brock told reporters. “They developed a narrative that they stuck to for the entire campaign that Hillary was not a victim, but she was an underdog in a society plagued by sexism and media bias. And that might not have worked for the campaign, but it certainly lit up their audience, and people ate it up.”

Other digital media outlets had failed to communicate just how great Hillary Clinton was in 2016, Brock said. “The Huffington Post isn’t what it was.”

The reinvigorated ShareBlue project will be heralded by David Sirota, a deeply respected investigative journalist whose work has forced the resignations of officials in New Jersey and Connecticut. Sirota has cultivated a reputation as a nonpartisan corruption watchdog.

“I think that donors don’t feel that we’re in as bad shape collectively as a party and a movement than what you might read about in the media,” Brock told reporters.

At cocktail receptions and whisper-sessions, Brock’s guests appeared comfortable. But few seemed enthusiastic about Democratic political prospects. And they may have grown accustomed to overpaying.

“It’s a very nice tourist course,” a golf-enthusiast resort guest told HuffPost. “But it’s not worth $300 a round.”

It's The End Of The Democratic Party As We Know It, And David Brock Feels Fine
Mock Jazz Funeral For Lady Liberty 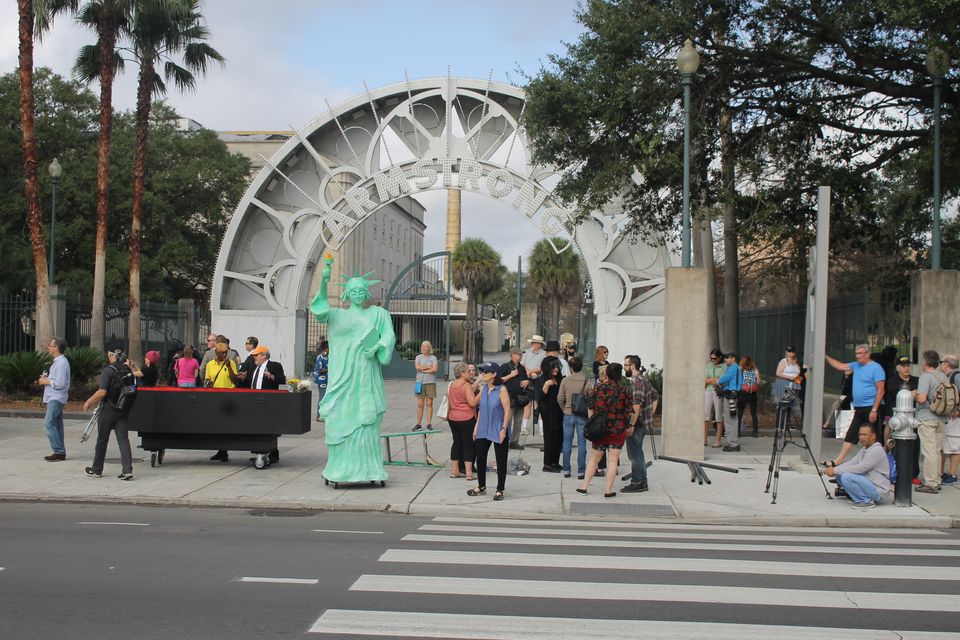