All the fake news unfit to print can be found every day on The Political Garbage Chute.

UNDISCLOSED BUNKER, WYOMING -- Former Vice-President Dick Cheney (R) sent a communique from is Wyoming bunker to incoming Vice-President-Elect Mike Pence (R), offering some "advice, counsel, and training of a unique nature" this week, according to top aides for both men. 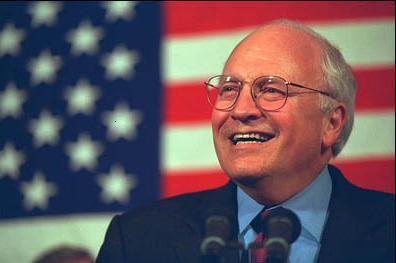 "Mike," Cheney wrote in the cable, "it's come to my attention, watching how your boss has behaved since winning the election last month, that you and I probably have a lot more in common than one would think. Sure, we're both older white guys, but I'm thinking that your time as Vice-President will be much like my time as Vice-President and I think I might be in the unique position to offer you some advice, counsel, and training of a unique nature."

Cheney's letter offered Pence "the chance of a lifetime" to study "the beautiful art form" of puppeteering.

"You might be surprised," Cheney wrote, "just how useful you'll find the beautiful art form. I can teach you how to make it look like the puppet's the one with the ideas, the one who's talking. Then you can just be the stern, almost taciturn figure behind the puppet, validating what he's saying but still at least trying to pass it off like he's the one running the show."

Mr. Cheney, who served in the Reagan and both Bush White Houses, told Pence in his communique that he was convinced he could really help the Indiana governor "assume his rightful, vice-presidential duties" and "lead the nation as only the best puppeteers can."

"We'll study all forms of puppeteering," Cheney wrote, "from Muppet style, which considering the people you've already got in the cabinet should come in very handy. I think I remember seeing Ben Carson on Sesame Street with my grand-robots. But we'll also do a little ventriloquism too, because you've got to be able to make it look like the puppet's speaking, and not you. You can't go to war -- or you know, whatever you want you do -- without mastering ventriloquism, Mike."

Reportedly, Mr. Pence is very interested in Cheney's offer. Reporters were able to catch up to him as he left a D.C.-area doughnut shop. They asked him some questions about Mr. Cheney's cable.

"There is no doubt," Pence said, "that when Americans think of Dick Cheney, they think of him as a puppet master first, Vice-President Second, and Dark Lord of The Sith third. Every American truly loves Dick Cheney. He's a great, honorable man, and has never once told a single, solitary lie. I would be honored to study any subject under his mentorship, but he's absolutely right about my need to master puppetry in the next four years."

To begin his training, Cheney reportedly sent Pence tickets to a show to see, the next time he's got a chance.

"Mike, I read that you went to that show where they put Hamilton in black face or whatever," Cheney wrote, "so I'm sending you tickets to another show I think you'll find quite relevant. Consider it training. This show will have extra special meaning for you, Vice-President Mike Pence, over the next four years, or however long your boss is interested in the job. The show is called Puppetry of the Penis."

Pence and Cheney will begin their puppetry workshop together after Donald Trump is sworn-in as our nation's 45th president.