At the Deepwater Horizon Joint Command press conference last week (June 30) on the toxic studies of Corexit, Paul Anastas, the U.S. Environmental Protection Agency's Assistant Administrator for Research and Development, answered a question from the Associated Press. He said clearly that there was no evidence of dispersants in the air. Here is the relevant portion of a recording of his remarks. (Listen at 1:50)

However, the EPA site which provides real time data for air quality monitoring on the Gulf Coast indicated that from May 18-June 6 "two chemicals found in dispersants" were detected at numerous GPS locations on the Gulf. The data for June 6 can be found here and the data for the other sites is available at the TAGA Route website. The chemicals detected were 2-butoxyethanol and 1-(2-butoxy-1-methylethoxy)-2-propanol. 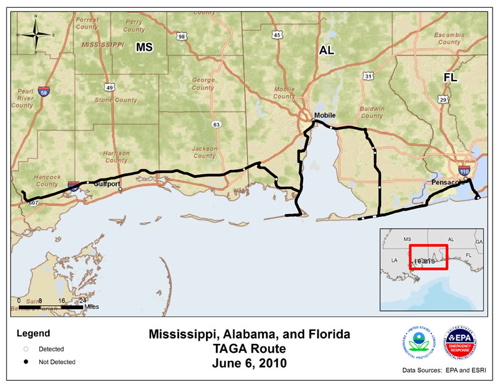 We called the PIO at Deepwater Horizon and asked for a clarification on the discrepancy. Joint Unified Command consists of BP, the Coast Guard, NOAA, CDC, MMS, and the EPA.

Here is our email exchange.

At a press conference on dispersants today, EPA representative Dr. Paul Anastas, the U.S. Environmental Protection Agency's Assistant Administrator for Research and Development, said "no dispersants" have been detected in the air. However, TAGA website says:

EPA's TAGA bus monitors for two chemicals found in the COREXIT dispersants: EGBE (2-butoxyethanol), and dipropylene glycol mono butyl ether, which have the highest potential to get into the air in any significant amounts. EPA has been monitoring for these chemicals since May 18, 2010. The TAGA bus monitors are able to detect and measure these chemicals if they evaporate into the air. The TAGA bus has detected very low levels of these chemicals in the air, at a limited number of the locations sampled along the Gulf Coast. The levels found to date are well below those that are likely to cause health effects.

Can you clarify for me?

I've been informed that the EPA question has to be worked through the EPA PIO in area command in New Orleans and then sent to Washington. I can pass it to them if you'd like for an answer?

We indicated that we would like to have the information forwarded to Washington, but as of this writing there has been no response. I want to make it very clear that the PIO has tried her best to get answers for us.

The most important questions about the potential for long-term heath effects due to exposure to dispersants, such as cancer and nervous system disorders, have not been addressed, although the EPA says it is doing further testing. The problem is that a study of long-term health effects will take years, and the sea life and people living along the Gulf Coast do not have the luxury of time. The wellhead explosion at Mississippi Canyon block 252, took place on April 20; we still do not know much about air quality, and the information we are given is contradictory.

The public's inability to get answers is especially troubling, since more and more information is coming to light regarding the cozy relationship between the Government, the EPA and private industry involved in this catastrophe. The New York Times reported that Nalco Co., the manufacturer of Corexit 9500 hired a former EPA employee as a lobbyist.

The chemical company brought on those lobbyists in March and April to talk to lawmakers about potential environmental regulations. But Nalco now faces a host of new concerns because of its tie to the oil spill cleanup.

According to Source Watch, Ogilvy Government Relations and Ogilvy Public Relations are one and the same.

The firm was acquired by Ogilvy Public Relations Worldwide for $60 million in 2005, and changed its name to Ogilvy Government Relations in early 2007. [1] According to O'Dwyer's PR Daily, the firm decided "to switch its name as the Democrats take control of Congress," adding that "the Republican PR lobbying firm" had "recently made inroads with Democrats as evidence by the December hire of Moses Mercado (former deputy executive director of the Democratic National Committee) and ex-Louisiana Congressman Chris John.

Rawstory reported yesterday (June 5) that the Coast Guard has been involved in spraying Corexit and that it has traveled inland, an allegation that is supported by the TAGA route monitoring.

A marine biologist working with a group of environmentalists to save sea turtles claims the U.S. Coast Guard is involved in spraying a toxic chemical dispersant over the Gulf of Mexico; and he says it has already traveled inland. Pincetich, a marine biologist and toxicologist who works with the Sea Turtle Restoration Project, was speaking to a group of activists who call themselves Project Gulf Impact.

In fact, two days after the press conference announcing the test results on dispersants, "Unified Command" issued a press release directing readers to the CDC website that recommends use of respirators for workers exposed to oil and dispersants.

A summary of studies about the human health effects associated with selected oil tanker disasters can be found in Appendix A. These studies may underestimate the health effects associated with the Deepwater Horizon Response activities since the magnitude and duration of the Response is unprecedented. In addition, there is an incomplete understanding about the human health toxicity associated with the use of large amounts of dispersant, about the toxicity of the mixed exposure to large amounts of crude oil, dispersants and combustion products together and the cumulative effect of such exposures occurring over a long duration.

So, dispersants are clearly present in the air, both over sea and land. If Unified Command is suggesting that oil spill responders might want to reconsider using respirators, why have we been told by the EPA, at a press conference, that there are no dispersants in the air?

Could it be the answer lies in the deep connections between the Coast Guard, the EPA, BP, government lobbyists, and the manufacturer of Corexit?