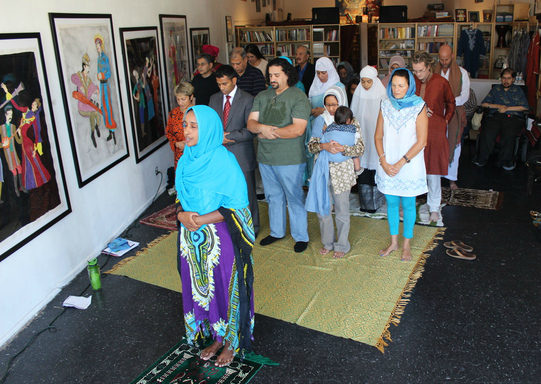 In a recent op-ed, Fareed Zakaria challenged Muslims to counter the bigotry and hate within Islam itself in order to counter those that are directed at Muslims. For the past seven years Muslims for Progressive Values (MPV) has been doing just that. Problem is, we do not get much help from Muslims and non-Muslims alike.

Let us put this to rest once and for all. This is not a struggle between radical Islam and the West. It is between radical Islam and the rest of us, Muslims and non-Muslims. The Muslim people are struggling for their rights, for their freedoms, from tyranny, for freedom of thought and expression -- freedoms the Quran mandated as our God-given right. Freedom is not a Western value. It is a universal value.

MPV is a grassroots organization that started out as a progressive community for American Muslims post 9-11. We advocate for gender equality, women's reproductive rights, LGBTQI rights, freedom of expression (i.e. doing away with Sharia compliance) and freedom of and from belief. Our stance is anchored in sacred text.

Since 2007, our egalitarian expressions of Islam have given birth to six chapters in the U.S. - Los Angeles, Atlanta, D.C., New York, Chicago and Columbus, OH as well as independent affiliates in Canada, France, Chile, Australia and Malaysia and we have connected and stood behind like-minded Muslim partners and friends both here in the U.S., Canada and throughout the world, including in the UK, Brazil and Western Europe.

Recently we reached a milestone by securing a consultative status at the United Nations. This means that our authentic Muslim voice gets to be heard, officially, at the various international United Nations institutions on all the positions we stand for, including our draft resolution that "individual human rights should be upheld regardless of cultural or religious beliefs", language we have proposed to be included for the U.N's post 2015 Millennial Development Goals.

Here in America, both Wahabist Muslims and Right Wing non-Muslims have been our traditional nemesis. The ultra-conservative Muslims spew out Wahabi theology as the purest, and the Christian Right Wing promotes it for political gain. It is disappointing to now have to deal with some Liberals and atheists who essentially promote radical Islam as "the" Islam, because according to them, one cannot possibly be a rational, fair-minded, progressive follower of Islam. We are often told, progressive Muslims are just "not Muslim enough", or we "have not read the Quran, because if we did, we would be killing non-Muslims too."

But we are the Muslims who are taking on atrocities done in the name of Islam, at its roots, with religious language.

ISIL and Al-Qaeda's recruiting magazines are as flashy as Vogue, spewing "religious" language that is "familiar." It is like a dog whistle. You hear it, recognize it and you heed. The question we are asking is, why is this language allowed to be used to spread hatred? Why is Allah, Al Rahman, The Most Merciful not applied? That is the question most conservative Muslim organizations, Mullahs, and clerics will not face.

The tyranny starts with the religious bigotry and Islamic supremacy in Wahabism and Salafism. It has contaminated, corrupted Islam to the point that it is unrecognizable from its origin, from its intended meaning. How did a beautiful Quranic verse found in 49:13 -- "We have created you all out of a male and a female, and have made you into nations and tribes, so that you might come to know one another with affection" be turned into so you may demonize all those outside of one's tribal thinking?

Free thinkers flourished in Islam during our Golden Era while rape and pillage flourished in the Dark Ages of Europe. And what about those free thinkers during Prophet Muhammad's time who converted in and out Islam, in free will without punishment, because the Quran mandates: "There is no compulsion in religion"!

If I was in "moderate" Malaysia, I would be arrested for "deviant teachings". If I was in Saudi Arabia, like Raif Badawi I would be charged with apostasy sentenced to ten years in jail, 700 lashes and fined $250,000. And, just to be sure he doesn't get out, his lawyer Waleed Abu Alkhair too is thrown in jail on bogus charges.

And if I was in ISIL occupied lands, my head would be chopped off.

ISIL and al-Qaeda members are sheep, who kill, rape and rampage in the name of Islam at the command of their earthly god.

Authentically Islamic traditions and much of the Quran commands us to use reason. But the earthly gods of this world forbid we Muslims in the 21st century to do just that, to THINK!

Islam is for thinkers. But alas many Muslim thinkers in the Muslim world are in jail.

So, Mr. Zakaria and all the "experts" of Islam out there, if you honestly want to answer your own question of "why aren't Muslims fighting their own demons", you will have to schlep yourselves over to the jails in Muslim majority countries or to those of us in the West doing the work.

One thing is for sure, compared to the oppressors who sit across from you, we'll give you straight honest answers.