Well into the throes of the first significant post-election policy debate, we're hearing a lot about whether Republicans and Democrats will be able to work together to prevent the country from falling off the fiscal cliff. As the media frenzy wages on, we all hope that both sides of the aisle will recognize the gravity of this moment for our country and the world, and that a deal can be reached based on genuine compromise.

Sequestration means that all federal programs would face across-the-board cuts of 8.2 percent come New Year's Day, unless Congress can agree upon more than $1 trillion in savings. This is a direct result of last year's Budget Control Act that established the congressional "super committee" whose members agreed that sequestration would automatically take effect should they fail to come to an agreement. If there's anything good to be said about this looming threat, it's that it forces us to take a careful look at what we value as a nation. And I personally believe that among the values Americans hold dear, few rival the importance of investments we make to support humanitarian assistance and international development.

Humanitarian assistance and international development programs have played a fundamental role in not just increasing prosperity around the world, but in mitigating conflict and building the foundations of peace, thereby protecting our national security. This was the spirit in which President John F. Kennedy founded the Peace Corps in 1961. With two world wars behind us, Americans recognized the need to maintain a presence abroad and to develop friendships with and forge greater understanding of peoples who live beyond our shores. Today, of course, our nation faces new threats and unprecedented challenges in the international arena. Helping those in need around the world isn't just a good thing to do; it's in our national interest.

Thoughtful leaders from both sides of the political aisle agree that a critical link exists between our national security and the assistance that we provide to struggling countries to reduce poverty, mitigate conflict, spur economic development, help rebuild after disasters, and build self-sufficiency.

Former Secretaries of State, Madeleine Albright, Condoleezza Rice, Henry Kissinger, Colin Powell and George Shultz have all spoken out about the importance of keeping our International Affairs budget strong. [Source: Interaction fact sheet quote] General John Allen, Commander of the International Security Assistance Force in Afghanistan, minced no words when he told Foreign Policy about the long-term value of the "soft power" of development and humanitarian aid: "While the hard power of the military can create trade, space, time, and a viable security environment, the soft power of USAID and the development community can deliver strategic effects and outcomes for decades, affecting generations." 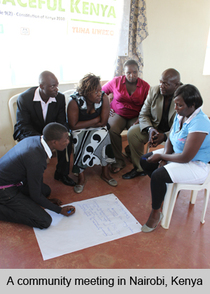 Empowering the poor and vulnerable with the knowledge and tools they need to change the course of their lives is a fundamental element of our approach to development at Global Communities (formerly CHF International). It permeates everything we do, whether we are equipping community leaders in the slums of Nairobi with conflict mitigation skills; assisting those with HIV and AIDS in Colombia to gain access to treatment; or distributing emergency food aid to vulnerable families in Gaza during the recent conflict. Considering the fact that foreign assistance only makes up less than 1 percent of the federal budget, it's hard to make a solid economic argument for cutting programs like these -- programs that reduce poverty and conflict, save lives, and contribute to our national security.

We are certainly not the only ones doing this critical work. Thankfully, many other organizations recognize the need, and through the combined efforts of the international development community, the positive impacts of foreign aid can be seen every day -- in stability as well as sustainability. This work simply must be allowed to continue, especially if we are to continue America's legacy as a champion of peace throughout the world.

And so, as the budget battles wage in Washington, our national leaders must be challenged to put politics aside and remember the values that define us. Not only members of the international development community, but all Americans should stand in support of investments in foreign assistance -- the most important investments we can make toward prosperity and global security.