Tesla Motors' next vehicle will be an SUV, but the company may want to invest in something more like a golf cart.

An essay in the forthcoming May issue of Harvard Business Review upends the theory that the Palo Alto, California-based electric automaker has disrupted the car industry. Rather, golf-cart-like neighborhood electric vehicles, or NEVs, may represent the future of four-wheeled travel, it says. 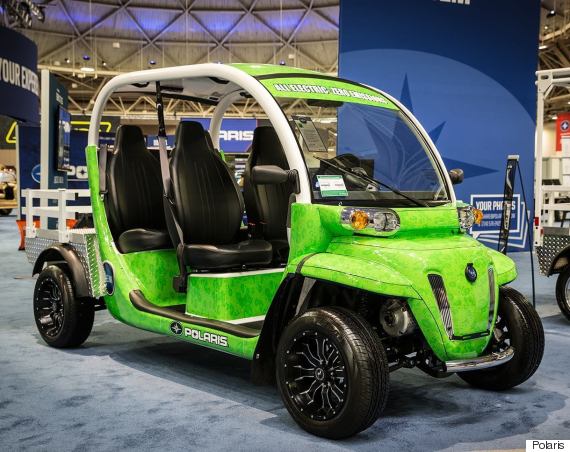 Where Tesla's cars are expensive, going for upward of $100,000, NEVs sell for as little as $8,000. The auto industry proved to be resilient to disruption, as Tesla's competitors, including BMW, Mercedes-Benz and General Motors, have begun to aggressively compete with their electric cars. Whereas Tesla created a luxury vehicle that mimics the experience of a gas-fueled car, NEVs serve a different purpose altogether -- providing cheap local transportation. And as personal car ownership declines, NEVs appear to be a viable option for future pay-per-ride services that would rely on fleets of personal electric cars to shuttle passengers around cities.

That isn't to say Tesla doesn't play a crucial part in pushing the auto industry toward all-electric and self-driving vehicles. But as more people use ride-sharing services instead of buying cars, NEVs are positioned to dominate the auto industry.

"Personal transportation will be a combination of Uber and autonomous vehicles," Karl Brauer, senior analyst at the automotive research firm Kelley Blue Book, told The Huffington Post on Thursday. "Ultimately, small electric cars will be the primary form of transportation in urban areas."

Earlier this week, Morgan Stanley auto analyst Adam Jonas published a chart that outlined the future of driving. Though he provided no timeline for the evolution, he predicted that huge fleets of electric, autonomous vehicles will eventually become the norm, replacing the need for personal car ownership.

Essentially, whenever you need a ride, you'll summon a robotic vehicle -- much in the way people hail a Lyft or Uber driver through a phone app -- and it will transport you from place to place. It may even make other forms of public transportation, such as subways, obsolete.

NEVs are perfect for the job, Brauer said. 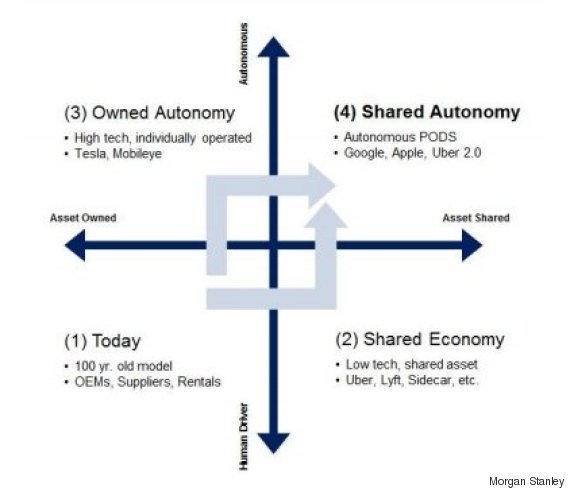 All arrows lead to quadrant four, where no one owns cars. They just summon them from a publicly or privately owned mega fleet.

It makes sense. As it is, the average person uses his car for only one hour a day, according to a still-widely cited 1995 statistic from the U.S. Department of Transportation. And driving by U.S. household fell nearly 10 percent between 2004 and 2014, marking the first major shift in car ownership since World War II.

"Whenever I need a car it'd be there for me and do what I need it to do, but when I didn't need it, it wouldn't cost me anything or take up any of my space. That sounds great," Brauer said. "And I'm a car guy."

Big carmakers have yet to start making NEVs. Polaris Industries, known for its all-terrain vehicles and snowmobiles, has emerged as a leading manufacturer.

For now, NEVs are largely limited to enclosed areas, such as college campuses or factories. Most cannot go faster than 35 miles per hour and are therefore barred from using many roads. But, with time, they may replace personal cars.

"It's not going to happen overnight," John O'Dell, senior editor at the car-shopping site Edmunds.com, told HuffPost. "But it will probably be a thing that happens, especially in urban areas."