WASHINGTON -- While many Republicans in Congress deny that man-made climate change is occurring and oppose regulations to address it, a new survey suggests that Republicans in the rest of the country are more inclined to believe in the phenomenon and to support environmental protection.

There is a wide split on global warming among Republican voters, according to a survey released on Monday from the Yale Project on Climate Change Communication. A strong majority of respondents who identify as “liberal Republicans” believe global warming is happening -- 68 percent -- as do 62 percent of moderate Republicans.

But those numbers plummet to 38 percent among conservative Republicans and to 29 percent among self-identified “tea party” Republicans. And since many more respondents said they identified with those latter two categories, overall only 44 percent of Republicans who participated in the study believe global warming is occurring. 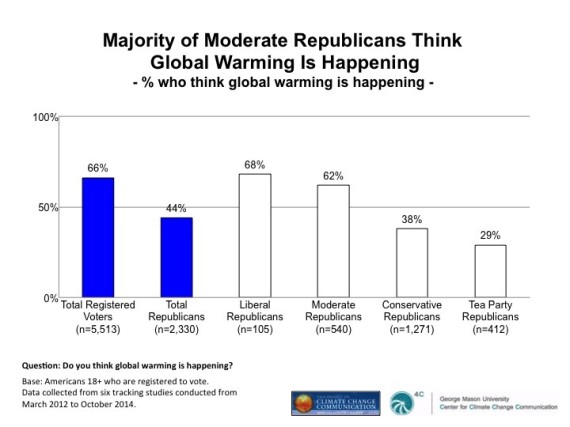 The results were similar on the question of setting regulatory limits on greenhouse gas emissions for existing coal-fired power plants, with 73 percent of liberal Republicans and 62 percent of moderates in support. A comparable gap existed between those groups and the more conservative respondents, with only 40 percent of conservatives and 23 percent of tea party Republicans supporting such limits. 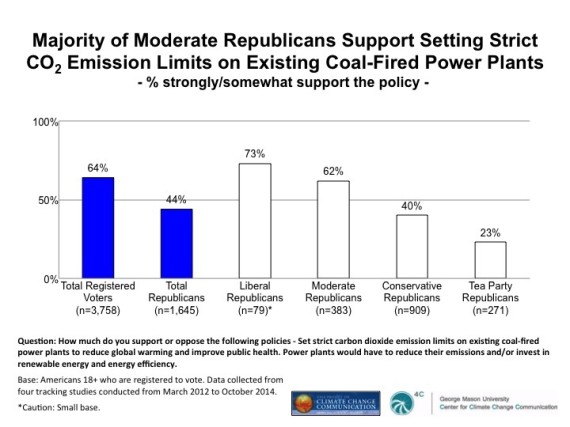 The survey results were compiled from six national surveys conducted between March 2012 and October 2014.

“What we’re seeing now is a real struggle within the Republican Party to define its stance about climate change,” said Anthony Leiserowitz, director of the Yale Project on Climate Change Communication, in an interview with The Huffington Post.

Leiserowitz noted that there has been a shift within the GOP on these issues. “It was only a few years ago when their nominee for president, John McCain, was one of the principal architects and pioneers promoting climate change legislation in the Senate,” he said. “Then by the [2014] midterms, the Republicans were all adopting this talking point of ‘I’m not a scientist.’”

The findings come at a contentious period for environmental policy in Washington. The House of Representatives last week voted to approve construction of the Keystone XL pipeline over President Barack Obama’s veto threat, and the Senate is expected to pass its own bill next week. And while the Environmental Protection Agency is working to finalize new limits on greenhouse gas emissions from new and existing power plants, Republican leaders in Congress have indicated they will try to block the rules from taking effect.

Even with these most recent survey findings, Leiserowitz said he doubts there is any realistic possibility that GOP leadership will change its tune on climate rules anytime soon. “National climate legislation is highly unlikely,” he said. “It’s not going to happen.”

But Leiserowitz said there might be opportunities to advance policy measures that address greenhouse gas emissions without using the term “climate change.” He pointed to Republican interest in raising the gas tax, especially if it’s revenue neutral or if the revenue is used to pay down the national debt. Prominent Republicans including Senate Environment and Public Works Chair Jim Inhofe (R-Okla.), Senate Finance Chairman Orrin Hatch (R-Utah), and the third-ranking Senate Republican, John Thune (R-S.D.), have expressed openness to the idea.

While the Yale survey did not address the gas tax, it indicated potential Republican approval of other policy measures, such as tax rebates for those who buy solar panels or energy-efficient automobiles. Sixty-four percent of Republicans supported the tax breaks, including 63 percent of self-identified conservatives.