By this point in 1984, “Star Wars” was pretty much dead. George Lucas was still talking about the prequels, but he made it clear that they wouldn’t be released anytime soon. (Lucas, at one point, said that he wanted to take two years off, then start production on “Episode I,” with an eventual release date of 1988. “Episode I” was finally released in 1999.) Children of that era (ahem) were already so scattershot with their attention spans, that they had moved on to G.I. Joe and Transformers for entertainment. By 1985, "Power of the Force"-labeled “Star Wars” action figures warmed retail-store pegs. (Which, today, are some of the most valuable because absolutely nobody bought them at the time.)

Nineteen Eighty-Four marked what would become the death throes for action-adventure movies set in space. There had been a flood of lesser movies trying to capitalize on the tone set by the original “Star Wars” trilogy: there was “Krull,” "The Last Starfighter,” “Megaforce,” and even a little-known gem that tried to capitalize on both “Star Wars” and “Raiders of the Lost Ark,” titled, of course, “Space Raiders.”

And, front and center, waving its space herpes-infected death rattle, was “The Ice Pirates,” which turns 30 years old on Sunday.

“The Ice Pirates” remains a bit of an anomaly today. In an age of unabashed nostalgia for anything, “The Ice Pirates” is largely unmentioned and unloved. Which is odd because “The Ice Pirates” was extremely popular with the 9 year olds of 1984. (I speak from experience.) Before I re-watched “The Ice Pirates” this week, the only thing I really remembered was a machine that would slice off a person’s scrotum with big chomping teeth (in fourth grade, this scene was discussed with an almost unhealthy resolve). 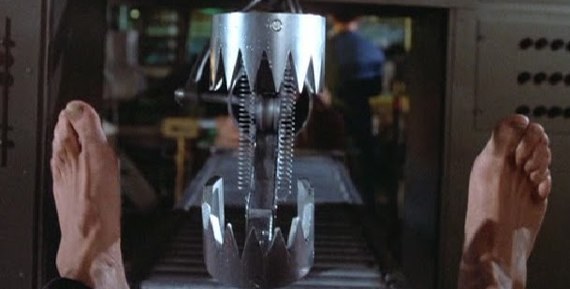 Having now re-watched “The Ice Pirates” –- and now being the same age that my father was when he took me to see "The Ice Pirates" –- a lot of things about my relationship with my father, as it pertains to our personal tastes concerning popular culture, makes a lot more sense now.

The first movie my parents ever took me to see in a theater was “The Empire Strikes Back.” The next year, in 1981, they took me to see a re-release of the original “Star Wars.” I know my father wasn’t a particular fan of “Star Wars,” but he tolerated it because they are genuinely entertaining movies. It’s when “The Last Starfighter” and “The Ice Pirates" came along -- movies that he, like so many others, thought were garbage -- that my father checked out. “The Ice Pirates” is a movie that only a 9-year-old could like –- and that’s why these types of movies died. (And, really, 9 year olds didn’t like “The Ice Pirates” -– they just liked that it reminded them of “Star Wars.”)

In 1977, space movies were getting nominated for Best Picture at the Academy Awards. By 1984, “space movies” were dumb.

Like I said, I re-watched “The Ice Pirates” and, hoo boy, what a weird thing. The gist is a band of pirates –- led by Robert Urich as Jason (doing his best Han Solo impression), along with fellow pirates that include Anjelica Huston and Ron Perlman –- comb the galaxy looking for water. Okay! Not a bad premise! But Jason's pirates actually wear pirate costumes. And they have swords. Not laser swords, but just regular swords. In space.

Love scene dialogue includes gems like Jason saying, “I should take my saber off.” The princess (Mary Crosby) responds, “Let me. You’re so stiff. The belt, I mean.” (This is such a perfect euphemism because, if belts are known for anything, it’s being stiff?)

“The Ice Pirates” ends with (I swear I am not making this up) an elaborate fight scene as their spaceship travels through a time warp. The time warp causes all of the characters to age so much that, during this fight, Jason’s son is conceived, born, becomes an adult, and literally swoops in to save a now-elderly Jason. Oh, and Bruce Vilanch shows up.

(I should take a moment to point out that the director of “The Ice Pirates” is Stewart Raffill, the same man who directed “Mac and Me” and has supplied Paul Rudd with a lifetime of talk-show movie clips. So, Raffill can take full credit for restoring the “cute and nice alien” movie trend, too.)

The thing is, I don’t think anyone involved in “The Ice Pirates” really took it that seriously in the first place. It’s just bad timing that it came out when it did – followed by the slightly more serious, but still fun “The Last Starfighter -- because there really was a real opportunity to create new action-adventure stories that were set in space. It just so happened that no one quite knew how to pounce on the opening left by “Star Wars.” (I am not forgetting the “Star Trek” movies, but those already had an established fan base before “Star Wars” and, with the exception of “Star Trek IV: The Voyage Home,” kind of lived in their own insular world.)

That’s not to say there wasn’t sci-fi, but the space adventures in theaters seemed, for all purposes, dead. Now, television picked up the slack. So much, in fact -– with shows like “Firefly” and “Battlestar Galactica -- that you may not even realize the dearth (other than the “Star Wars” prequels and “Star Trek” movies) that was levied upon the space opera.

In the last year, things have changed dramatically. It’s easy to point at “Gravity” as a turning point for these types of movies. And it certainly helps, but its action still occurs pretty close to Earth and -– as unbelievable as some scenes may actually be –- it’s still based in at least some sort of hyper-stylized version of reality.

The real test is Marvel’s “Guardians of the Galaxy.” Sort of. I mean, it is the very definition of the kind of action-adventure movie this entire piece has been about, but it’s also a Marvel movie set in the current “Iron Man,” “Thor,” Captain America,” “Avengers” timeline. So, even if a person were not normally going to see “Guardians of the Galaxy” movie, they’re probably going to think, Well, it’s a sequel to “Captain America: The Winter Soldier,” so I need to see it. It’s a test, but the true test comes for whatever, if anything, tries to follow “Guardians” (not counting “Star Wars: Episode VII”).

Whatever it is, let’s just hope it’s not a remake of “The Ice Pirates” ... I’ve seen enough scrotum-chomp machines for a lifetime.