After a gunman killed nine people at a church in Charleston, South Carolina, last week, many Americans turned to Google for information. And a lot of them wanted to know about gun control.

Google has released data on how Search users reacted to the violence on June 17. Its newly revamped Trends tool has a rundown of the kinds of topics people queried the search engine about in the days after the tragedy. One of the most interesting things the data show is that searches for "gun control" surpassed those for "gun shop" across the United States.

Searches for "gun shop" are usually more popular than "gun control," according to data Google Trends averaged from the past year. But in the 72 hours following the Charleston shooting, "gun control" was the more popular search term in 45 states. 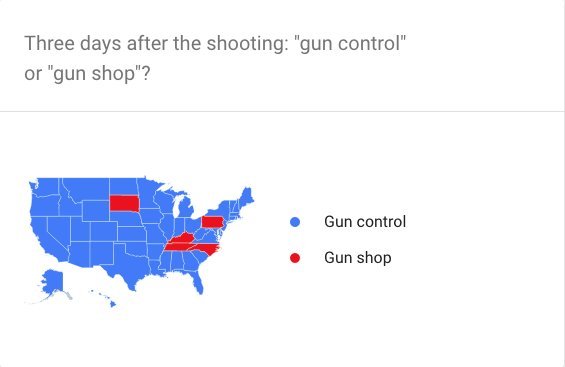 And here's what search data for these two terms looked like over the course of last year: 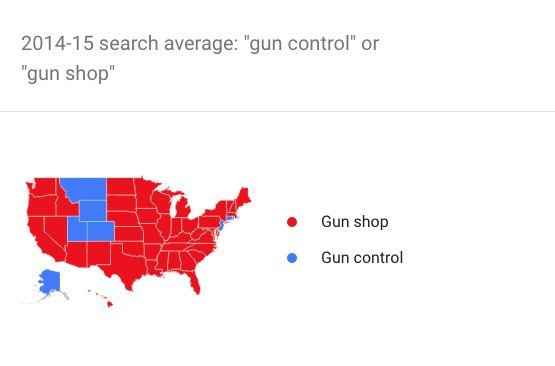 It's important to note, of course, that Google Search data do not necessarily reflect shifting attitudes toward gun ownership. However, A HuffPost-YouGov poll conducted shortly after the mass shooting in Charleston showed that 49 percent of Americans believe now is the right time to discuss stricter gun control measures, versus 37 percent who think it's the wrong time.

An earlier Pew report from December 2014 found that more people felt that protecting the rights of gun owners was more important than gun control, with 52 percent of respondents preferring the former.

President Barack Obama on June 19 addressed the Charleston tragedy and spoke about the country's need for better gun laws, saying, "It is not good enough simply to show sympathy. You don't see murder on this kind of scale with this kind of frequency in any other advanced nation on Earth."

This article has been updated with additional information about an earlier Pew survey.