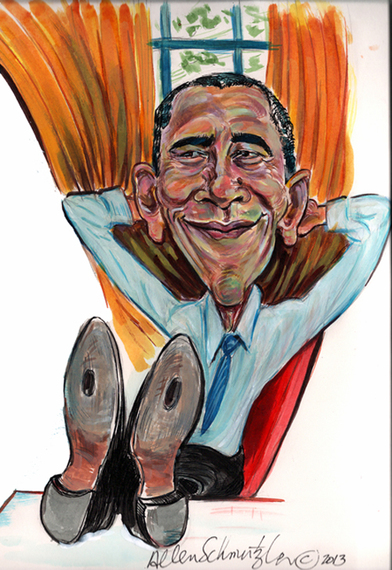 Remember a few years back, during the middle blur of the many dark years post 2010 when your Presidency looked terminal, your ratings tanked, and the Repugnacons thought they had you marginalized into inertia and suppressed by their "make-you-fail" ground game. But you were steady, relentless and self-less. Look who is left and laughing. You wore holes in your shoes without wearing out your welcome.

Look who us Americans are lamenting over not having another term in office. This is an amazing and shocking turn of events. It was totally unpredicted. Before the country gets caught up in anticipating the next inauguration, we just needed to thank you before you turn out the lights and turn over your keys. (Can you maybe hide a key in your shoe?) You and your family restored honor, dignity and color to the White House. America has a First Family, again. The world loves you, too.

We are better off now, way better off than eight years ago. We learned about when President Bill Clinton left, he also had the last laugh. His enemies were diminished and humorless. Many became grumpy older men. Fascinating how some have tried to grab power again by attaching themselves as surrogates to Donald Trump. I guess they never got over it.

Mr. President, could you please chat with Newt, we are worried about him. He may not make it through his worst nightmare, another eight years of Clintons. Although they seem to have a strong faith, Rudy, Christie, Mitch and McCain may also be in trouble, perhaps you can counsel them as well. But don't bother with Donald, even we lowly ones can see how beyond help he is. We trust your judgment.

Thank you again Mr. President. You earned American's affection, admiration and will exit as a popular icon destined to swell the history books with accolades. You are a transformational figure. You have forever altered the White House, for the better. You kept scandal, pessimism, and political nastiness out of the White House, just as you promised. Change we can believe in. You leave office empowered while your enemies have been marginalized, terribly diminished, crippled by their own dark forces of inertia, ineptitude, vindictiveness, hate, and visionless vitriol.

Thank you, Mr. President for getting stuff done, in your "no drama Obama" way. So you know, we have your back Mr. President. Hillary, your hand picked successor to protect and enlarge your legacy is going to win and become the first woman President, and she will keep the creeps who secretly hate the real America "honest." Or, she will at least keep them feeding on their own while they try to figure out what it means to be an elected servant for the people. Wow, it is true, he who is left, lasts. He who laughs last, lasts.

Sincerely and Respectfully yours,
The Americans Fox News Dissed