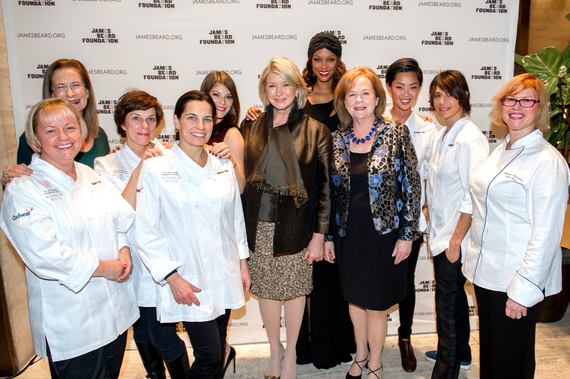 "I thought it was rather exclusionary," Martha Stewart paused, her eyes narrowed slightly, "I think they wanted people to react."

She was referring to TIME Magazine's "Gods of Food" cover story (Nov. 18), which controversially failed to include a single female chef. An accompanying all-male family tree chart of culinary influencers sparked outrage. Martha Stewart had a point; when TIME editor Howard Chua-Eoan employed the term "bromance" to describe the food world's most powerful chefs, the food world reacted.

Martha Stewart (Martha Stewart Living Omnimedia) Tyra Banks (The Tyra Banks Company; and creator of America's Next Top Model) and Gail Simmons (Top Chef) were honorary Event Chairs at the James Beard Foundation's "Women in Whites" gala held Friday, November 15th at the Four Seasons Restaurant in New York City. The theme of the foundation's annual fundraiser celebrated the accomplishments of women in the culinary industry with a multi-course feast prepared by some of the country's most successful female toques.

"The article" was the event's prime topic of discussion, following a weeklong media storm of accolades and reactions invoking the food world's female pantheon.

Eater.com reporter Hillary Dixler took Chua-Eoan to task with a brilliant, searing interview asking why no women made TIME's "Gods of Food" list. Chua-Eoan responded, "The female chef is a relatively recent phenomenon." He faulted the "network of women" for its weakness, explaining, "When you look at this chart it's very clear. It's all men because men still take care of themselves. The women really need someone -- if not men, themselves actually -- to sort of take care of each other."

Perhaps Howard Chua-Eoan's "Gods of Food" did for the culinary world what Miley Cyrus' MTV VMA performance did for twerking; it may not have been pretty, but it got everyone talking.

In her speech at Women in Whites, Tyra Banks mentioned "the article" and a howl erupted in the dining room. "I am a contemporary feminist," she expressed, "Yes, I modeled. Yes, I have a competition about modeling, but there's something inside of me that burns about the empowerment of women and the equality of women."

Banks went on to discuss stereotypes and the influence of women, specifically mothers, on the world of food. "Why is that not translating into chefs?" she asked, "and into being highlighted and lauded and heralded like men? I think tonight is a wonderful, beautiful night to start this conversation on a grand scale."

The conversation itself isn't new, but it succeeds in highlighting organizations like the Beard Foundation, whose primary mission is to "celebrate, nurture and honor America's diverse culinary heritage through programs that educate and inspire."

The foundation's president, Susan Ungaro, one of the food world's most influential women in her own right, expressed her concerns to me. "What really worries me as President of the James Beard Foundation, is that we want to make sure to recognize the total of all the diversity in the food world, not just gender but ethnic diversity, and that's two challenges in the food world not unlike the Fortune 500 business world."

Since Ungaro assumed leadership of the foundation in 2006, she has made strides in raising gender awareness, with a focus on Women in Food in 2009 and launching a Women in Culinary Leadership Program in 2012.

Ungaro maintained she is simply upholding the work set out by the foundation and by Beard himself, a resolute champion of women.

"He mentored some of the most important culinary goddesses of our times if you think about it - Julia Child, MFK Fisher, Alice Waters, Madeleine Kamman," names glaringly absent from TIME Magazine's list.

"I'm really proud of the fact that our foundation has been doing whatever we can to celebrate the talents, trends and the women who really matter in our food world: the chefs, the restaurateurs, and even the cookbook authors and journalists who are doing incredible work."

Of the women honored Friday night, four have won James Beard awards, also known as the "Oscars of the Food World." Melissa Kelly of Primo Restaurant in Maine is the only chef to have won two, as "Best Chef in the Northeast" in 1999 and 2013.

One of the evening's most accomplished honorees is Barbara Lynch, a multi-award-winning chef and restaurateur who maintains an empire of eight successful businesses and a foundation based in Boston, someone who Howard Chua-Eoan claimed (in his interview with Eater.com) is not culturally relevant.

In a follow-up piece, TIME reached out to Chef Lynch, who suggested the "Gods of Food" made her rethink her views on celebrity chefs.

"I used to think the fame part was a pain in the ass. I thought it took too much and it was too phony. Now I will grasp the fame and the public image because I think I can inspire people."

Chef Lynch spoke to me while prepping the dough for her white truffle gnocchi and lobster course. "Half the men wouldn't be able to do what we do. They don't know how to multitask, they just don't. And it's all about - a lot of it's about ego and I don't want to sound like an asshole, but it is. Women are just more nurturing. It's our nature."

"What I don't understand," she continued, "is that if you are so huge and in the press, then f-ing educate. Don't judge. Educate people. You want to go on television shows? You want to f-ing judge people? I would love to see them do half the things they make these little, young chefs do that just - you know, don't have these experiences they have, and then they judge them."

Chef Lynch's latter statements are directed at TV competitions like Top Chef, a show her own prodigy, Chef Kristen Kish, recently won. Kish is Chef de Cuisine in Lynch's fine dining Boston restaurant, Menton, and another of the event's superstars. As the second-ever female Top Chef, Kish is no stranger to the chef-as-rock star mentality.

"Regardless if I were on Top Chef or not, I would've reacted probably the same way as the majority of the public reacted," said Kish, "I don't want to say too many crass words, but I read it on an airplane and I was like, "What the f--?" I mean, this shit's going to happen. It's nothing that we haven't heard before. An event like [Women in Whites] showcases the fact that they don't know what they're talking about. Anything that brings up a little chatter is always great. At the end of the day, we're chefs, right? I just want to be happy. I want to cook and cook and cook. Drama is drama, I just stay out of it."

Chef Dominique Crenn (Atelier Crenn, San Francisco) welcomed the controversy. She joked to the event's diners that maybe it was all just a conspiracy; that a woman was really behind the TIME article.

"I think it's a good thing the article happened because now there's a conversation that he's started. " Crenn tells me, "Let's move forward and let's start to do things about it."

The first woman in the U.S. to receive two Michelin Stars, Chef Crenn is an outspoken supporter of equality in the kitchen. In February 2013, she gave a TedX talk that addressed the gender imbalance in the culinary industry.

For Crenn, the TIME article is a call to action.

"I think he gave us a favor. I think it's a wake up. Let's find the balance and work together as one. And I think the great thing...is this is a platform. And I want to use this platform to be able to inspire and be inspired. It's not about me. It's like, hey, I [have] a voice, what can I do with my voice? And I want to use it in a very good way."