For years I have been reading about Assata Shakur. I read newspaper articles; I watched discussions about her on Democracy Now! and other radical news outlets; I'd seen her name emblazoned on shirts, and some of my favorite revolutionaries quote her. Last week, I finally picked up her autobiography. I couldn't put it down.

Assata has come into my life at a very important moment. I needed her words. Her words poured like honey over my soul. She refreshed me and gave me an odd sense of hope for the future. It is odd that at this moment, the moment when the bounty on her head has been raised to 2 million dollars, at this moment when there are renewed cries for her capture, and unrest across the nation, and around the world, that I am soothed.

Assata talks a lot about strategy, history, and education. The reality is that none of us are safe. Her story, and the stories of other political prisoners, like those captured during the green scare, is proof that no matter how clean we keep our noses, we are at risk from the government. Even if we focus on educating children and healing our communities, like Assata, if we stand up for what is right we are at risk of being framed, tortured and potentially killed.

This sounds like a disappointing realization. Many people reading this are probably thinking that I have gone off my rocker. The soothing words are that "we can be radical." Assata doesn't say this outright but if you believe and understand her story this is a key truth. If you can be framed for crimes that there is no physical way you could commit. If the truth is out about how there is no way you could commit the crime. If after more than 30 years, and under the governance of a black president, and a black attorney general Assata is considered a threat more today than 30 years ago. Then, in these realizations there is a freedom. The freedom is that when you have nothing to fear, because there is everything to fear, then you are free to be yourself. There is nothing to fear because you clearly can't control the government, and the government can frame anyone.

Assata says, "One of the most important things the Black Panther party did was to make it really clear who the enemy was: not the white people, but the capitalistic, imperialistic oppressors." This is what I love about this current moment as well. We have different struggles, but we often share a common enemy. The enemy is the system that is oppressing so many of us. Yes, there are white trans people who oppress people of color. There are gay people who don't fight for the rights of women or poor people. And yes, there are some black straight people who silence queer women's voices. But we are all fighting the same system. 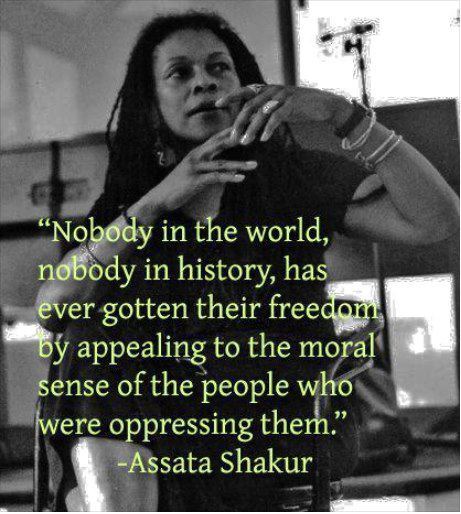 Many of my white friends have been asking me why am I being so vocal about this "black lives matter stuff?" One reason is that I am human and I truly believe that an injury to one is an injury to all. Also though, as Assata says, "any community seriously concerned with its own freedom has to be concerned about other peoples' freedom as well." When she said this, she was talking about black revolutionaries in the U.S. caring about black people in the rest of the world. She sums it up so well though. This is why I care. Why I stand up for black lives, for Palestinian lives, for trans sex worker lives in Uganda, and everywhere.

I know that it can be exhausting to hang out with me. I'm passionate and I love to dive deep into conversation about issues. I'm vocal and blunt. I sometimes seem immovable in my opinions. I look for people to engage with me in discussions about oppression, and I want to brainstorm ideas on fighting this oppressive system based in straight cis white supremacy. This is just how I am wired.

I have a hard time understanding how people can continue shopping and celebrating a pagan festival stolen by christians that is now just about buying shit -- when black people are being murdered daily by the people who are charged with guarding the goods that everyone is trying to buy. I have a hard time understanding how anyone can turn the channel, when the U.S. is killing people in Pakistan with remote controlled weapons. I can't comprehend how people can walk by when trans women are being beaten or harassed. I can't fathom how people can stand by when women are catcalled, assaulted, and raped. How can you ignore what is happening?

Ignorance and silence are violence to those around us.

The U.S. prison system, the largest in the world, is primarily black lives. Paid in pennies, people living in prison make not just the license plates that mark our cars but Mother Jones reported in 2008 that inmates make everything from office furniture to shrink wrapping products for tech companies. Caroline Winter from Mother Jones said, "Texas inmates produce brooms and brushes, bedding and mattresses, toilets, sinks, showers, and bullwhips." Yes, bullwhips! Maya Schenwar for Truthout reported that thousands of prisoners at the maximum security Louisiana State Penitentiary, otherwise known as Angola, pick cotton, wheat, soybeans and corn, while armed guards, mostly white, ride up and down the rows on horseback, keeping watch. Yes, black inmates are picking cotton in the US being paid pennies while white people guard them, in the 21st century.

But justin, why don't people just vote to change things? Why does anyone need to march, or occupy space, or use other revolutionary tactics? Because if you believe that voting does something, think about who can vote. If you have a felony on your record you cannot vote. Washington Post reporter Max Ehrenfreund reported in August 2014, that roughly 24 percent of African-Americans in Missouri have been convicted of a felony. And what if you don't have ID? Increasingly you need government issued identification to vote. Eric Holder said in a 2012 speech to the NAACP convention in Houston "recent studies show 25 percent of African Americans, 8 percent of whites lack government-issued photo IDs." Furthermore, if you work more than one job when are you supposed to go to the polls, especially if they move them further from your house - early voting is being cut back yearly. And don't get me started on running for office and how much money that requires these days.

We need to wake up as a nation. Assata reminds us, not just for our own liberation, but also for the liberation of all people. I fight for the day that all people are free. I don't fight for democracy but for freedom. An international focus is especially important in our current world, more than Assata could have imagined in 1984 when she wrote her book. It is imperative that we fight for the workers who make our clothes in Bangladesh, grow our food in Mexico, and put together our technology in China. We can no longer put this off.

My boss jokes that my favorite word is intersectionality. It is not my favorite word but it is a damn good one. However, you can't just throw it around. It means that the struggle is interconnected. If you fight from an intersectional focus you have a lot of work to do. It's not just that race, class, gender and sexuality are connected, intersectionality includes a global outlook. It is a fight that also needs to be framed in climate justice. The world's poor will suffer the effects of climate change first, which is mostly people of color, and if you really believe that climate change is real... in the end, the earth will be too hot to sustain life, all life.

I realize that this stream of consciousness started off with me saying that I have hope and now, as I near the end, this is sounding pretty depressing. We have a lot work to do. We all need to be in the fight together. That doesn't mean that everyone needs to be in the streets, there are many ways to join the revolution. I am hopeful because I work with young adults, and they are not just talking anymore. The youth of our world are acting; they are organizing for social change. They are organizing from an intersectional framework. The youth of Palestine are connecting with the young adults in Ferguson. And they are realizing that they can be radical.

As I ring in a new year I commit to continuing to listen, to act, to learn, and to speak. I implore you to join me. Stand up, stand with, walk alongside, and speak up. It is not going to be easy, but together we can change the world.

Image of Assata from: Frontlines of Revolutionary Struggle