A few years ago my son traded in his Wii for a PlayStation3. While he was stepping up to higher resolution imagery, I was stepping down to crappier fitness.

Wii Fit, with its robotic, incessant, perfectly-sculpted instructors, had kept me in line since we'd moved and left the home gym behind. Without those memes and their beady little eyes insisting daily that I step on the board so they could monitor my every move, tighten my torso and do five more, I pretty much relaxed my stance, my form and my stamina. Gone was accountability. I was left to the honor system to go for the burn. I leaned more to the chill. My body reflected my relaxed workout. "The change" didn't help either -- with the temperature or my evolving form.

Where once I could watch my calories and fat for a few days and drop five, now I could cleanse for a week, lose that five and gain it back with the first grapefruit. OK, so there were also six pieces of Mozza pizza involved. I was starving, dammit!

Last month, we became the last household in America to make the transition to a flat screen TV while retaining an ancient Marantz receiver, a non Blu-ray DVD/CD player and a VCR (Kidding. Kind of. It's hooked up to the 19-inch picture tube TV in my bedroom). It required a major effort to get the old gazillion-pound Sony dinosaur to the recycler and then get the resurrected vintage components rewired. As a single mom, I hired a highly-skilled techno geek who ever-so-gently and barely condescendingly encouraged me to upgrade to sleeker, superior, this century stuff. Oh yeah? I countered by adding the old Wii Fit to the mix.

Modern day flat screens aren't built for history. With a sigh, tech geek recommended an adapter for hooking up the archaic deal to our new TV technology. I waited a week for it to arrive, but then I couldn't get it to work. Nor could my gizmo-savvy kids. I waited another week for said geek to get back to us. Hurry! I can feel my hips widening.

I had tried everything I could think of within minimal effort to fit up. No longer recognizing the girl in the mirror, desperate to regain the figure I'd complained about for years, I was certain the Wii Fit would be my salvation.

Tech geek finally arrived and spent two hours futzing before realizing that the adapter was bogus and an alternate plan was required. I paced like a cougar in heat.

He came up with a plan and offered me a choice. He could either unhook the old DVD player, forcing me to learn to use the PS3 to play movies (yeah, sure, that's gonna happen), or forgo the Wii. I opted for stupid and slim.

Tech geek worked swiftly now as it neared 11. I pulled out the balance board, discovering the battery compartment more corroded than Pamela Anderson's latest marriage.

He instructed me to make a solution of warm water and baking soda as I hacked away at the hardened mess with a steak knife in the other room. Shamefully, I complied as he left and I spent the next hour dabbing away at the rancid battery acid with a Q-tip.

It was after midnight when I finished and set the board down for a test run. The light wouldn't stay on. What?!? I spent the next hour in a sweat, insanely rearranging the batteries. Again and again and again. I must have burned at least 20 calories right there. Despondent that I couldn't get the thing to stay lit, I spent another hour Googling balance board replacements and plotting the best strategy and price. Pissed that our board was shit from neglect -- it's not a frickin' puppy or anything -- by chance, I ran across the online manual. The word "synch" jumped out at me. It has to be synched. Aha! I pushed the synch button on the thing. Nope. I did it again and again and again. Nope. Oh... wait... maybe I have to push something on the console. Yes! That's the ticket.

I spent another hour messing with that. It still wasn't working. Finally, I decided to read the damn online manual. The machine has to be on. Oh. And, I have to push start. Whaddya know. Four hours in, it was almost too much to hope for.

Success! By then it was 3 a.m. and I was too exhausted to work out.

The next morning I hopped aboard. Literally. A meme welcomed me back and told me it had been a while since my last workout. I could feel his disdain. But better the damn meme than the righteous bitches at Weight Watchers.

He noted that I'd gained two and three-quarter pounds in the intervening years. He couldn't see that the four pounds of clothing I'd reported wearing were approximately a three pound exaggeration. Oh, the advantage of the fake virtual world!

After a couple of assessment tests he told me that my BMI was up, and my Wii fit age almost caught my real one, which depressed me almost as much as my first attempt to keep the ball in the center of the yellow circle.

I chose the hot young male instructor and almost immediately regretted the decision. He spent the next hour and 38 minutes showing off and silently judging me while pretending to be encouraging. What a shit actor. He'll never win an Emmy. 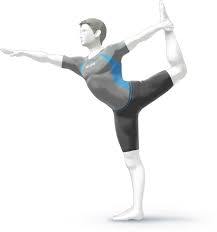 The scores from my old Wii warrior days taunted me whilst my Vicki meme hung her head in shame after every challenge. My balance was wobble city... my deftness, deftless... my coordination, crap.

Nearing the end, I got to the meditation. I scored PROFESSIONAL. So, I did it thrice and gave my instructor the finger. You're only as good as your last challenge, motherfucker. Let's see you do absolutely nothing better than me.