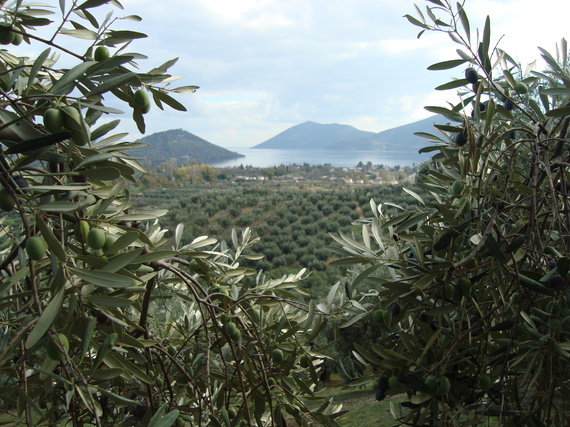 "A little goes a long way" is usually the mantra of the travel companies encouraging clients to take advantage of Greece, this economically-beleaguered but scenic and hospitable country. I notice here on Aegina Island that huge tourist coaches are on the increase. They careen these mountain roads on a race to the sites before returning to the ferry for the dash to the next island of their one-day tour.

Every country is known primarily by its collective cultural persona. The national character is perceived by the behavior of politicians, bureaucrats and the effect of its economic skill and power in the global game. And when a country is disadvantaged by these standards, the world rushes in to take advantage. Or so it seems.

Underneath the skin of the collective national persona are 11 million plus stories. I am one of them. I am Philhellene. I chose to come here from a more "advantaged" country because there is a pulse to this land that is hard to measure by our material standards. It is beguilingly beautiful from north to south and east to west including its hundreds of islands with such diversity of ancient mountains, teal blue seas and rich arable lands. In the still-wild mountains, herbs and wildflowers grow in unmolested natural abundance. Six thousand species of flora and 200 species of olive trees offer up a precious pharmacopeia unmatched in most other lands.

There is a reverence for what matters in life notwithstanding the hardships that bend the spirit, but somehow strengthen what really matters. Tight family bonds, the pleasure of unhurried time spent with friends at a café -- the simple foods, simple pleasures and simple values. This is why I came and this is why I stay. But I ended up with something more than what I bargained for and there is a certain irony in it.

Long before I dreamed of living in Greece, I incorporated a company called Artemis Alliance Inc. It has had many faces, but all were of a holistic nature pursuing what is authentic, healthy, creative and vibrant in life. The irony is today that company is in partnership with the University of Athens and has a patent (pending) for an in-the-field test kit to measure the health protective compounds in EVOO, Extra Virgin Olive Oil, (once again Artemis is the protector of virgins). These phenolic compounds are oleocanthal and oleacein, only found in olive oil. Studies around the world are researching these compounds for the prevention and/or treatment of Alzheimer's, arthritis, cancer and other illnesses.

My partner Athan and I adhere to the Hippocratic doctrine of "let food be thy medicine and medicine be thy food" and it was an easy trail to the Hippocratic writings about the healing benefits of early harvest olive oil. From here we discovered unprecedented research based on these same ancient writings conducted by Drs. Prokopios Magiatis, Ph.D. and Elleni Melliou, Ph.D. at the University of Athens.

We met on several occasions and Athan has written extensively in other media of the research method invented by Magiatis and Melliou for measuring individual compounds in olive oil using NMR (nuclear magnetic resonance). Research, incidentally, that has been acknowledged worldwide but marginalized here in Greece.

When the question of how a simple inexpensive test kit might change the way an olive grower or mill would sort and price their olive oil, we all saw the immediate advantage to the Greek olive oil industry in a global market. For too long, the industry has lacked cohesive marketing support with much of the production sold, often internationally, for low bulk prices. Again, commercial interests benefiting from growers economically stressed and, in many cases, subsistence farming.

But, funding had been cut. The crisis had the university in a grip. At one meeting at the university laboratory, we learned that the professors had to clean their own washrooms. There was no maintenance staff. The halls were dark. Cutting funding to research and innovation is the death knell of any culture that would proceed into the future with verve and independence. What could we do to help?

Well, it turned out that as a result of a little investment in research and funding of the patent, Eurobank has now named this invention in the top ten finalists in a contest run for innovation in Greece.* What this partnership means is that the more successful we market and sell this kit, the more it benefits the university. This is good for us. It is good for the university and it is good for the many growers who will learn the best way of harvesting and production to create an olive oil that is measurably the most health promoting of any on the market. This in turn making the ultimate beneficiary, the health conscious consumer. The name of this innovation? Why, Aristoleo, which in Greek simply means "excellent oil." 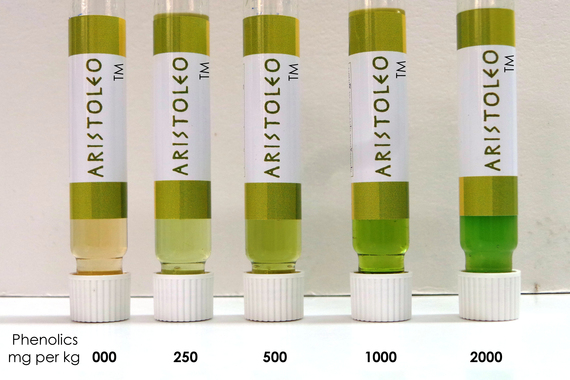 The olive represents Greece for good reason. It is the symbol of resilience and long life under difficult conditions. For me it is the symbol of the Greek spirit that I so love and respect. It seems only fitting that Greek EVOO takes its place on the global market for excellence and that two Greek scientists working with inspiration and diligence from an idea scripted millennia ago are setting a new standard for excellence.

There are many brilliant minds right here, right now in this country that for wont of recognition, trust and a little funding will go a long way to the change the course of the economic wellbeing of Greece.

*The announcement of finalists and prizes was postponed from July 9, 2015 due to capital controls. Eurobank expects to make the announcement sometime in October.

Watch for my next post when I share that when it comes to the healthiest olive oil bitter is better!

Yesterday at Justin's
by Marilyn Harding

Exhilarated Life: Happiness Ever After
by Marilyn Harding