Merriam-Webster just added "emoji," "meme," "WTF" and "clickbait" to the dictionary among 1,700 new words, meaning that the Internet has succeeded in ruining the English language.

In a blog post, Merriam-Webster noted that some of the new words are "kind of goofy" and some come from the "not-so-natural world," including "net neutrality," "dark money," "click fraud," "photobomb" and "NSFW." We'll take just a little credit: The entry for "jegging" includes a citation from a HuffPost article, and another citation for "clickbait" refers to "those seductive Huffington Post-esque headlines." 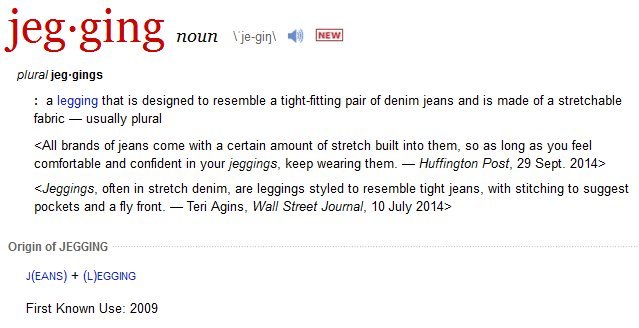 The dictionary site reports that its editors identify new words by spending an hour or two each day reading newly published material, online and otherwise, and checking for new and common word usage.

You can read more about new words you've probably never heard, like "eggcorn," by clicking here, or check out some of the best additions below, as compiled by Time magazine:

eggcorn (n.)
Definition: a word or phrase that sounds like and is mistakenly used in a seemingly logical or plausible way for another word or phrase either on its own or as part of a set expression.

colossal squid (n.)
Definition: an extremely large squid occurring in deep waters of the Southern Ocean that is the largest known living invertebrate.

vocal fry (n.)
Definition: a vocal effect produced by very slow vibration of the vocal cords and characterized by a creaking sound and low pitch.