Here at the Huffington Post, we got an e-mail yesterday from Senator Barack Obama's presidential campaign. It included the following image: 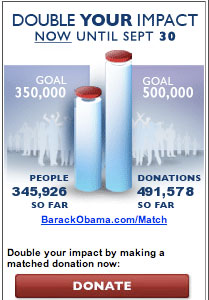 I showed it to a co-worker sitting to my right. "Do you think that looks like..."

And the quick answer was, "Dude, that's making me *want* a cigarette."

Which is funny because the following exchange transpired during Wednesday night's debate in Hanover, New Hampshire:

MR. RUSSERT: Have you been successful in stopping smoking?

So, while it may be commonplace that Presidential advertisements feature subliminal messages these days, this may be the first time in the history of political communications that a candidate's subconscious jonesing for a smoke has worked its way into his campaign literature.