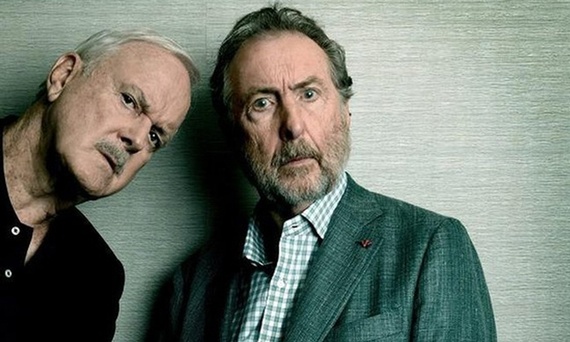 There is probably nothing more annoying than being an icon. You're tweeted at, buzzed for selfies, held to impossible standards and rarely drive yourself so can't use it for getting out of tickets. Oh, wait, you can also be bothered constantly at restaurants.

But on evenings like Friday last at the Pasadena Civic Center you can still use it to shock and surprise your deeply devoted fan base who still shows up through hell and high water to hear new ways you've decided to amuse yourselves.

And here we learn that John Cleese, and Eric Idle, who bemusedly call their current tour "Together Again At Last, For The Very First Time," backed their way accidentally into becoming comic superstars, merely because, as John Cleese stated several times during the evening "we got very lucky, can you imagine!"

The evening was splendid anecdotal history of their comic adventures and body of work, some of which has become embedded in the molecules of generations who have enjoyed their comedy from Python, to The Rutles, to Fawlty Towers, to the Python Movies and most recently to Broadway with Spamalot and their last live show at 02 in London which was an international success. Their story telling about how it all came about is as funny as their achievements.

The troupe that would become Monty Python and affect comedy as profoundly as the Beatles affected popular music, worked separately on different BBC shows until coming together on the David Frost Show.

Some sketches they unearthed and performed from these early TV appearances have been lost to time and can no longer be found. Others from their Cambridge University days Cleese shared a tidbit of, which was the news from the BBC:BC as his 'anchorman' related:

Moses reports he's still in negations with God. Good news; he's got him down to ten. Bad news; adultery is still in.

The roar of laughter from the audience does reveal a truth we've all known since Monty Python hit the airwaves in England in the 60s, and America in the 70s, that these irreverent goons, as Eric Idle said praising John Cleese and Graham Chapman 'had perfected the three minute sketch." And perfect it the Monty Python troupe had. They are the comedy gold standard for absurdist comic brilliance which has never been duplicated or surpassed. Their albums, books and feature film successes spread their lunacy even further across the globe and it's safe to say many across the world know some of their best lines from "I'm not dead yet," to "It's just a flesh wound," to "I'd like to buy and argument" as well as the department of Silly Walks. 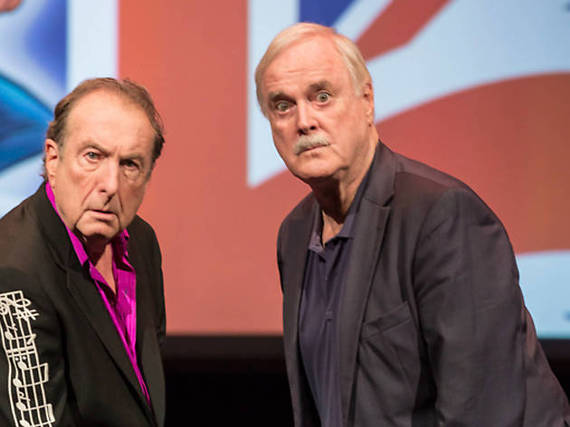 "We were lucky with Python, because by then we were really just doing what we wanted," Cleese said sharing a story about the origin days of their first show all together. They had a meeting with the head of programming at the BBC, a meeting Cleese described the troupe as being terribly unprepared for. They pitched their show (coming off their comic success on the David Frost Show and Do Not Adjust Your Set), as essentially being along the lines of: "It will be a show...where we'll be doing things...that we think are funny." An undue pause in the room was followed by an approval for 13 episodes and they were off and running, worried that they got the job and now had to come up with something.

Earlier restrictions on writing content on their other BBC shows inspired them to be sillier than ever, as no one was there to tell them not to. When they started cracking each other up, they were inspired to go even sillier and they never looked back.

Humble and kind to each other throughout the evening, the two larger than life figures made pains to prove that they were really just normal human beings who liked to poke fun and shock people. They shared stories, performed a few old and now lost sketches (as Cleese shared the early tapes at the BBC were re-used every week and the previous week's programming erased!) "Can you imagine?" he protested. Idle performed several of his most famous songs including "The Galaxy Song" as well as "Always Look On The Bright Side Of Life," and sang two new songs, "F*$K Selfies" as well as "F*$k Christmas," and Cleese performed the eulogy he gave to his best friend, writing partner, the too early departed Graham Chapman, which was so inappropriate and offensive at the time it has also now gone viral on the internet. Cleese pointed out that nothing would have delighted 'old Graham' more and he was sure it made him happy.

For those of you whose lives have been touched by these two merry makers and their colleagues' lunacy, you are no doubt better for it and to see them in person is a delight. We can only hope that the bothersome mantel of Icon is not too heavy a burden to bear for the hours of carefully orchestrated thoughtlessness that they have gifted us, an unparalleled comedy legacy.

So the next time, probably in the next five minutes, when they are approached by yet another stranger who treats them if they are old friends, I hope they can be at peace knowing it's really just their own fault for making us love them that much, by shattering our defenses by causing helpless laughter for which we will forever hold them in our hearts.

The "Together Again At Last For The Very First Time" tour continues through December 3rd, dates and times here.