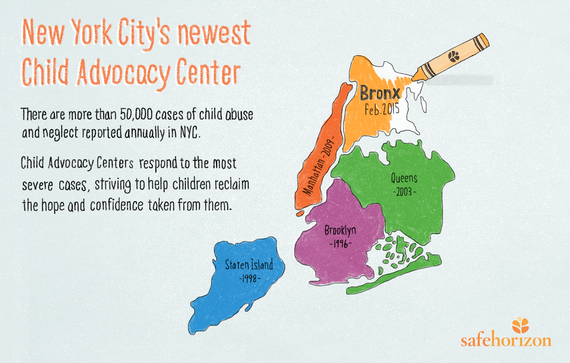 When most people hear the word "trafficked" they think of drug smuggling, or of young women being sexually exploited by a pimp. We may think of victims being moved across international borders and forced into abusive work conditions. What is less recognized is the other face of trafficking as it plays out right here at home. Whether we recognize it or not, children are being exploited in our own communities across the United States.

When international trafficking makes the headlines while domestic exploitation is all but ignored, we develop a blind spot that deprives us of opportunities to address the problem. At Safe Horizon, we know child trafficking is a pervasive problem, because we are seeing survivors not just through our Anti-Trafficking Program, but through our Child Advocacy Centers (CACs) and at Streetwork Project, our homeless youth program.

Trafficked children are deprived of their innocence and often prevented from attending school and socializing with their peers. I can't think of a more poignant example than the story of Brian and Katy.

Eight year-old Brian and his five-year old sister Katy had missed too many days of school, prompting an investigation of parental neglect. They were sent to a foster home where they disclosed a nightmarish story in which their mother forced them to perform sexual acts with adults for money and later "rewarded" them with a dollar to buy candy. Their foster parents quickly reported this information and Brian and Katy came to a Safe Horizon Child Advocacy Center. Police and prosecutors were able to identify many of the adults who sexually abused them and they are now facing long prison terms. Brian and Katy are safe from abuse and a team of experts at the CAC put in place a plan to ensure the children's future safety and healing.

It is difficult to measure a crime that is notoriously underreported and often overlooked. Experts believe that hundreds of thousands of people in the United States are forced to work under coercive, slavery-like conditions, many of them children.

Through research and advocacy work we know that domestic trafficking of children is far more common than most Americans believe, and more underreported. It can take the form of sexual exploitation, like what happened to Brian and Katy. And, it can take other forms. Some traffickers force children to work in peddling rings, selling magazines or candy on street corners or in suburban neighborhoods. Others put children to work involuntarily in agricultural or domestic settings.

As we grapple with the growing trafficking problem in our country, it's important that we are equally informed, concerned, and moved to act, whether a child is the victim of labor exploitation or the victim of commercial sexual exploitation.

This February, with the opening of the Safe Horizon Child Advocacy Center in the Bronx, every borough in New York City will have an ally in fighting child abuse and trafficking. The Bronx CAC will likely see the highest volume of child abuse cases in the country, and it will be a lifesaving resource for children in trafficking situations.

Having the systems and laws that stop abuse, heal children and seek justice in New York City and around the world are essential, but none of this would be effective without one critical component. Child victims of abuse and trafficking, whether for labor or sexual exploitation, need you.

Children are protected from abuse because someone cares enough to say something to people that can help.

Child trafficking is a cruel form of abuse that profits from children's innocence and vulnerability. The next time that you that suspect a child might be a victim of abuse, seriously ask yourself: does this child need my help? It's better to do something and be wrong than not to do anything and be right.