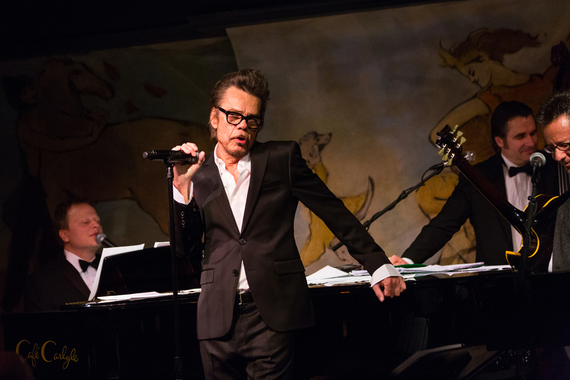 Light years ahead of his time, adorned in heels and in drag, before it was chic, the lead singer of The New York Dolls, David Johanson, forefather of "punk," took his alter-ego, Buster Poindexter, and once again made history in a spectacular one man cabaret performance at the opulent and luxurious, Cafe Carlyle in the heart of New York City.

The eclectic entertainer, comfortably made his way through the intimate venue as though he was always meant to be there, and magically bedazzled the fanatics with his opening number, "Cub A Go-Go." He continued to soulfully and passionately arouse the delighted viewers with his captivating charm, his enchanting stage presence and his special brand of humor.

The audience chanted, "It never gets old," "isn't he amazing," "I love that song," as he crooned his way to sensation. Bringing with him his 5 piece band, and his beautiful wife, Mara, Poindexter treated the congregation to songs ranging from Broadway to Janis Joplin and everything in between. The crowd continued to laugh at his playful witticism, and reveled at his superb harmonica solos.

His compelling rendition of "Piece of My Heart," was unprecedented, and his heartwarming musical interpretation of "Oh Me Oh My ( I'm A Fool For You Baby)," caused the onlookers to melt.

The surprising grand finale concluded, as he and Mara, embraced one of his most celebrated songs, " Hot, Hot, Hot." The two departed the stage and coaxed the crowd into following them around the palatial setting, in what became a tremendous Conga line.

I've experienced this audacious performer several times, and each time his shows dazzle with life and sparkle with a warm sensationalism. Silently I am constantly thanking him for his influences to the punk world, and such artists as : Billy Idol, Guns and Roses, The Ramones and Adam Ant, among the many others.

Aside from the gift of song and humor, Johansen is an accomplished actor, having appeared in films including, Scrooged, where he portrayed, "The Ghost of Christmas Past," Let It Ride, Car 54, Where Are You?, Tales From the Darkside: The Movie, The Aviator and also had a supporting role in Freejack, with Mick Jagger. He has appeared on the HBO series, Oz, The Adventures of Pete and Pete, The Jim Henson Hour, with The Muppets and Miami Vice. His unique and vast career has also led him to host a weekly show, The Mansion of Fun, on Sirius radio.