I recently had the great pleasure of speaking with two of the best and brightest enterprise thought leaders, and members of the Gillmor Gang, about marketing influence. Salesforce.com's executives Steve Gillmor, Head of Technical Media Strategy and John Taschek, VP of Strategy, agree that the role of influencer marketing (a term they actually reject in place of market strategy) is not about them influencing other people. Instead, they look to be influenced by others, in order to guide the direction of their company, enabling them to make their products better for their customers. According to Taschek, "We have an outbound role to provide enough education to anybody to get the level of feedback necessary to change, add and refine product direction or messaging internally." This thinking is in stark contrast to most companies that approach influence from the other way around, which is to make sure that all the influencers out there are comfortable, taken care of and organized. At the end of the day their reversal of influence approach comes down to helping their customers. 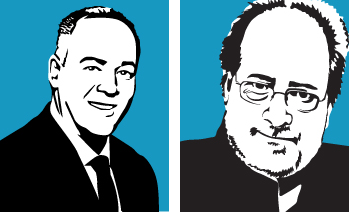 The interesting caveat is that even though their purpose is to reverse the role on influence, there's no denying that when it comes to marketing automation thought leadership, Gillmor and Taschek are one influential duo. As a matter of fact Steve Gillmor's, The Gillmor Gang, enterprise web video-cast on TechCrunch was the influence for CXOTalk. Our discussions did focus on customer driven marketing strategy and the reverse role of influence and the power of gaining insight from the outside, in.

Five Ways to Reverse the Role of Influence to Help Customers

1. Seek not to influence, but to be influenced - One thing that the massive disruption of mobile, social and cloud have brought to light is that the customer is in charge. We have to listen to them and hopefully engage with them. "The issue of influence for most companies is the exact opposite of the way we look at what is going on, we are not trying to influence, we want to be influenced by the people out there that know what is going on," says Gillmor. Those "people" are their customers. It then becomes all about trying to take that knowledge and accelerate it through the product groups. "We are always listening, but we are also acting and taking the feedback and getting it directly into the product strategy groups," says Taschek.

Salesforce.com goes beyond the basic marketing automation of traditional CRM systems by helping companies to create a more direct connection and engage with their customers through a platform that extends across the broad spectrum of the relationship with that customer to create a seamless experience across all of the customer touch points.

2. Build Influence Internally by Listening - Being who they are, Taschek and Gillmor are used to the idea that they are going to be spoken to as if they are influencers. "I think people resent being spoken to for the purpose of something, people like to engage with each other," says Gillmor. This is why it's really important to establish an understanding that you are listening as much as you are trying to send a message. This idea is what informs how they approach building influence internally.

4. It's not about where the budget sits, but where the conversation starts - There is a lot of hype around who controls the IT budget - a Gartner report says that by 2017 tech spend will be mostly outside of IT and in different Lines of Business (LOB), such as marketing. Taschek says that because of the consumerization of IT, marketing is looking for ways to adapt to this technical shift by creating products that are more about consumer engagement. But IT is not going away; quite the contrary. They will be tasked with the all-important job of creating the supporting architecture and infrastructure needed to support everything marketing is doing. As marketing fuels up, so does IT and everyone ends up at the same table.

Taschek advises companies not to get too caught up in where the budget sits, but to let the customer be the influencer. It needs to be about how the customer wants to approach the problem. Sometimes they come at it from an IT initiative, sometimes it's a marketing perspective or it could begin in sales or customer service. The key is to start conversations where the issues develop and help the customer across the LOBs. Taschek says "We don't really care where the budget sits, it's where the conversation starts, which may not be where the technology or solution ends up. From a sales strategy we look to go after the problem."

5. Marketing influence is market strategy built from the influence of others - At the Evernote conference, Salesforce.com's Chairman and CEO, Marc Benioff spoke to the fact that there is now so much power embedded in mobile phones that most consumers are basically just using their mobile phones for everything - and that includes Benioff himself. With 5 billion connected mobile devices out there in the near future, Salesforce is putting their money where their mouth is by talking this consumer-driven mobile influence and making mobile an extremely important priority going forward.

Mobility and collaboration will be evident next month at Dreamforce, the largest vendor-led technology conference in the country, where mobile will hold a prominent spot. Not only will Salesforce.com be doing things on mobile, but their partners are building mobile apps on their platform, customers will bring their mobile devices, speakers will be talking about their mobile solutions, demos will be done on mobile - the event itself is even a mobile app.

You can watch the full interview with Steve Gillmor and John Taschek here. Please join me and Michael Krigsman of Asuret every Friday at 3PM as we host CXOTalk - connecting with thought leaders and innovative executives who are pushing the boundaries within their companies and their fields.