So here I am, American born, raised a Southern Baptist and now non-religious, in my homemade burkini. It's made of a swim mask adopted from Chinese women wishing to avoid the sun (as do I), 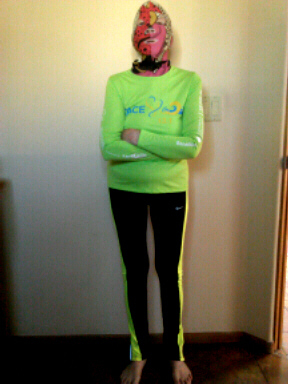 and jogging duds purchased not from a Paris burkini boutique, but from an American discount sporting goods store. I had it years before burkinis became "all the rage," in both senses of the word.

My reasons for wearing the burkini are my own. You see, I live in New Mexico, where the sun is brutal on not-so-young skin. The nights get cool here in the high desert, and so does the swimming pool water (alas, we have no public beaches here). So my combo Chinese fright mask and American lycra is a perfect solution.

My pool is in my backyard, behind a stucco wall (we have a lot of stucco in New Mexico). Anyway, the French police haven't discovered it yet, but what with Google Earth I could get nailed any day.

Obviously I wear my homemade swim regalia out of choice. So do a lot of Muslim women in their custom-made swim outfits, although some undoubtedly secretly yearn for more freedom in the water.

Opponents of the body-covering gear say it's a matter of religious oppression - women shouldn't show their bodies for fear of tempting men, who can't control their baser impulses. Keep women covered to keep men from sinning, and don't offend them, no matter what you do. (Hmmm - maybe the 70-something men in speedos on Copacabana beach ought to be forced to cover - talk about bodies offending the opposite sex!)

The burkini debate is pretty mild around these parts, as most churches are Catholic, where control of women's choices runs to contraception and abortion instead of swimwear selection. I've only met one Muslim woman in my 10 years here - she was at a Women's Equality Day rally a couple of days ago.

As a feminist I've always been about choice - especially what to do with my own body. Who else should decide whether or not I have children, grow old gracefully or go for a nip here and tuck there, eat Krispy Kremes instead of kale, drink veggie smoothies or swill sugary soft drinks? The rub seems to come in when others (otherwise known as the men who control religion) decide who decides. Do the women "choose" to cover up because they're victims of the Stockholm syndrome, identifying with their oppressors? Could be - but how can anyone else judge who's a victim and who's a decider on her own?

Like the title of the Streep/Baldwin 2009 movie says - It's Complicated.

Gotta dive in now, before the water gets too cold and the debate gets even hotter for me and my burkini.